As foreign investments decline, Nureddin Nebati's promise to "take the bureaucracy down" raises concerns at home and abroad about evading the rule of law. 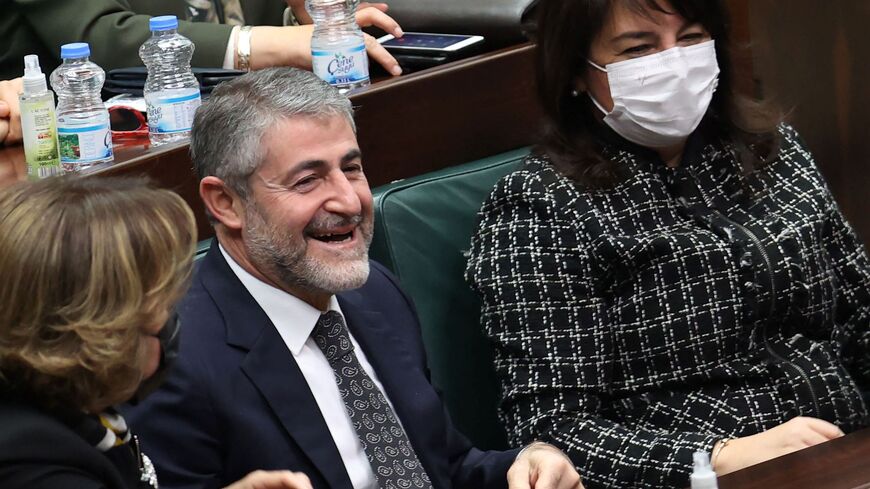 Turkish Treasury and Finance Minister Nureddin Nebati made the headlines this week with a pledge to “take down” his country’s bureaucracy as he courted foreign investors in France. Though Turkey is no stranger to red tape, excessive bureaucracy is hardly the culprit impeding foreign investments that Turkey’s ailing economy badly needs today.

Addressing a meeting with international investors in Cannes on March 16, Nebati said the presidential investment office would extend all support to foreign investors and be their “one stop” in resolving snags. He continued, “What I dislike the most are those laws and regulations or the bureaucracy, which hamper investors. Let’s fight them together. We can take the bureaucracy down — the president is behind us, rest assured. We can change laws and regulations as well. We act expeditiously under the presidential system.”

The minister was referring to the executive presidency system, to which Turkey transitioned in 2018, concentrating power in President Recep Tayyip Erdogan’s hands. Erdogan had pledged the new system would expedite decision-making and make the government more efficient, but four years on, his governance is widely criticized as a one-man rule that has eroded checks and balances, tightened control over the judiciary and debilitated parliament and other institutions. Erdogan is often under fire for flouting the law and making arbitrary decisions, including economic policies that contravene conventional economic theory.

The opposition saw Nebati’s remarks as dangling an unlikely carrot in front of foreign investors, that is, a promise that Ankara would not hesitate to flout laws and regulations to attract much-needed foreign capital.

Faik Oztrak, spokesman of the main opposition Republican People’s Party, said the minister “could not have put it more plainly that institutions and laws in this country hinge on the words of one man and that no legal security exists.”

Ugur Poyraz, secretary-general of the Good Party, likened the minister to a “second-hand phone seller who touts himself as the warranty,” while Idris Sahin, spokesman of the Democracy and Progress Party, said that “what hampers investments is not the bureaucracy but the autocracy.”

Indeed, Nebati seemed to imply that rules and institutions in Turkey, which he disparaged as red tape, had been obstructing foreign investments. In reality, the executive presidency system itself is at the core of the shifts that have curbed the flow of foreign investments. Foreign direct investment (FDI), in particular, has drastically dropped.

Foreign investors value the rule of law as well as governance that is fair to all entrepreneurs and avoids nepotism — something that the ruling Justice and Development Party (AKP) apparently has yet to grasp. Foreign investors also require a stable economy, single-digit inflation, and a steady investment environment — conditions that Turkey hardly meets at present.

Economic instability has only grown since Erdogan assumed sweeping executive powers in 2018. Inflation stands out as the gravest problem, having soared to 54.4% in February. The fallout of Russia’s invasion of Ukraine has made matters worse, with Turkey’s risk premium surging to the region of 600 basis points. The current account deficit has already reached $20 billion this year and is bound to grow further. The nation’s external debts maturing over the next 12 months total about $174 billion. All those factors could plunge the embattled Turkish lira into a fresh tailspin down the road. The currency lost more than 40% of its value against the dollar in 2021 alone.

In this economic environment, the flow of foreign capital to Turkey, including direct investments, portfolio investments through the stock market, bank deposits and loans, has stagnated in recent years.

An important indicator here is the net international investment position -- the gap between a nation’s assets, comprised of external investments and foreign reserves, and its liabilities or the foreign stock of that nation's assets.

At the end of 2021, Turkey’s foreign investments and foreign reserves totaled $298 billion, while the foreign stock of assets in Turkey amounted to $528 billion, meaning a net of $230 billion in foreign resources – a 48% decrease from $442 billion in 2017.

In the same period, direct foreign investments dropped 38% to $122 billion, while portfolio investments decreased 45% to $77 billion. In terms of deposits, swaps and loans, the decrease was just 3%. Overall, the stock value of foreign assets in Turkey dropped by nearly 24% from 2017 to 2021.

Clearly, foreign investors have grown reluctant to put money in Turkey. In the past three years, FDI averaged some $7.5 billion a year, but the figure includes foreign purchases of real estate. Excluding those purchases, the figure drops to less than $2 billion a year. The last time FDI reached $10 billion was in 2015, having hit $17 billion in 2007, the highest level under the AKP’s two-decade rule.

Foreign appetite for Turkish stock shares and government bonds has declined as well. And now that the US Federal Reserve has raised rates by 25 basis points, signaling six other hikes this year, drawing foreign investors to emerging economies is bound to become harder.

Foreign investors are certainly wary of the slide to authoritarianism and erosion of the rule of law under Erdogan, but economic fragilities and structural downsides are equally influential in discouraging investment.

Asian, Latin American and African countries with troubled political systems, albeit not as much as Turkey’s, have continued to draw foreign funds thanks to their relative economic stability. IMF data show that Indonesia and India, for instance, are leaders in Asia in terms of attracting net foreign funds. China is already a paradise for foreign investors, but the country also boasts major investments overseas and is even a “net investor.” Chinese foreign investments exceed foreign assets in China by $2 trillion.

To maintain a stable economic growth, Turkey needs to restore its appeal to foreign investors, both in terms of direct investments and capital flows to the stock market and government bonds. To achieve that, it must ensure the rule of law, an independent and impartial judiciary, checks and balances, transparency and accountability. Equally important are measures to put the economy back on track, particularly to rein in inflation and restore the investment climate — which, obviously, requires a government capable of doing all that.