Arriving for a top-level visit in Ankara after years of tense relations, Dutch Prime Minister Mark Rutte says he would like Turkey to join sanctions against Russia but understands Ankara’s unique position. 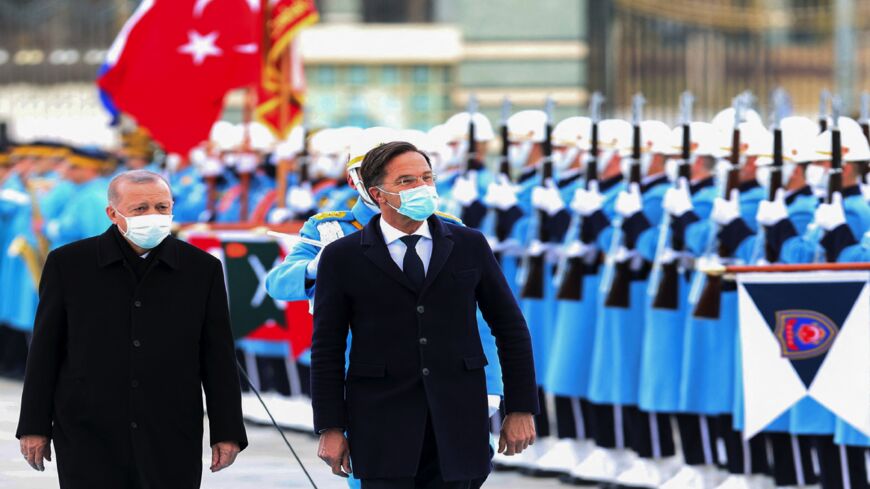 Arriving for a top visit to the Turkish capital after years of strained bilateral ties, Dutch Prime Minister Mark Rutte expressed support for Ankara’s mediation efforts between Ukraine and Russia.

Rutte arrived in Ankara Tuesday on the last leg of his three-leg tour that included Lithuania and Poland ahead of a NATO summit on Ukraine scheduled for March 24.

As Rutte described Erdogan as one of the few leaders with “an open line” to both warring parties, the Turkish president pledged to continue his mediation efforts with Ukraine and Russia.

“I know that the conditions are difficult, but diplomacy is the only option,” he said at the joint press conference. While Rutte praised Turkey’s role in bringing together the two sides, he warned that the current situation, particularly the scenes of innocent civilians targeted in the Ukrainian city of Mariupol, cast a dark light.

Ahead of the visit, Rutte said he considers it essential that more countries within NATO have close contact with the government in Ankara. "Turkey is crucial for the defense of the eastern flank," he said, a message he repeated before Erdogan. "Turkey is also an important partner for the European Union," he added, as Erdogan replied that Turkey expected EU to open new chapters for Turkish accession and begin negotiations on Customs Union “as soon as possible."

For Erik-Jan Zurcher, an author and a professor of Turkish history, Rutte's visit aims to get Erdogan as much as possible into the Western camp. “Rutte wants Turkey — which does not participate in the sanctions against Russia — to align as much as possible with NATO and the EU,” he told RTL news.

Zurcher claimed that Turkey’s reluctance to join the sanctions weakens them. “Turkey, especially Istanbul, has become the route for all Russians who still want to go to the outside world,” he said, explaining that they flew via Dubai or Asian cities via Istanbul.

The remarks come as two super yachts linked to Russian billionaire Roman Abramovich docked off Turkish Mediterranean coasts. Sources familiar with the discussions said he and other wealthy Russians were looking to invest in Turkey given sanctions elsewhere.

Earlier Tuesday, Turkish Foreign Minister Mevlut Cavusoglu said that this week's meeting between NATO leaders should focus on securing a cease-fire in Russia's invasion of Ukraine and “not just on sanctions and deterrence.”

"Everyone's first aim should be a cease-fire," Cavusoglu said Tuesday on the sidelines of an Organization of Islamic Cooperation meeting in Pakistan. “Of course, we need to show unity and solidarity within NATO. We need to show deterrence. But who is paying the price of the ongoing war?”

NATO Secretary-General Jens Stoltenberg said on Sunday that the meeting is intended not just to show NATO’s “support to Ukraine, but also our readiness to protect and defend all NATO allies.”

“Our main responsibility is to make sure that all allies are safe and secure and that we provide a deterrence and defense to them, and that's the reason why we already have increased our presence, the military presence of NATO forces in the eastern part of the alliance,” he told CBS's “Face the Nation.”

Erdogan is expected to meet US President Joe Biden during the NATO summit in Brussels, Erdogan’s spokesman Ibrahim Kalin said. “We have a series of bilateral talks, including with the US president,” he said, adding that he will meet with Jake Sullivan, the US national security adviser.

It is not clear whether Rutte and Erdogan would meet again Thursday, but the cordial tone indicated that the two leaders buried the hatchet of 2017. Five years ago, on the eve of a critical referendum establishing a presidential system in Turkey, Rutte blocked two Turkish ministers from leading a Rotterdam campaign rally that supported Erdogan’s bid for more power. The Turkish leader, outraged that police barred Social Affairs Minister Betul Kaya from entering her country’s consulate, spat fire at The Hague. As Erdogan called the Dutch government "Nazi remnants and fascists,” AKP deputies walked off from the parliamentary Dutch-Turkish friendship group. Other reactions bordered on the ridiculous. Turkey’s Red Meat Producers Association sent 40 Dutch Holstein cows back to the Netherlands. A group of AKP youth branches expressed their anger by cutting and squashing oranges — a reference to the official color of the Netherlands. Some of the keyboard-zealous Turks on Twitter mistook Francois Holland, then the French president, as the leader of Holland and showered him with messages accusing him of being a Nazi, leading daily newspaper Sozcu to publish a sardonic guide titled “How to Protest the Dutch.”

The standoff between the two allies led Stoltenberg to invite both to show restraint, saying, "I really believe that we should be focused on the threats and challenges we see from outside the alliance.”

By the end of 2018, relations were partially patched up as the two countries reappointed ambassadors. Saban Disli, a Dutch-speaking AKP member and former bank director in Amsterdam, was appointed to The Hague, while the Netherlands appointed Marjanne de Kwaasteniet, a senior career diplomat who served as the country’s permanent representative to NATO.

Despite strains over human rights, the Netherlands remains among Turkey’s top economic partners. In 2021, bilateral trade volume in goods and services between the two countries stood at $11 billion 280 million, with Turkish exports at $6.77 billion and imports at $4.51 billion. Moreover, in 2021, the Netherlands was the top investor in Turkey, with direct investments at $27.28 billion.

“We have agreed to improve the trade volume first to 15 billion and then to 20 billion,” Erdogan said at the press conference, adding he hoped there would be more tourists once the Netherlands places Turkey on the green list after the pandemic.