Turkish Health Minister Fahrettin Koca announces a return to normal life after two years of COVID-19 measures, but medical association warns it may be too early. 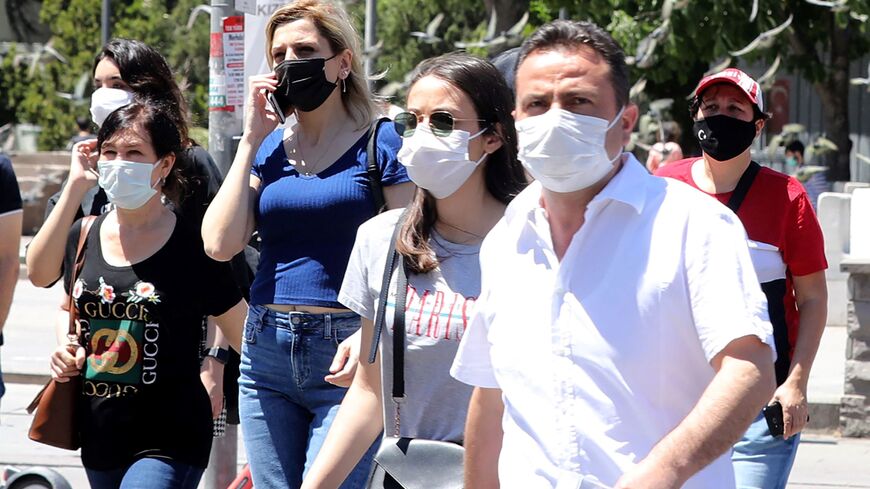 People wearing face masks as a protection against the coronavirus walk in a street in Ankara on May 21, 21021. - ADEM ALTAN/AFP via Getty Images

Turkey, which has suffered roughly 95,000 deaths due to COVID-19 since March 2019, announced Wednesday it was dropping mask requirements outdoors and in “well-ventilated” indoor areas.

The move indicates that Turkey is moving toward normalization before the critical spring-summer tourism season, though tourism managers worry that the Russian invasion of Ukraine will deliver a new blow, as both countries are on Turkey’s top-ten tourists list.

“I, who have always urged caution and strict adherence to anti-pandemic measures throughout two years, appear before you today to signal normalization,” Fahrettin Koca, Turkey’s health minister, said at a press conference late Wednesday.

Turkey’s announcement comes a day after American President Joe Biden announced his State of the Union speech Tuesday night that the world had “reached a new moment” in the coronavirus pandemic and called on Americans to begin resuming their pre-COVID-19 routines.

Koca has communicated with the public through terse tweets ever since the first official COVID-19 case in Turkey on March 11, 2019. He chided anti-vaxxers, shared photos of recovered patients and tired doctors and, most often, urged social distancing in weddings.

But after he announced that the masks could come off, Koca’s usually tense face relaxed momentarily. “We missed seeing each other smile,” he said in an untypically light tone.

Though Koca said that masks could be scrapped indoors if the room was well-ventilated, he added that they are still necessary in buses, airplanes, cinema and concert halls where people sit close together.

Under the new rules, Turks would no longer need to display their HES QR code — a Health Ministry document based on personal health records — upon entering banks, malls or other venues. "COVID-19 tests will not be required for those who display no visible symptoms," he added.

In schools, classes will no longer be closed down if there are two or more students who test positive; instead, the students will be isolated.

Normalization will be implemented “right away if you like," Koca said, "but we expect to see an Interior Ministry regulation shortly, with further details.”

The Turkish Medical Association responded that dropping mask requirements is not a good idea, given that 10 million people are still not vaccinated and there have been 1,000 deaths weekly. “The health ministry should do its job to ensure that more people get vaccinated rather than focus on masks,” the association tweeted.

Koca admitted in the press conference that some members of the health sector, including the ministry’s own advisers, thought the move toward normalization was early. “There are perfectly respectable members of the medical profession who think that we should be prudent a bit more,” said Koca, as he heaped praise on the medical sector.

Turkey’s beleaguered doctors and health professionals have launched several nationwide strikes in the last six months to protest hard conditions, long hours and lack of financial compensation. Turkish Medical Association chair Sebnem Korur Fincanci said that the association is suing the ministries of health and of labor to court for not taking adequate measures to protect health workers during the pandemic.

Journalists asked Koca whether music in restaurants and bars after midnight would be allowed. That ban by Erdogan had been widely criticized as an arbitrary measure to undermine the nightlife and alcohol-serving restaurants and bars in Turkey. “There is no decision of [Health Ministry’s advisory] Scientific Council, but I believe that such restrictions would be lifted soon,” Koca said.

The two-year pandemic has put its mark on the Turkish economy, both in spurring unemployment and in devastating the tourism sector, which accounts for roughly 12 percent of Turkey’s GDP in normal times. Though some restrictions were relaxed in the summer of 2021, tourism revenues were halved, particularly because residents of the UK, Russia, and Ukraine came in much lower numbers.

The normalization comes after the Health Ministry’s announcement last week that cases have declined. Turkey’s Achilles heel is the Black Sea region, which had overall had the highest number of cases in its northeast. The eastern provinces, on the other hand, have a low vaccination percentage.

In January, both Koca and President Recep Tayyip Erdogan announced a peak in the COVID-19 cases caused by the omicron variant — but with fewer people hospitalized and fewer deaths. Erdogan added that the development of Turkey’s homegrown vaccine, Turkovac, was also good news. Since then, some 600,000 doses of Turkovac have been administered, including to Koca himself, members of his team and National Movement Party’s 74-year-old chair Devlet Bahceli. Turkovac is still waiting for approval from World Health Organization.

Turkey has administered more than 146 million doses of Sinovac, Turkovac and Pfizer-Biontech since 2021. The number of people with two doses of vaccine exceeds 52.8 million, while another 27 million got a third dose. Turkey’s total population is 84 million.

In mid-February, daily COVID-19 cases dropped to 69,000, a far cry from more than 111,000 in early February. It is expected to drop further, as the number is interpreted as a result of the mid-semester break in the schools.