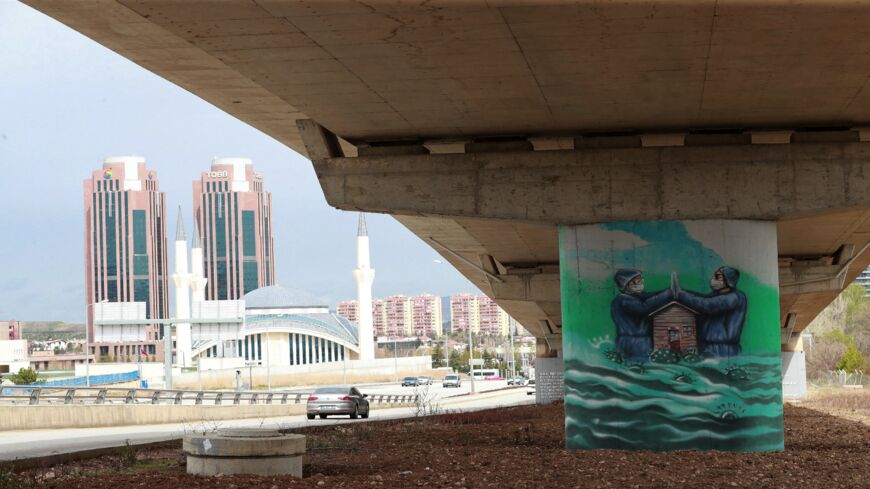 Ankara's Metropolitan Municipality has used graffiti to symbolize the work and dedication of health care workers during the COVID-19 pandemic in the City Hospital region of Ankara on April 19, 2021. - ADEM ALTAN/AFP via Getty Images

Turkey is currently second in the world in daily COVID-19 cases per capita.

The average daily amount of coronavirus cases in Turkey over the past seven days was 710.46 cases per 1 million people yesterday. This was second only to Uruguay in South America with 826.7 cases per million people. The second highest figure in the Middle East was Iran with 283.95 cases per million, followed closely by Jordan with 283.36, according to Oxford University’s Our World in Data. However, some regional states, like Syria, have unreliable data due to inadequate testing.

The Turkish Health Ministry reported 55,149 new COVID-19 infections and 341 virus-related deaths today among Turkey's population of more than 80 million. There have been more than 4.32 million cases in total as well as 36,267 deaths, according to the state media outlet Anadolu Agency. This reflects a fatality rate of only around 1%, which is similar to other developed countries.

The Turkish government also expanded its vaccine eligibility criteria today, and anyone 55 and older can now receive the vaccine. More than 12.2 million people have received their first jab, while nearly 7.8 million people have been fully vaccinated with both shots, Anadolu reported.

Authorities could face obstacles administering further vaccine doses. An April Ministry of Health survey found that only 38% of the Turkish public trusts vaccines against COVID-19.