Thousands of Turks came together in Istanbul to protest vaccinations, mandatory testing and other coronavirus measures while the country's overworked doctors lashed out at authorities for allowing the demonstration. 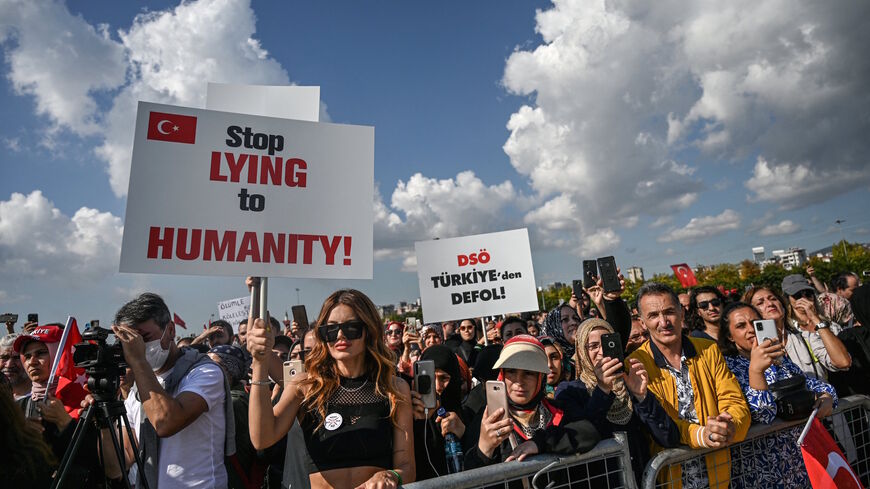 People demonstrate in protest of the coronavirus vaccine on Sept. 11, 2021, in Istanbul. - OZAN KOSE/AFP via Getty Images

“Neither masks nor vaccine” and “Turks are not guinea pigs,” shouted thousands of people who gathered in Istanbul on Saturday in the largest anti-vaccine demonstration since the beginning of the coronavirus pandemic in Turkey.

The man of the hour was arch-conservative columnist Abdurrahman Dilipak, who masterminded and led the so-called “Great Awakening Rally.” In a fiery speech he urged the government to close down the World Health Organization's office in Ankara. A man wearing a Fidel Castro-style cap waved a banner reading, “World Health Organization, get the hell out of my country.”

Dilipak, a media-savvy figure who delights in making headlines with his provocative statements and global conspiracy theories, said that Turks would not be “guinea pigs” for dubious concoctions designed to change human DNA.

“We are here to stand against global conspiracies. We are here to stand against Bill Gates,” he shouted to a cheering crowd. Some of the demonstrators carried banners directed at Gates, the co-founder of Microsoft who became the top target for various conspiracy theories. “No chips, no masks,” said one banner, alluding to the baseless claim that Microsoft used vaccines to implant trackable microchips into people.

In the country’s overwrought health sector, the surprise was not so much what Dilipak said as that the rally had been allowed to take place. For the last 18 months since the first case of COVID-19 appeared, the Turkish government and local authorities consistently forbade demonstrations, including from those by women and the LGBTI community, citing public health concerns.

Turkey’s Medical Association, which had previously urged the local authorities not to allow the rally, said that turning a blind eye to the anti-vaxxer event showed that the government was far from sincere in its efforts to combat the pandemic.

The government used the pandemic measures as an excuse to ban press statements by unions, parties and non-governmental organizations in the last 18 months, the association said in a written statement. “By keeping silent toward those who openly ignore science and oppose vaccinations," the government "has demonstrated its insincerity and unreliability in the fight against the pandemic.”

Much political zigzagging preceded the rally that was organized jointly by Dilipak, a former ally of President Recep Tayyip Erdogan who has been kept at arm’s length lately, and a new conservative party called the Anatolia Unity Party. Bahri Tiryaki, the district governor of Maltepe, initially refused to allow the rally based on public health concerns, but Anatolia Unity Party took the issue to Istanbul Governor Ali Yerlikaya, who gave the go-ahead.

The turnout could have been as high as 3,000 people. Dilipak tweeted that 10,000 people had wanted to come to the rally but were stopped by anti-pandemic rules, and he inviting them to react to the mandatory tests and the inoculation campaigns by tweeting the hashtag #everywhereisMaltepe #resistanceeverywhere. Dilipak said that the rally saw nearly 1.5 million tweets in support.

Unlike many European countries, street demonstrations against government measures during the pandemic are infrequent and quiet in Turkey, while the anti-vaxxers and the medical associations furiously argue on social media and TV. Those who stand against mandatory vaccinations come from a wide spectrum — from conservative Islamists to radical leftists such as Yildiz Tilbe, a singer who announced last month that she would not get a vaccine no matter what, but relented and got a shot when she could not travel for a concert.

Fatih Erbakan, the leader of the Islamist New Welfare Party and the estranged son of Erdogan’s late mentor Necmettin Erbakan, also raised his voice against the mandatory vaccines on Sept. 13. “None of them are tested vaccines. What we are injecting people with are in the experimental stage and toy with human DNA,” he said. “The next generations will give birth to half-human, half-monkey kids, with three ears and five eyes.”

The government kept quiet on the rally and the pro-government media sought to downplay it. The usually vocal Health Minister Fahrettin Koca merely tweeted, “The ultimate solution to deaths caused by COVID-19 is vaccination. Rules have to be respected.”

In sharp contrast to other demonstrations in which the police intervened when demonstrators wore no masks or stood too close (such as an unauthorized LGBTI demonstration in July), the protesters were not required to show proof of vaccination or a negative test and the police officials did not object when the protesters ditched their masks after passing through the security checkpoints.

As of Aug. 6, the Turkish government started requesting proof of vaccination or a negative COVID-19 test for all passengers on intercity transportation as well as in theaters and at concerts. Some restaurant owners associations are asking the government to authorize restaurant managers to request the same proof for diners.

As face-to-face education resumed around the country, Ankara urged all unvaccinated school employees to take a PCR test twice per week. On Sept. 10, Koca said that 95% of teachers had been vaccinated. Koca also said that more than 100 million jabs had been administered and 65% of the population had received a second dose of vaccine. In a press conference on Sept. 9, Koca said that new case numbers, which currently sit at more than 21,000 daily, may rise. “We may see a pandemic caused by the unvaccinated,” he said.