Democratic lawmakers are seeking a congressional watchdog study on how the State Department is tracking extraterritorial harassment by countries that benefit from US security assistance or arms, including Egypt, Saudi Arabia and Turkey. 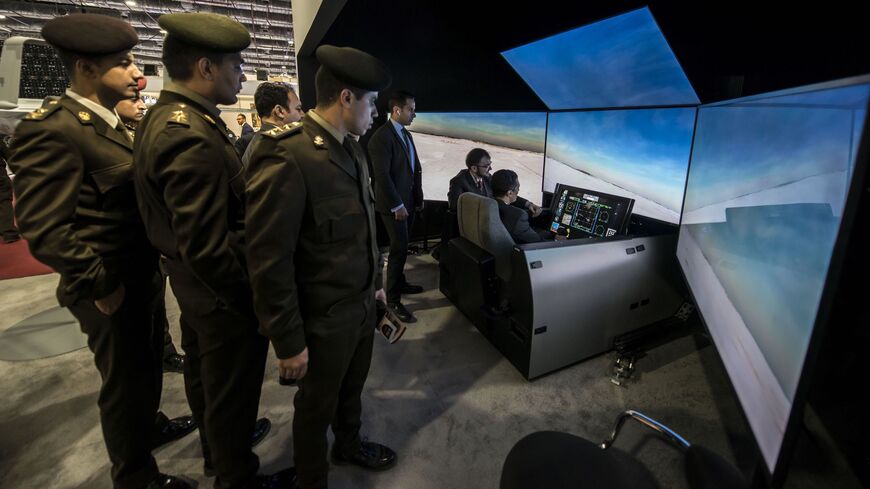 Egyptian military officers look at a simulator of the US-made F-15 jet fighter at the Boeing stand in Egypt's first Service Defense Exhibition in Cairo on Dec. 3, 2018, at the International Exhibition Center. - KHALED DESOUKI/AFP via Getty Images

Congressional Democrats are questioning whether the State Department is adequately monitoring the conduct of Saudi Arabia, Egypt and other recipients of US military aid who are known to harass critics living inside the United States.

“We write you amid a growing trend of the extraterritorial persecution, intimidation, and censorship of US citizens, legal permanent residents and others residing in the US face at the hands of US partners around the world,” read a letter spearheaded by Rep. Tom Malinowski (D-NJ), which was shared exclusively with Al-Monitor.

In the letter sent Monday to C​​omptroller General Gene Dodaro, the group of 12 House Democrats point to Title 22 USC Section 2756, which bars the State Department from providing arms export licenses, letters of offer or other forms of security assistance to countries that engage in a “consistent pattern of acts of intimidation or harassment directed against individuals in the United States.”

The lawmakers called on the Government Accountability Office to conduct a study of the State Department’s enforcement of the law, including its process for identifying patterns of transnational repression. They also want to know if, for purposes of enforcing the law, the FBI is sharing with the State Department evidence of countries threatening individuals in the United States and whether such behavior has ever changed the eligibility status of a foreign military sales recipient.

“If a country is engaging in a pattern of harassment or intimidation of people inside the United States, then it’s not legal to sell arms to that country,” Malinowski said in an interview with Al-Monitor. “The question is whether the US government is adequately monitoring those patterns,” he went on, adding, “I don’t have much evidence of any active enforcement.”

The lawmakers also described Turkey and Rwanda as among the countries receiving US security assistance or arms despite a pattern of intimidation or harassment inside the United States.

“This is not about human rights conditions in these countries,” Malinowski said. “The question here is whether the United States government is enforcing laws designed to protect Americans in America.”

The lawmakers list several examples of alleged transnational harassment by Egypt, including against Mohamed Soltan. The human rights campaigner is one of several critics living in the United States whose family members in Egypt have endured home raids, arbitrary arrests, forced disappearances and other reprisals at the hands of Egyptian security forces, rights groups say.

The January arrest of a New York man who prosecutors said was covertly gathering information about the Egyptian government's US-based political opponents is described in the letter as another example of Egypt's repressive reach.

The letter also details Saudi Arabia’s alleged attempts to silence dissent outside its borders, which monitoring groups say have included issuing death threats to members of the Saudi diaspora in the United States. Before his 2018 murder in Istanbul, Washington Post columnist Jamal Khashoggi was reportedly subjected to a Saudi-directed online harassment campaign. There are also reports of Saudi students in the United States being threatened for their political activities.

The lawmakers also expressed concern at reports that at least 18 US citizens or their family members were wrongfully detained or forcibly disappeared in the conservative Gulf country between 2020 and 2021.

The congressional letter comes as the Biden administration continues to face criticism from human rights organizations and some members of Congress for weapons transfers to US security partners in the Middle East. On Tuesday, Gen. Frank McKenzie, head of US Central Command, said the administration would approve the sale of F-15 aircraft to Cairo.

In their letter to Dodaro, the lawmakers requested that the Government Accountability Office determine whether the State Department is bringing up 22 USC 2756 in conversation with foreign governments as a way of discouraging acts of repression on US soil.

“I would hope the State Department is using this law as leverage to protect people in our country against that kind of intimidation and violence,” Malinowski said.