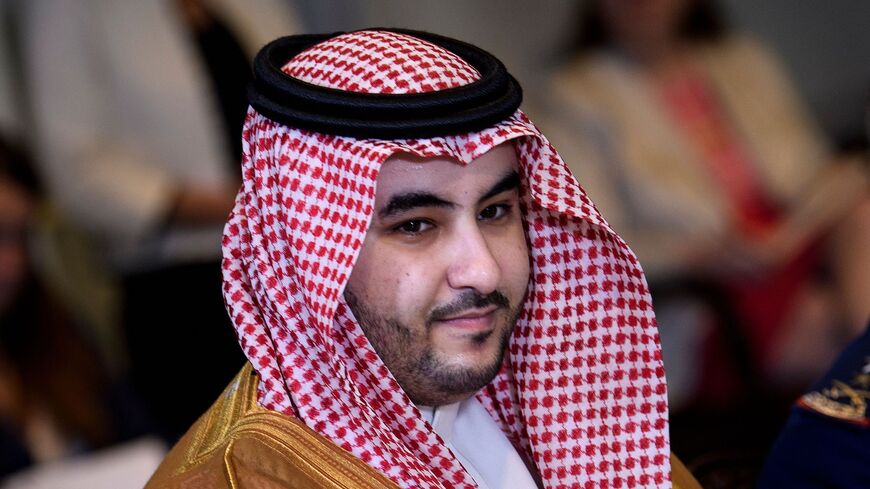 Saudi Arabia's Vice Minister of Defense Prince Khalid bin Salman waits for a meeting with US Secretary of Defense Mark Esper and others at the Pentagon on Aug. 29, 2019, in Washington, DC. - BRENDAN SMIALOWSKI/AFP via Getty Images

As Saudi Crown Prince Mohammed bin Salman’s younger brother meets with officials in Washington this week, two lawmakers are pressing the Biden administration to explain whether he was included on its list of Saudis banned from entering the United States over the targeting of journalist Jamal Khashoggi and other dissidents.

Saudi Arabia’s Deputy Defense Minister Prince Khalid bin Salman is the highest-profile Saudi to visit the nation’s capital since the Biden administration released a long-awaited intelligence report which assessed that the powerful crown prince approved the October 2018 operation that killed Khashoggi. The Saudi government maintains he was killed in a rogue operation and that the crown prince had no involvement.

“We seek to understand the rationale for Prince Khalid’s multiple visits and whether the Department of State reviewed allegations regarding his alleged role in targeting Saudi dissidents, consistent with the administration’s Khashoggi Visa Ban,” read a letter to Secretary of State Antony Blinken from Reps. Tom Malinowski (D-N.J.) and Brian Fitzpatrick (R-Penn.).

President Joe Biden pledged during his campaign to make Saudi Arabia a "pariah" over Khashoggi's murder but stopped short of punishing the crown prince himself.

As part of efforts to hold Riyadh to account, Blinken unveiled the Khashoggi Ban, a new visa policy under which 76 unnamed Saudis were hit with visa restrictions for threatening the slain journalist or other dissidents.

The congressional letter sent Wednesday, which was first obtained by Al-Monitor, asks whether the Biden administration believes Prince Khalid meets the criteria for a visa denial under the Khashoggi Ban, which permits the State Department to deny entry to individuals acting on behalf of a foreign government who “have been directly engaged in serious, extraterritorial counter-dissident activities.”

The lawmakers describe a “documented campaign of intimidation” against US-based Saudi critics during Prince Khalid’s tenure as Saudi ambassador to the United States.

The declassified DNI report on the Khashoggi killing does not include Prince Khalid among 18 Saudi officials named as complicit or responsible for the murder.

But the lawmakers' letter references Washington Post reporting that the CIA concluded Prince Khalid personally told Khashoggi to go to the Saudi consulate in Istanbul and assured him it would be safe to do so. US intelligence intercepted the phone call between the two men but did not assess whether Prince Khalid knew Khashoggi would be killed at the consulate, according to the report.

“If the United States government has any evidence that Prince Khalid did in fact play a role in the effort to kill Jamal Khashoggi and the effort by Saudi Arabia to go after people in our country, then that’s not something that should be overlooked,” Malinowski told Al-Monitor.

In their letter, Malinowski and Fitzpatrick ask whether the administration has lifted or made any exceptions to the visa restrictions imposed on the 76 Saudis.

A State Department spokesperson told Al-Monitor that "the restrictions remain in place." The spokesperson declined to say whether Prince Khalid is on the list, saying "visa records are confidential under US law."

The lawmakers also ask whether the department has acted to restrict the 76 Saudis under Section 7031(c) of the relevant appropriations act, which authorizes public visa denials for foreign officials involved in gross violations of human rights or significant corruption. Blinken said the administration would consider designations under this authority when he announced the Khashoggi Ban last year.

Malinowski, a former State Department official, called on the administration to reveal who is subject to the Khashoggi Ban.

“The only reason not to make the list public would be if we’re afraid of diplomatic repercussions with the Saudi government,” he said. “Any signaling to Saudi Arabia that we are afraid of what they might do to us weakens US leverage in all of our dealings with that country.”