Iran's supreme leader blames US for Russia war on Ukraine

Iran's supreme leader said the United States was the "root cause" of the Ukraine war as he refrained from condemning Russia for the invasion. 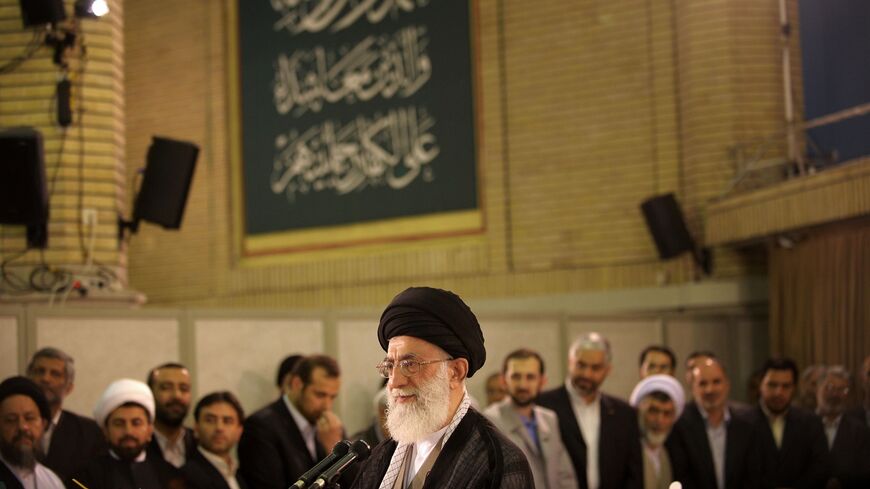 Iran's Supreme Leader Ayatollah Ali Khamenei delivers a speech after casting his vote to elect a new president at his office in Tehran on June 12, 2009. - OLIVIER LABAN-MATTEI/AFP via Getty Images

"Ukraine is a victim to America's policy of crisis instigation," declared Iran's Supreme Leader Ayatollah Ali Khamenei in a televised address, as the Russian invasion of its western neighbor entered a sixth day.

"US interference through velvet movements and color coups," Khamenei said, "pulled Ukraine into where it is now."

Despite expressing support for a "halt to the war," Khamenei avoided condemning Russia for waging it, and made no reference to Ukraine's territorial integrity. Yet he attacked the United States and the Western world as the root causes of the ongoing conflict.

"We are against wars and destruction anywhere in the world… unlike Western governments, which turn Afghan weddings into funerals with their bombardments, and brand it war on terror," the Iranian leader said.

The remarks were Khamenei's first public reaction to the war ordered by his close ally, Russian President Vladimir Putin, who is facing a growing tide of international condemnation along with packages of unprecedented far-reaching sanctions.

In a brief content analysis, London-based Iranian journalist Hossein Bastani highlighted how Khamenei made zero mention of the word "Russia," while making direct references to the United States 20 times.

Khamenei also described the government of Ukraine's President Volodymyr Zelenskyy as a "puppet state" which had fallen back on the US and Europe, and now served as a lesson that the promise of Western support is but a "mirage."

The 82-year-old cleric argued that the Ukrainian government is grappling with war because it lacks public popularity and "if its people had entered the scene, Ukraine wouldn’t have been at what it is now."

Seen waiting in long queues to serve as combat volunteers, Ukrainians have over the past week earned international admiration for putting up stiff resistance against a heavily equipped Russian army, as one opinion poll suggested President Zelenskyy's approval had hit an all-time high of 90%.

Since its outbreak, the Russia war on Ukraine has increasingly sparked heated debates in Iran and has further laid bare divisions on the nation's political spectrum.

The hardest-line loyalists of the Islamic Republic adhere to the narrative that Putin was left with no choice due to Western provocation. The Ukraine war, those Iranians argue, has vindicated their view that governments should refrain from trusting the United States. Critics of the Iranian government, on the other hand, accuse it of lacking independence, demonstrated in its reluctance to criticize the onslaught.

And the rifts have been most evident in the choice of terminology in newspaper headlines. "The resistance of the Ukrainian public and military against the invasion by Russian aggressors" was covered by the moderate daily Jomhouri Eslami.

By clear contrast, however, the ultraconservative paper Javan underlined how Putin "was flexing nuke muscles" to the face of NATO countries.