Iran refused to condemn Russia's invasion of Ukraine and instead blamed the "crisis" on "NATO provocations." 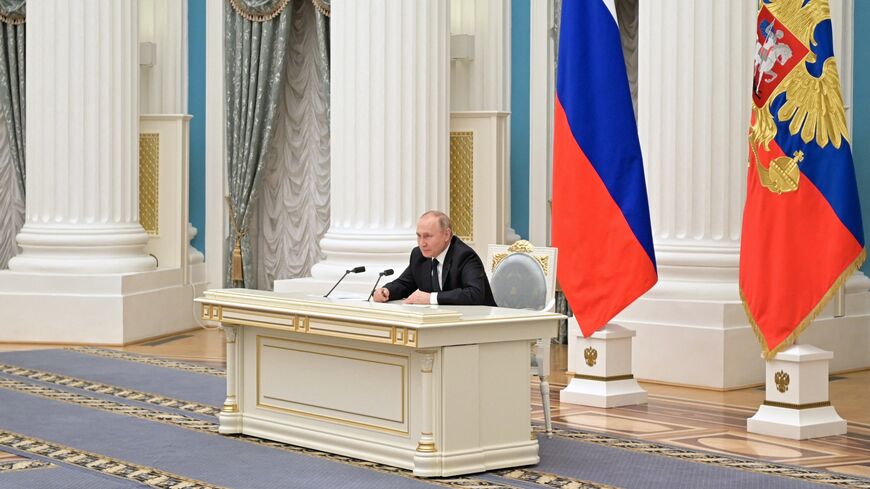 Russian President Vladimir Putin chairs a meeting of big businesses at the Kremlin in Moscow on Feb. 24, 2022. - ALEXEY NIKOLSKY/SPUTNIK/AFP via Getty Images

As Ukraine woke up to a pre-dawn invasion by the Russian military, officials in Tehran scrambled to take a diplomatic stance that would not harm their close ties with a key ally, the Kremlin.

"The Ukraine crisis is rooted in NATO's provocations," tweeted Iran's Foreign Minister Hossein Amir-Abdollahian. He urged a "cease-fire" to allow for "a political and democratic resolution." The Iranian top diplomat's message carried neither a condemnation of Russia nor even a mention of the country.

The sympathetic approach to Russia drew strong reactions from former politicians and pundits. "The state broadcaster is covering the war as if Iran is a Russia colony," wrote former deputy parliament speaker and outspoken Reformist figure Ali Motahari, who noted, "Iran ought to condemn the Russian aggression in Ukraine to demonstrate its independence," and reminded officials in Tehran of how Russians aided Iraqi dictator Saddam Hussein in his war against Iran in the 1980s.

While the air time balance tilted toward the pro-Russia narrative, Iranian state TV also aired rare heated exchanges. "We should not support the Russian action in Ukraine," said pro-reform analyst Hassan Beheshtipour. "There is no guarantee that Russia will not launch the same invasion against our country."

The line was echoed by many other Iranians as they dug into the history of World War I, when vast swaths of Iranian territory fell under Soviet boots.

Meanwhile, amid the swiftly unfolding developments, Iran's Foreign Ministry said it was prioritizing the safe evacuation of Iranian nationals, most of them students, from Ukraine. Some, however, complained on social media that the plans came too late and that despite their pleas to the Iranian Embassy in Kyiv over the past several days, they had been given little beyond advisories such as to take shelter in the event of bombardments.

The invasion of Ukraine has also brought up serious questions about the ongoing talks over the revival of the 2015 Iran nuclear deal in Vienna.

Iranian journalist Ahmad Zeidabadi told Islamic Republic officials that it would be simplistic to assume that the invasion would necessarily secure Iran's interests in the nuclear deal.

"It is not a an opportunity," he wrote on Telegram. "It could rather be a threat, jeopardizing the nuclear deal."

He argued that Putin could well sacrifice Iran's interests by using it as a bargaining chip in his standoff with the West.