Iraq has aligned with China and Iran in abstaining from a UN General Assembly resolution condemning Russia’s invasion of Ukraine. 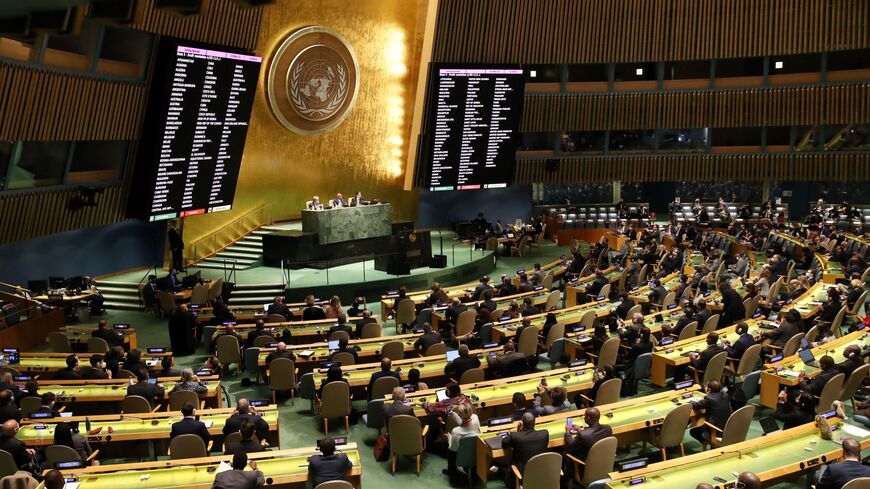 Voting takes place at the United Nations General Assembly during a special session on the violence in Ukraine on March 2, 2022 in New York City. Members voted overwhelmingly for a non-binding resolution that condemns Russia for its invasion of Ukraine. - Spencer Platt/Getty Images

BAGHDAD – As Russia continues to gain territory in Ukraine and thousands have reportedly been killed on both sides in a few days, Iraq has abstained from a UN vote demanding that the country halt its offensive and withdraw its troops.

On the streets of the Jadriya neighborhood, billboards and posters stating in English, “We Support Russia” with a photo of President Vladimir Putin briefly vied for attention with the ubiquitous posters of Shia militia fighters and commanders.

At least some of the pro-Putin posters had been removed by March 3.

Jadariya is across the Tigris River from the heavily fortified and oft-attacked Green Zone and is where some commanders of Iran-linked armed groups live. Mass protests have been held against the United States in this area in recent years.

Sabereen news — linked to Iraqi militias supported by Iran’s Islamic Revolutionary Guard Corps (IRGC) — trumpeted on social media that the pro-Russia posters had “spread through the capital in support of Putin.” The official Twitter account of the Russian Embassy in Iraq also tweeted about the posters of Putin.

Some 141 nations voted in favor of a UN General Assembly motion condemning the invasion of Ukraine on March 2. The resolution “deplores in the strongest terms the aggression by the Russian Federation against Ukraine” and demands that Russia unconditionally withdraw all its military forces from Ukraine.

Iraq abstained from the vote, as did China, India, Iran, and 31 others. UN resolutions are not legally binding.

Parts of the Iraqi political sphere have long been close to the Syrian government and Russia, as well as Iran. As Al-Monitor reported in late February, “Hours after the news broke that Russia had begun an invasion of Ukraine at dawn on Feb. 24, Iraq’s national security advisor took part in a meeting of a four-nation joint intelligence center that Western nations have long eyed warily.”

Though these meetings are held regularly, photographs were circulated afterwards of National Security Advisor Qasim al-Araji standing in front of Iranian and Russian flags next to men in military uniform.

The Quartet Information Exchange and Coordination Center comprises representatives from Russia, Iran, Syria and Iraq to coordinate intelligence against the Islamic State (IS) in the region. It was announced in late September 2015, only days before Russia officially entered the Syrian conflict.

Some Iraqis see the rejection of Russia’s actions among Western nations as a sort of conspiracy. Various other conspiracies are frequently alleged by their leaders about the US and Israel, and they often claim that the US created IS.

Araji’s Feb. 24 statement that Iraq fears “a plot for the return of terrorists and their spread in the region, which will generate a state of instability” was seen by some as potentially alluding to such a conspiracy theory.

Support for Russia in its fight against Ukraine has been voiced by many IRGC-linked Shiite armed groups known as the muqawama, or resistance, with several high-ranking figures issuing statements.

On February 27, Secretary General of Kataib Hezbollah Abu Hussein Al-Hamidawi stated, “It is in the interest of the nation and the axis of resistance that the West loses this war in order to ward off their evil from the region.”

He added, “The Russians had to make a thousand calculations before they took this step, after the Americans forced them to go with this option.”

Abbas al-Zaidi from the political office of the PMU faction Kataib Sayyid al-Shuhada told Al-Monitor that the conflict is Ukraine is “an intelligence battle par excellence," and that British and American intelligence services “will harness their experiences in Iraq, Vietnam, Afghanistan, El Salvador and its experience in forming gangs, mafias and death squads in Iraq and Honduras.”

Both the IRGC-linked militias and the Russians have for many years fought on the side of the government forces in Syria. These forces normally cross into Syria south of the Iraqi border city of Qaim.

US-backed Kurdish-led Syrian Democratic Forces have long had relatively good relations with Russia and the Syrian government, which seem to be getting closer in recent months.

The Arab forces mostly from eastern Syria at the Tanf base further south, known as Maghawir al-Thawra (MaT), do not. The two forces are both backed by the international coalition but do not collaborate.

Syria has long been seen by some as serving as a sort of testing ground for Russian weapons and tactics, including as concerns information warfare.

Russian Defense Minister Sergei Shoigu boasted in early 2017, roughly a year and half after Russia officially entered the conflict on the side of the Syrian government, "We tested 162 types of contemporary and modernized weapons in Syria, which showed a high level of effectiveness.” Shortly after Russia entered the conflict, it fired cruise missiles at targets in Syria some 900 miles away.

Some of the tactics Russia has used in Syria have been reported in Ukraine, such as the March 1 shelling of the Zaporizhzhia hospital in the southeastern part of the country. Russia and the Syrian government have often targeted schools, medical facilities and markets in Syria during the conflict there, which started in 2011.