Pressured by the West, Foreign Minister Yair Lapid has issued a first public condemnation of Russia's invasion of Ukraine. 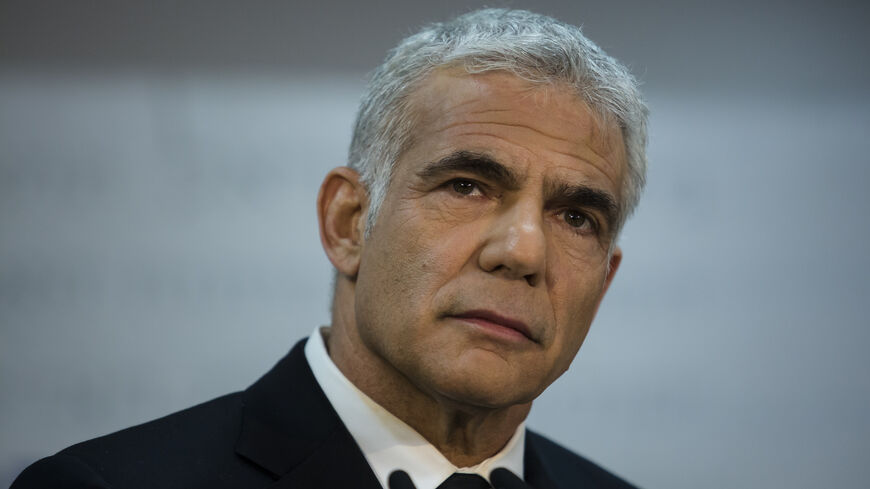 Foreign Minister Yair Lapid undertook the thankless task of condemning the Russian invasion of Ukraine this week. A day earlier, on Feb. 22, Israel issued an anemic announcement supporting Ukraine’s “territorial integrity” without mentioning Russia. The United States and the West were not satisfied and the Russians were irritated. At about the same time, Russia’s UN ambassador announced that his country condemns Israel’s occupation of the Golan Heights.

This reference to Israel’s Golan takeover from Syria 55 years ago signaled officials in Jerusalem that the time had come to get off the fence. Israel’s heart is in the democratic Western camp, but Russian President Vladimir Putin is on the Syrian side of its Golan Heights border fence. Lapid even calls the Russians “our northern neighbors.” The Russian radars deployed in Syria lock on Israeli fighter jets every time they take off, even from Israel’s southernmost air bases. This week, Israel reportedly launched two raids on Syria, bombing Iranian-backed targets on the Syrian Golan and another equally destructive bombing run in the Damascus region.

Israel’s feeble response to the Russian aggression prompted significant criticism in the West. Lapid was subjected to biting comments from European colleagues over Israel’s neutrality. Prime Minister Naftali Bennett summoned Lapid and Defense Minister Benny Gantz, with Soviet-born Finance Minister Avigdor Liberman joining remotely, for an urgent discussion. Their decision was to adopt a tougher tone, doing the minimum required to meet the bar set by the West but avoid crossing the red line drawn in the East. Having the bad luck to be Israel’s foreign minister, Lapid was saddled with the mission.

Lapid said without much enthusiasm, refusing to answer reporters’ questions, “The Russian attack on Ukraine is a serious violation of the international order. Israel condemns that attack and is ready and prepared to offer humanitarian assistance to Ukrainian citizens.”

Quickly, Yair Netanyahu, son of former Israeli Prime Minister Benjamin Netanyahu, popped up on Twitter with a Russian-language broadside claiming, “Yair Lapid does not represent most Israeli citizens.” Two hours later, Bennett addressed the graduation ceremony of an officers’ training course in the Negev. On live TV, Bennett expressed condolences over the Ukrainians’ suffering but failed to mention Russia.

According to reports reaching Jerusalem, the Russians took Bennett’s statement relatively well and hinted that beyond its criticism at the UN of Israel’s Golan occupation (which has always been Moscow's position), Moscow would handle Israel’s criticism. But with the Russian invasion of Kyiv, Israel will likely have to take a firmer stand soon.

Lapid spoke on the phone Feb. 24 with US Secretary of State Antony Blinken. The United States will likely demand assurances that Israel will vote in favor of a harsh UN denunciation of Moscow. Will Israel do nothing, as did following the 2014 Russian invasion of the Crimean Peninsula​? Israel simply abstained from that UN vote, with the official excuse being a general strike by its Foreign Ministry staff.

Israel must position itself within the American camp, but the question is how strongly. The cooperation between the Israeli air force and Russian forces in Syria is a unique strategic asset for Israel. The mechanism designed to avoid friction between the two sides, including accidental clashes, was put in place under Netanyahu, linking the IDF with a Russian situation room and has been operating smoothly. Following the October 2021 meeting between Putin and Bennett in Sochi, Israel reportedly began striking Iranian-linked targets in Syria with a heavy Russian military presence, such as the Mediterranean port city of Latakia. Amid the Iran nuclear deal negotiations in Vienna, Israel cannot afford to give up access to Iranian targets on its northern border and must keep Putin happy.

There is also a moral dimension to the conflict. On one hand, most Israelis know Putin is the aggressor and regard Russia’s behavior as brutal. That a European state that did nothing to provoke a fight has fallen prey to a regional predator without anyone coming to its defense is a source of anxiety for many Israelis. The Russian assault on Ukraine awakens existential anxiety for some, who fear the Jews have no one to trust but themselves.

The flip side to this picture is that Putin is a fairly popular figure in Israel. On tattered billboards still towering over some Tel Aviv streets from the four 2019-2021 election cycles, a smiling Putin still shakes Netanyahu’s hand. For many Israelis, Putin represents the Red Army that crushed the Nazis in World War II, while the Ukrainians stir memories of murderous anti-Semitism and Nazi collaboration. Between 800,000 and 1.2 million Jews were slaughtered in Ukraine by the Nazis and their local collaborators, some of them their Ukrainian neighbors. This horror is hard to erase from Israel’s collective memory.

The Vienna negotiations with Iran are yet another element of Israel's dilemma. Western analysts have identified a dramatic shift Iranian shift in recent weeks, from dragging feet and wasting time to accelerated negotiations. According to these assessments, the Iranians are concerned that a Western defeat over Ukraine would force US President Joe Biden to adopt a tougher line on another front: the talks with Iran. “Biden cannot afford to kneel in front of two dictators in the same month,” a senior Israeli political source told Al-Monitor on condition of anonymity. “The Iranians have realized that unless they sign now, everything could be turned on its head later.”

Israeli officials surmise that Israel will have no choice but to join a UN condemnation of Russia when asked to do so. “If we get there, we will consider it,” a senior Israeli diplomatic source in Jerusalem told Al-Monitor on condition of anonymity. Asked whether clarifications had been conveyed to Moscow following Lapid’s condemnation this week, the source said, “No. That would be a display of weakness. We know the Russians. Displays of weakness do not go down well with Moscow. Demonstrations of power do. The Russians fully understand our situation. We will do what serves Israeli interests, but we will not forget our place in history and the principles of morality and justice.”