What to expect now that Libya’s prime minister ousted

Libya’s controversial prime minister has been removed, but forcing his ouster could prove costly for the country. 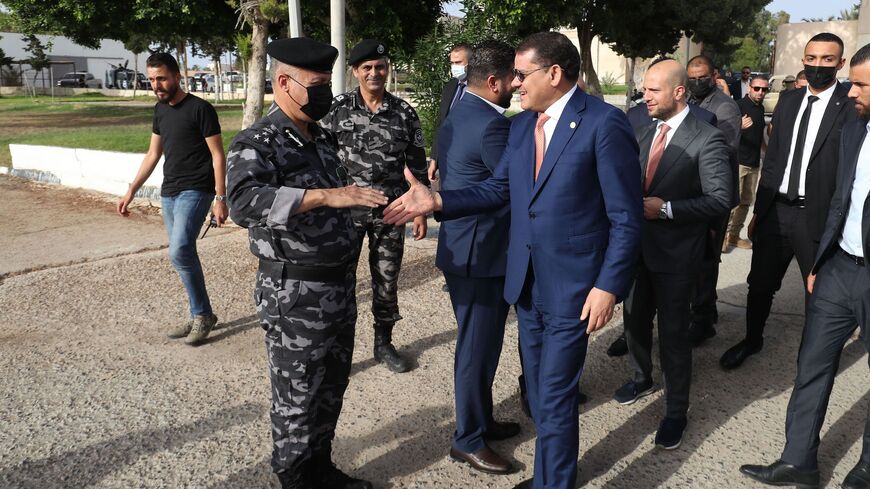 Libyan Prime Minister Abdul Hamid Dbeibeh is out of office but much of what will happen depends on his next move.

A few days ago the questions were whether Dbeibeh could hang on to power a little longer and what could happen if he is forced out. Now the House of Representatives (HoR) has had its way and replaced him with his fellow Misratan Fathis Bashaga, a former interior minister and sworn enemy of many lawmakers including speaker Aqila Saleh. It was clear that the HoR was heading toward removing Dbeibeh, deciding in a Feb. 7 session to replace the premier after less than a year in office. Bashaga now has two weeks to form a government.

Dbeibeh has been a divisive figure since he was elected prime minister last March in a UN-sponsored Libyan Political Dialogue Forum meeting in Geneva, Switzerland. Right after, some members of the 74-LPDF accused Dbeibeh of bribing other members to gain their support.

In November 2020, in the earlier days of the LPDF's working sessions in Tunisia, some 60 members wrote to the UN secretary general asking him to urgently investigate the bribery claims. The UN's acting envoy to Libya, Stephanie Williams, acknowledged receiving the request and confirmed that it had been referred to the UN Libya Sanctions Committee.

The UN body conducted an investigation but nothing came of it and Dbeibeh took over as prime minister after winning parliamentary backing in an overwhelming vote of confidence on March 10, 2021. However; in September, the HoR withdrew its support but kept the Government of National Unity as a caretaker administration until the elections planned for Dec. 24 last year, in which Dbeibeh himself was a candidate despite having signed a pledge not to run. That vote never happened and a defiant Dbeibeh rejected the legislature’s decision, calling for the dismissal of the HoR itself. In a pre-emptive move, Dbeibeh said in a televised Feb. 8 speech that the “GNU will continue to work” until the next elections.

Defying the parliament was not the first time Dbeibeh has survived a close call. All along, he has been saved by a combination of good luck and the inaction of the authorities to act on accusations of forgery and corruption. This time, it looks as if his luck may have run out at last.

The UN sanctions body failed, for example, to act on the bribery allegations and did not even publish its findings, which might have helped Libya’s judiciary launch its own investigation. Lack of information and witness testimonies was another reason Libya’s prosecutor general did not fully investigate the serious claims.

Almost all the LPDF members who had complained about the bribery issue to the UN failed to submit their complaints to the prosecution so it could open its own investigation. Out of the 60 or so LPDF members who first raised the issue, only Zahra Langhi submitted her written claims to the judicial authority. It was not enough to force an investigation and the issue was put aside. In a tweet today after Dbeibeh was deposed, Langhi blamed the UN for allowing him to become prime minister in the first place by not investigating the bribery allegations.

Despite everything that has happened, Dbeibeh has continued as prime minister. Since late December, four of his ministers have been jailed, accused of corruption, mismanagement and wasteful spending of public funds.

The latest was Health Minister Ali Al-Zanati and his deputy Samir Koko. They are accused of buying oxygen-supplementing devices for COVID-19 patients at a 1,000% markup. They are also accused of buying Russian vaccines at at least “twice the advertised price,” according to an anonymous source who spoke to Libya’s anti-corruption organization, a nongovernmental body.

Dbeibeh is also accused of forging his own university degree and nothing has been done about that, either.

Benghazi lawyer Ahmed Saleem told Al-Monitor that such accusations should “force any decent politician to immediately resign,” but not in Libya, where “decent politics is unheard of.”

To Saleem, the prime minister's luck seems to be holding, as “removing him carries the potential to disrupt” the entire political process, mediated by the UN’s special adviser on Libya, Stephanie Williams. It also has the potential to recreate the 2014 scenario in which Libya had two parallel governments: one in Tripoli recognized by the UN, and another one in Al-Bayda recognized by no other state.

However unlikely, there is a possibility that removing Dbeibeh might ignite another war, ending the cease-fire that has been holding since Oct. 23, 2020. Libya’s military commission, known as the 5+5 Commission, made of an equal number of military officers representing both east and west regions of the country, has been meeting regularly to maintain the cease-fire across the country. The commission is also charged with arranging for all foreign mercenaries, currently in Libya, to leave the country. It has been the only real success so far in the decade-long conflict.

But the political landscape is different now. Libya's political divisions are not as severe as they were in “2019, when the war over Tripoli was going on,” Milad Said, an economics lecturer at Bani Walid University, southwest of Tripoli, told Al-Monitor. On top of that, Said pointed out, "Calls for Dbeibeh to go are coming from all over Libya,” unlike previous political quarrels that were “conducted along regional lines,” Said concluded.

Many, though, think that the HoR has its own hidden agenda in calling for the removal of the prime minister. The legislature is not being “honest and particularly speaker Saleh,” according to Benghazi lawyer Fatima Hussein, who told Al-Monitor the HoR is making Dbeibeh a “scapegoat” to further delay proposed elections.

The HoR came up with its own road map calling for elections to take place no later than 14 months from now, going against the LPDF's adopted road map that envisions polling to take place by June this year after they were suspended last December.

Saleh and many others are using the controversy surrounding Dbeibeh to discredit Williams by accusing her of interfering in Libya’s internal affairs. After a Feb. 1 session, the HoR issued a statement calling on the Foreign Ministry to take the necessary “diplomatic” steps to inform “the Secretary-General of the United Nations to stop foreign interference in Libyan affairs.” Hussein thinks that indeed Williams is not mentioned by name but she is the “target here and the goal is to disrupt” her work.

There is no evidence that Williams supported corrupt officials like the prime minister to stay in power, but every comment she makes is immediately interpreted as support for the GNU despite its dismal record. In fact, she warns that the new government could further divide the country and does not offer any guarantees that elections will be held on time or that it would government hand over power.

In an interview with The Guardian, Williams pointed out that her fears are shared by many Libyans who have been angered by the suspended elections. Over 3.5 million Libyans registered to vote in the now delayed polls.

To Salem Belgasem, a political science professor at the University of Benghazi, Dbeibeh's fate is not the issue. What is at stake, he says, is that “Libyans must not be given the chance to vote anytime soon.”

He explained to Al-Monitor that neither the HoR nor the Higher Council of State consultative body want to leave the political scene yet. In a rare deal, the bodies have agreed on new road map and “elections within 14 months,” which is really like saying, “No elections in the foreseeable future,” Belgasem concluded.

Now that he has left office, much depends on what Dbeibeh and his supporters will do. There is only one certainty amid the drama: There will be no elections in Libya this year.