Before even taking office, Libya’s interim government could soon be hit with a bribery scandal as the UN experts panel prepares to publish its findings. 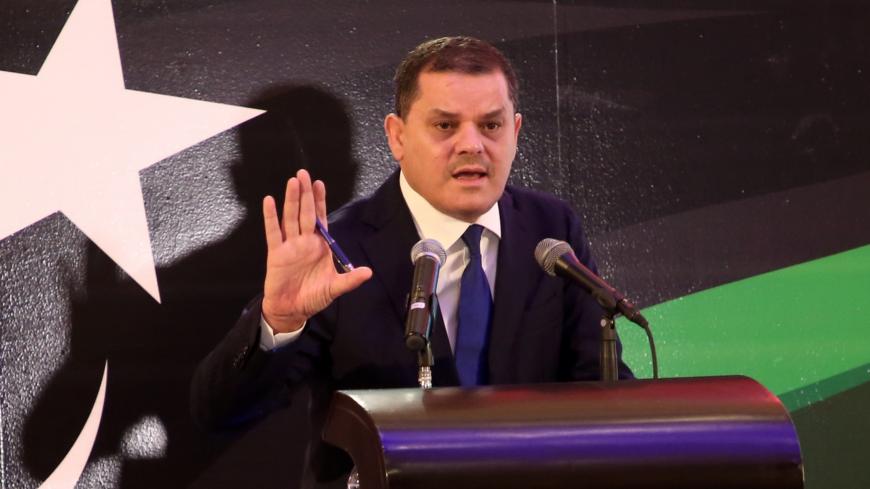 In a Feb. 25 press conference, Libya’s newly designated Prime Minister Abdul Hamid Dbeibah failed to name his Cabinet members as expected. Instead, he said he has submitted his criteria for selecting the individual ministers to the House of Representatives to get its approval. He might follow this strategy to avoid any controversy releasing the names before he presents his draft of the Government of National Unity to parliament for a vote of confidence.

Forming a unity government in a divided Libya is a challenge. Dbeibah said his team “received 3,000 nominations” for ministerial jobs — an average of 100 nominees for each portfolio in a Cabinet of 30 ministries.

Dbeibah, however, was not elected by popular vote. He was elected by a 75-member group known as the Libyan Political Dialogue Forum. The forum itself was handpicked by the United Nations Support Mission in Libya.

Even before taking office, Dbeibah is already facing a serious challenge as reports of vote buying involving the forum gain more traction.

A UN panel of experts on Libya is expected to name three forum members who sold their votes to Dbeibah. The bribery scandal emerged Nov. 23 when the then head of the UN mission, Stephanie Williams, made her opening remarks of the forum session.

Al-Monitor spoke with a Tripoli-based forum member, who wishes to remain anonymous, who confirmed that money was paid and that he personally spoke with Williams about it.

Another Europe-based forum member, speaking anonymously, told Al-Monitor, “I know one [forum] member who received $150,000” in return for voting for Dbeibah.

A third forum member, based in Cairo, who also wants to remain anonymous, told Al-Monitor that three forum members “were paid between $120,000 and $150,000.” But he denied that Dbeibah made the payments himself, saying someone “from his extended family” did.

Zahra Langhi, a prominent forum member from Benghazi, confirmed the alleged bribes during an Al-Hadath TV interview Feb. 28. Langhi was one of 56 forum members who on Nov. 19 signed an open letter to UN chief Antonio Guterres urging him to take action. The issue of bribery has tainted the forum and the incoming Government of National Unity since it involves the prime minister-designate himself, casting a shadow on the parliament’s session for a vote of confidence on the new government.

The divided Libyan parliament ended its first session today, March 8, in Sirte, east of Tripoli, without voting on the new Government of National Unity. Legislators will resume debate tomorrow, but it is doubtful that a vote will take place. In any case, The Libyan Political Dialogue Forum roadmap gives lawmakers 21 days starting today to either pass or reject the government. If it fails to approve it then, the roadmap dictates the issue be decided by the forum.

Parliament member Aguila Saleh lost the forum elections in February so he is bent on “undermining the process,” said his former political ally, parliament member Abobaker Baera, in a TV interview.

There are many questions on whether the bribery scandal could derail the entire process, thus annulling everything the forum managed to achieve. Such a possibility will affect Dbeibah and the entire Presidential Council elected with him Feb. 5 in Geneva.

Langhi proposed earlier elections as a way out of the mess, while warning that any cover-up will have serious consequences.

The Tripoli-based source does not agree. He said the House of Representatives’ vote of confidence on the new government is “a minor procedural issue” since the forum has the last word. Indeed, paragraph three of Article 4 of the road map adopted by the forum states that if parliament fails to approve the government formation, the matter shall be decided by the forum. Since Libya is still without a constitution, the forum unanimously approved the road map as a tailored interim constitution specific for the interim Government of National Unity. The document will become void when elections take place in December.

Another thorny issue is that the majority of Dbeibah’s list won in the Feb. 5 vote. He and his joint list for Presidential Council got 39 votes — five more than the second runner-up list, which included Saleh. Such a slim majority could be further eroded if the upcoming UN report implicates three individuals for accepting cash to vote for Dbeibah. Such development could mean the losers’ list is likely to ask for a second vote. However, the Cairo-based source thinks this won’t happen as the forum has the power to “decide how to proceed” he said, citing the road map.

All three sources, however, do not offer any alternative to get out of this potentially explosive legal issue. They, however, referred again to the road map that gives the forum “the chance to meet and decide” on what to do.

Should Dbeibah’s Government of National Unity survive all this and win the House of Representatives’ confidence, the question would be on whether it could deliver what is expected of it in less than eight months; assuming it will take office early next month.

Priorities set by the forum’s road map are complicated, require time and are hard to tackle. The most difficult challenges are the armed militias, security concerns and the presence of foreign forces in the country. Russian mercenaries, supporting Khalifa Hifter and his Libyan National Army, are still entrenched in and around the Sirte-Jufra frontline. Syrian mercenaries, supporting the Government of National Accord, meanwhile, remain in and around Tripoli. Neither the Government of National Accord nor the Libyan National Army have announced a deadline for the withdrawal of their foreign supporters.

The deadline for their departure, set by the Oct. 23 cease-fire agreement, has already passed. The Government of National Accord-Libyan National Army joint 5+5 military commission agreed that all foreigners should have left Libya by Jan. 23, 2021.

Ali al-Saeedi, a member of parliament from the southern region, does not think disarmament and departure of foreign fighters are achievable objectives before the Dec. 24 elections. He told Al-Monitor, “Another way has to be found” to organize elections without any “interference from either [party].”

One such way is suggested by Ibrahim Fituri, a law professor at Benghazi University. He said both militias and foreign fighters could be “ordered not to leave their barracks” during the election period. By keeping them confined to certain places, Fituri believes this will “offer a certain degree of security.” However, as unrealistic as that is, it seems a plausible idea in a country where arms are abundant.

While the country’s election commission repeatedly said it is ready for elections and has the needed resources to run successful polls across Libya, it cannot do much without strong government support.

Another top priority for the Government of National Unity, should it assume power, is launching national reconciliation to heal the wounds of the last decade. Libyans have never been as divided along tribal and regional lines as they are now.

The Libyan National Army’s offensive against Tripoli divided families, displaced hundreds of people, and destroyed hundreds of homes in the southern part of the region. The largest displaced community comes from Tarhouna, some 75 kilometers (47 miles) south of Tripoli. Out of an estimated population of 80,000 people, perhaps half of them are displaced.

Tarhouna is also the site of dozens of mass graves of people who opposed the al-Kani militia, which controlled the city before it was driven out in June 2020. The militia initially allied itself with the Government of National Accord before switching to fight alongside the Libyan National Army in 2019.

The Government of National Unity will also face an angry and dissatisfied public due to daily problems such as power cuts, lack of money in the banks, explosive prices and the COVID-19 pandemic. Libya has yet to receive a single shot of vaccine.

Uniting the divided state institutions is another hurdle facing the Government of National Unity. The country has been under two governments since the 2014 elections. While the Government of National Accord is recognized by the UN as the only government, the rival government in al-Bayda in the east does control large swaths of the country, particularly in the eastern and southern regions. Bringing these two governments under one prime minister is an “immensely difficult job,” said Saeedi.

Fituri suggests what he describes as a “simple magical idea,” by keeping the government ministries in al-Bayda as “branches for ministries in Tripoli.” He cites the fact that Libya under Col. Moammar Gadhafi had a similar arrangement.

Unity, security, fighting the pandemic and organizing elections in a few months are indeed “formidable challenges but we have no alternative,” Saeedi said.