The continued closure of the land crossings between Egypt and Sudan has prompted rumors that Egypt is exploiting Sudan’s resources and standing in the way of the civilian-led movement. 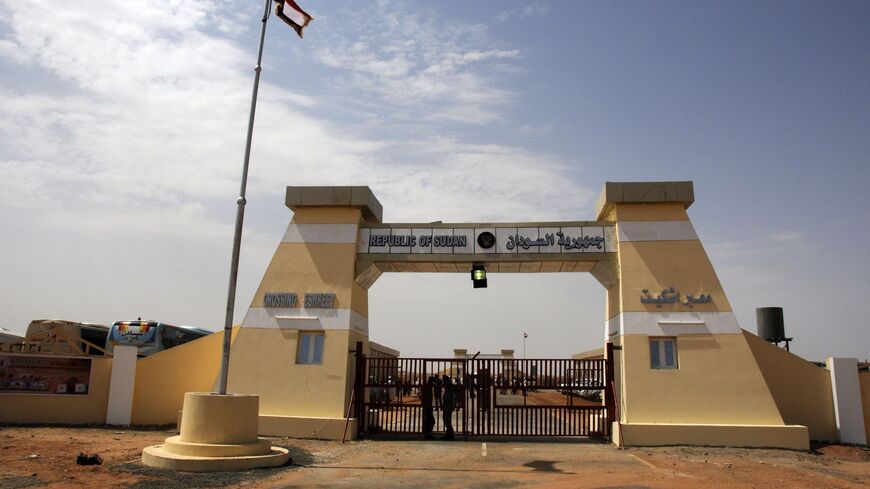 This picture of the newly opened Eshkeet-Qastal land crossing between Sudan and Egypt was taken on Aug. 27, 2014. - AFP via Getty Images

CAIRO — Ever since the Sudanese revolution that toppled the Omar al-Bashir regime in April 2019, rumors have circulated about Egypt’s role in Sudan.

More recently, the spread of popular protests to northern Sudan increased tensions with the Egyptian regime. The closure of the land crossings between Egypt and Sudan has prompted rumors that Egypt is exploiting Sudan’s resources and standing in the way of the civilian-led movement.

Since mid-January, Sudanese protesters from Sudan’s Northern State have blocked Sheryan al-Shimal, the road connecting Egypt to Sudan, to pressure the central government in Khartoum to back down on its decisions to raise electricity prices and increase the state’s shares of the country’s natural resources.

The closure of the key road completely paralyzed trade movement between Egypt and Sudan as hundreds of trucks transporting Egyptian and Sudanese goods were forced to wait across the border.

Egypt’s ambassador to Khartoum, Hossam Issa, denounced the rumors in a Jan. 23 press statement. He accused unnamed parties of circulating rumors that Egyptian security forces had stopped issuing entry visas to the Sudanese. He added, “I hope in the future that entry visas between the two countries will be abolished."

Issa denied the accusations and stressed that the Sudanese are still welcome to Egypt.

Meanwhile, social media users in Sudan circulated statements attributed to the Egyptian defense minister that Egypt will not remain patient over the road closure that has disrupted the movement of Sudanese products to Egypt.

An Egyptian diplomatic official with knowledge of Sudanese affairs told Al-Monitor on condition of anonymity, “There are consultations with the Sudanese Sovereignty Council and the concerned authorities in Sudan to solve the problems caused by the closure of the land route between the two countries, which halted trade movement and incurred daily losses to both sides.”

The official stressed, “The Sudanese issue tops the strategic agenda of the Egyptian administration. There are many parties, be they internal or regional, seeking to sabotage the relations between the two countries, as consensus and coordination between Egypt and Sudan is not in their favor.”

“We are monitoring and tracing the sources behind such rumors aiming to harm the strategic interests between the two countries. The Egyptian diplomatic mission in Sudan is deploying great efforts to clarify the facts,” the official explained.

Egypt has offered various forms of economic and security support to the country since the outbreak of the December 2019 revolution and after the Bashir regime was deposed.

In December 2020, Egypt announced an agreement allowing Sudanese exports and imports to transit through Egyptian ports. The agreement came in response to the closure of Port Sudan in light of the protests led by the Beja tribes in eastern Sudan and the worsening of the wheat, medicine and fuel shortages.

According to the latest statistics from the Central Agency for Public Mobilization and Statistics in Egypt, the trade exchange with Sudan amounted to $290 million, which is still weak compared to the European Union and other Arab countries, as the volume of Egyptian exports to Sudan stands at $496 million, and the volume of Sudanese exports to Egypt at $215 million. All Egyptian exports during 2021 amounted to $31 billion.

Khartoum-based researcher and economic analyst Adel Abdel Aziz al-Faki told Al-Monitor, “There are some political parties in Sudan that are deliberately pushing to keep the crossing closed in a bid to harm Egyptian-Sudanese relations by spreading false information regarding Egypt benefitting from Sudan’s resources. Such moves may be intended to pressure the military transitional authority in Sudan,” which is believed to be backed by Egypt.

“The volume of Egyptian trade with Sudan compared to the countries of the world is very small, but Sudan imports from Egypt important commodities such as building materials, flour, cooking oils, fruits and vegetables,” Faki said. “Sudanese exports to Egypt, with the exception of meat, are raw materials due to industrial weaknesses in Sudan, the shortage of electric power that fuels factories and the lack of modern industrial technologies.”

He explained, “As a result of the closure of the Sudanese crossings with Egypt, Egyptian meat importers resorted to Djibouti and Somalia through the ports and quarries of Hurghada, Safaga and Suez, raising concerns over Sudan losing the Egyptian market and incurring heavy economic losses, especially farmers and livestock breeders.”

Some civilian forces in Sudan are voicing concerns over Egyptian support for the Sudanese military, with tensions between civilians and the military following the Oct. 25 coup that overthrew the transitional government. Observers of Egyptian-Sudanese relations believe that this Egyptian support is the main reason behind the spread of rumors and accusations against Egypt.

At the diplomatic level, Cairo has yet to make official comments on the political developments in Sudan since the coup. It has also refrained from showing support for any of the parties to the crisis, be they civilian or military, calling for restraint and national consensus.

Sudanese journalist Somaya Sayed told Al-Monitor, “The continued closure of the land crossings with Egypt has turned into a political problem. There are those who believe that the Egyptian government supports the military component and that the closure of roads with Egypt may be intended to create pressure to impede such relations. But the crisis in Sudan is mainly domestic and its solution will only come from within Sudan, despite all the foreign interference.”

“There are countries and foreign parties that have an interest in creating tension between Egypt and Sudan, but the peoples of the two countries have overcome several episodes of tension over the past years under different ruling administrations,” she said.

Sayed called for calm in the Sudanese media before relations between the two countries are harmed further. Although tensions regularly emerge between the two sides, Egypt views its relations with Sudan as vital to its interests and strives to treat them with great caution.

She said, “The damage caused by the closure of the land crossings with Egypt, including the disruption to trade movement, is a wake-up call for the Sudanese administration to enhance Sudanese industry and stop the export of Sudanese raw materials such as oil, grains and livestock. This is because the crisis is fundamentally a Sudanese problem that has nothing to do with Egypt’s exploitation of Sudanese resources. The successive Sudanese governments have failed to develop policies or infrastructure to support transformational industries.”