The resistance committees in Sudan’s Northern State are keeping the road connecting Sudan to Egypt closed, which raised questions on the decision’s impact on the Egyptian economy and whether there are political motives behind the escalation. 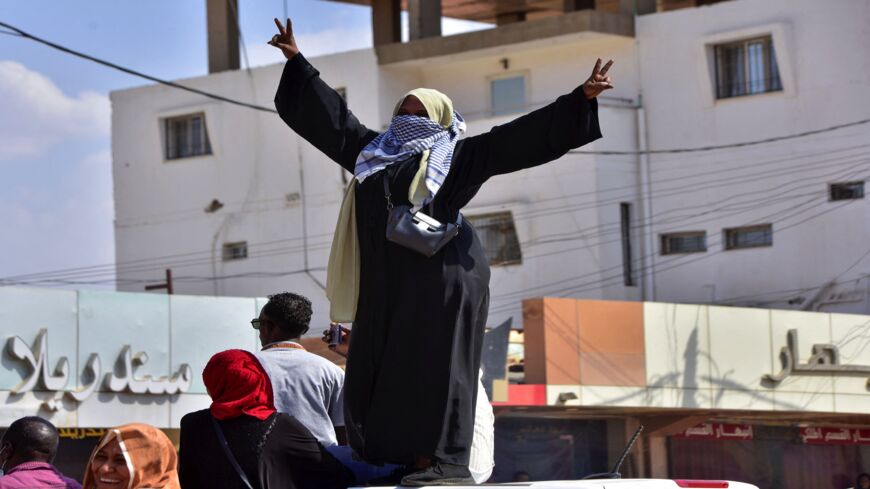 A Sudanese woman takes part in a protest in the city of Khartoum Bahri, the northern twin city of the capital, to demand the government's transition to civilian rule, on Oct. 21, 2021. - AFP via Getty Images

CAIRO — On Jan. 21, the resistance committees leading the protests that ousted former dictator Omar al-Bashir in Sudan’s Northern State announced that Sheryan al-Shimal, the road connecting Egypt to Sudan, would remain closed until their demands are met.

The road had been closed since Jan. 10 when residents and farmers in the north staged a sit-in in the areas and closed the road in protest against power bill increases, paralyzing the movement of goods between Egypt and Sudan with hundreds of trucks forced to queue across the border.

The protesters said they would keep the road closed until a decision is made to decrease the bills.

Although the Sudanese Sovereignty Council backed down on the decision to increase power bills on Jan. 12, the protesters continued their sit-in and escalated their demands. Now they want the military to hand over power to civilians and are calling for the establishment of full civilian rule without any partnership with the military; they are requesting a share of the mining revenues and want development projects in the region completed.

On Jan. 20, Haitham Sayed Ahmed, a member of the presidential council of the so-called Higher Council of the Northern States, told the press that the northern states have the right to self-autonomy, which would give them (local forces) broad powers to run the region and manage and benefit from its resources — including border trade — and its strategic geographic location.

These developments raised questions on the road closure's impact on the Egyptian economy, which already faces major challenges. Is the move politically motivated? Or is it merely aimed at achieving the protesters’ demands?

Yousif Siraj, a Sudanese political analyst, told Al-Monitor that this escalation has embarrassed the Transitional Military Council because the road closure directly affects trade relations with Egypt and consequently the Egyptian economy. He noted that the military council will be forced to negotiate with the people in the Northern State in a bid to ease the situation and resume trade exchange between the two countries.

Commenting on the road closure and halt of the flow of goods between Egypt and Sudan, Siraj indicated that the people in the north are using the Egyptian card to pressure the Sudanese Sovereignty Council to meet their demands. “Northern Sudan, including the Northern and Upper Nile states, suffers from difficult economic conditions and feels oppressed and marginalized, especially after the signing of the Juba Peace Agreement under which the armed groups from Darfur and South Kordofan received a share of power and wealth while the people in the north did not achieve any gains.”

Commenting on the demands for self-autonomy, Siraj said autonomy for the north would only happen if autonomy was adopted in other states. He expected several developments to occur in the coming period in light of the ongoing escalation and wave of protests taking place against the military’s recent decisions in the country.

On Oct. 25, 2021, Sudan's military chief Abdel Fattah al-Burhan announced the dissolution of the Transitional Sovereignty Council and the government, led by Abdalla Hamdok. A military force arrested Hamdok before releasing him under popular and international pressure.

Samir Ghattas, head of the Middle East Forum for Strategic Studies, told Al-Monitor that Sudan has become a fertile environment for international agendas and interests in light of the overwhelming chaos in the country. Hence, he added, the people in the north of Sudan could be used to put pressure on Egypt in an attempt to sow discord and drive a wedge between the two countries, especially in light of the recent Egyptian-Sudanese rapprochement on the security and economic levels and the relentless Egyptian efforts to maintain its strategic alliance in Sudan in the face of their common challenges, mainly the Grand Ethiopian Renaissance Dam (GERD) crisis.

Speaking to Burhan by phone on Jan. 2, President Abdel Fattah al-Sisi expressed Egypt's full support for Sudan in all fields based on the fact that the two countries’ national security are closely connected.

The commercial adviser at the Egyptian Embassy in Khartoum, Tariq Qashua, said in a press statement on Jan. 18 that Egypt seeks to increase the trade volume between the two countries to reach between $1 billion and $3 billion.

Meanwhile, negotiations over the GERD between Egypt, Sudan and Ethiopia have yet to resume despite Egypt’s ongoing calls. Most recently, Egyptian Foreign Minister Sameh Shoukry on Jan. 23 called on talks to resume. He said at the opening of the new headquarters of the Egyptian Community Club in the Sultanate of Oman that Egypt is ready to resume negotiations on the GERD in a bid to reach a binding and legal agreement.

Ghattas said that the escalation of protests in Sudan and extension to the north are very dangerous and pose a direct threat to Egyptian national security. This chaos could be exploited for the smuggling of terrorist elements or weapons to cause chaos inside Sudan, he added.

He expects the situation to escalate in Sudan in the coming period, which will negatively affect Egypt.