Egypt kicked off a series of dialogues with political forces in Sudan to help overcome the Sudanese crisis that erupted due to the military coup that toppled the civilian-led government in October. 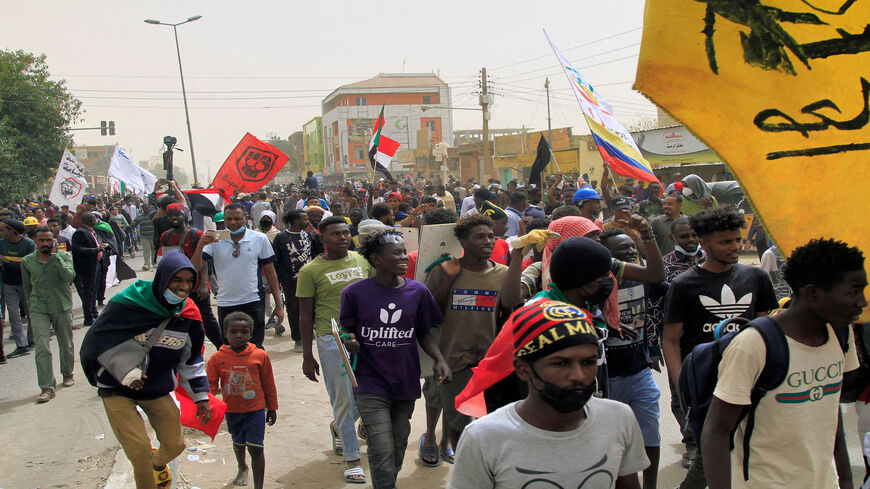 Demonstrators march with flags of Sudan and Venezuela (without the stars) during ongoing protests calling for civilian rule and denouncing the military administration, in the Sahafa neighborhood, Khartoum, Sudan, Feb. 20, 2022. - Ebrahim Hamid/AFP via Getty Images

Egypt has kicked off a series of meetings with Sudanese political forces in a bid to help weather the political crisis that has been facing Sudan, where a military coup has dissolved civilian rule.

This came a few weeks after Egyptian President Abdel Fattah al-Sisi called Jan. 13 the Sudanese parties to start a dialogue to agree on a road map that would facilitate the democratic transition process in Sudan and hold elections that would allow the people to ultimately choose their leadership.

A high-level Egyptian delegation met with a number of leaders of Sudanese political parties during an unannounced visit in mid-February to the Sudanese capital Khartoum.

Al-Sudani local newspaper reported that the Egyptian delegation included senior officials from the Ministry of Foreign Affairs and the General Intelligence Service. However, Egypt did not announce the visit or comment on the nature of the delegation and the duration of its visit.

The Sudanese National Umma Party announced that its leader, Mubarak al-Fadil al-Mahdi, received the Egyptian delegation in Khartoum to discuss ways to solve the political crisis in the country.

The meeting also touched on the current efforts to overcome the crisis “in order to achieve the aspirations of the Sudanese people toward democracy, peace, development and stability,” according to a statement issued by the party after the meeting Feb. 13.

Mahdi also discussed with the Egyptian delegation the current challenges facing Sudan and his party's vision to overcome the crisis.

The Egyptian delegation also met Feb. 16 with a number of leaders of the Popular Congress Party headed by its Deputy Secretary-General Mohamed Badr el-Din.

According to a statement issued by the party, the Egyptian delegation was also briefed on the party’s vision of the current crisis and ways to complete the transitional period in Sudan.

The statement continued that the two sides stressed the need to preserve the sovereignty of Sudan as well as the importance of reaching national solutions to Sudanese issues. The Egyptian delegation also stressed that the Egyptian government and people are keen on preserving the security and stability of Sudan.

Sudanese political analyst Othman Mirghani told Al-Monitor that the members of the Egyptian delegation in Sudan, which included security officials, “may have been a reason why the visit was kept secret and unannounced [by Egypt].”

Sudan has witnessed a state of political and security instability since the Oct. 25, 2021, military coup, when the army seized power ending a power-sharing arrangement with civilian partners in governance, which was aimed at paving the way for democratic elections in Sudan.

Egypt, whose ties with Sudan have warmed in recent years since the overthrow of the regime of former dictator Omar al-Bashir in 2019, fears that the deteriorating political situation in the country would destabilize its southern neighbor.

Sudanese writer Muhammad Mustafa told Al-Monitor that Egypt wants to help settle the crisis created by the military coup, as Sudan has entered a dangerous turning point that directly affects Egypt due to the great connection between the two countries.

Mustafa said that when Sudanese protesters closed the Sheryan al-Shamal road linking Sudan and Egypt more than a month ago, this led to almost complete paralysis in the trade movement through the land crossings between the two countries. The protesters are pressing the Sudanese government to backtrack on the recently approved increase in electricity prices, he explained.

What further complicated the current political scene was the announcement of Sudanese Prime Minister Abdalla Hamdok’s resignation in early January, weeks after his return to the position under a controversial agreement with the army leaders.

During the military coup, Hamdok was placed under house arrest before he returned to his position Nov. 21 following an agreement with the commander-in-chief of the Sudanese armed forces, Lt. Gen. Abdel Fattah al-Burhan. But protesters rejected the agreement, as well as any partnership with the military component.

Under this agreement, Hamdok was supposed to lead a government of technocrats until elections were held in early 2024.

Burhan, who is also the head of the Sudanese Sovereign Council, announced Jan. 20 the formation of a new government of “independent national competencies” including 15 caretaker ministers, but fell short of appointing a prime minister to succeed Hamdok. Burhan pledged to enter into a comprehensive national dialogue to resolve the political crisis.

Since the coup, protesters have been taking to the streets weekly, calling on the army to hand over power to civilians, release political detainees and hold to account those responsible for killing protesters during the demonstrations.

Medics allied with pro-democracy groups say that more than 80 people have been killed in the clashes with security services since the coup.

As it remains unclear whether or not the army is ready to relinquish power, the security forces have recently escalated a campaign of arrests against politicians and activists who reject military rule, amid reports that more than 100 people have been arrested because of their political positions.

Meanwhile, the United Nations Special Mission in Sudan started in January an initiative aimed at saving the democratic path in the country by launching a dialogue between the various political parties and the army with the aim of finding points of consensus and disagreement in an effort to settle the crisis. The initiative gained wide international support, including from the United States and Britain.

Egypt, which supports the UN initiative, says that activating dialogue between the political parties would solve the current crisis and prevent it from degenerating into chaos.

Pro-democracy groups expressed concern that the UN initiative would legitimize the position of the army after the coup. Meanwhile, army leaders insist that the UN should play the role of a political process facilitator, not mediator.

Mirghani said that Egypt is now qualified to engage in mediation to settle the crisis given its strong connections with all Sudanese parties. “Egypt has historically played a direct role in helping the Sudanese political forces unite in the face of serious problems,” he noted. “Should the civil forces unite, Sudan would still have a chance to avoid chaotic scenarios."

Egypt was widely criticized for failing to explicitly condemn the military coup, as some attributed this to its close relations with the Sudanese army leaders. Some Sudanese opposition leaders have even gone so far as to claim that Egypt gave the green light to Burhan to overthrow the civilian government.

However, Sisi denied these allegations Jan. 13. Speaking at a news conference at the Red Sea resort of Sharm el-Sheikh, he stressed that his government does not interfere in the internal affairs of other countries. “Sudan’s national security and stability are extremely important for Egypt,” Sisi said.

However, Mirghani believes that whoever criticizes Egypt for its relations with the military component clearly “misunderstands” its stance. He noted, “Cairo is well aware of the fragility of the security situation in Sudan and fears that it will worsen as it [Egypt] would be the first to pay the price because its national security is linked to Sudanese national security.”

He added, “Egypt is deploying efforts to communicate with the Sudanese civilian political components to overcome the crisis. Until this is achieved, the military component will remain a focal point in ensuring the safety of Sudanese national security, and Egypt’s by extension.”

Cairo’s entry into the line of the Sudanese crisis, despite an initial reluctance, raises a question about the timing, as it comes in the wake of a surprise visit by the deputy head of the Sudanese Sovereign Council, Mohamed Hamdan Dagalo, also known as Hemeti, to Ethiopia to meet Jan. 22 with Prime Minister Abiy Ahmed.

In an article in the London-based Al-Arab newspaper published Feb. 18, Egyptian writer Mohamed Abul-Fadl called on Egypt to swiftly put forth its vision of the crisis in Sudan “before Ethiopia enters the fray as relations between Addis Ababa and Khartoum improve. This would give the former [Ethiopia] an opportunity to repeat its previous mediation experience after the overthrow of the Bashir regime.”

Following the overthrow of Bashir in Sudan, Addis Ababa, in coordination and cooperation with the African Union, sponsored meetings and discussions between the military and civilian components. The meetings resulted in a constitutional document that drew a road map for the transitional phase that the Sudanese army later turned against.

He stressed that there are positive developments between the two countries on the Grand Ethiopian Renaissance Dam (GERD) issue and the border dispute, without adding further details.

Egypt is seeking to maintain close relations with Sudan as the two countries share a common interest and goal to settle the dispute over the controversial GERD that Ethiopia is building on the Blue Nile, which the two downstream countries — Egypt and Sudan — fear will affect their supplies of freshwater.

“The road is not paved for Ethiopia to lead a new mediation,” Mustafa concluded. “Ahmed’s image was greatly distorted after the civil war he launched against the Tigray People’s Liberation Front and the ensuing serious human rights violations, in addition to the border tension between Ethiopia and Sudan."