Clashes have broken out again between Palestinian residents, Jewish settlers and security forces in Sheikh Jarrah. 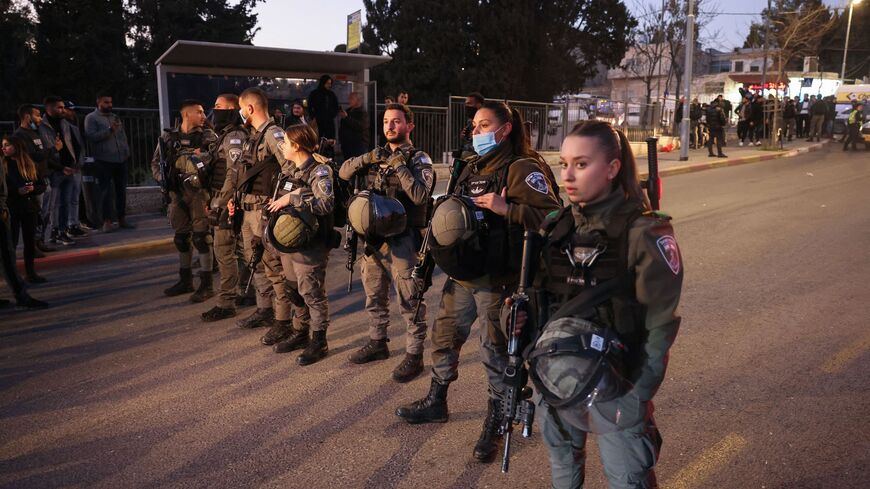 Israeli security forces close a street following clashes between Palestinians and Israeli settlers during a visit by far-right lawmaker Itamar Ben Gvir of the Religious Zionism alliance (unseen), in the east Jerusalem neighborhood of Sheikh Jarrah on Feb. 13, 2022. - AHMAD GHARABLI/AFP via Getty Images

Tensions are high in the east Jerusalem neighborhood of Sheikh Jarrah. Police and the Shin Bet arrested two young Palestinians today suspected of throwing Molotov cocktails Saturday night at the home of a Jewish family, setting it on fire. The Yoshvayev family was not at home when the incident took place, so no one was injured, but the house was severely damaged. The incident came after several others in which Molotov cocktails were thrown at cars belonging to the family.

Sheikh Jarrah is a predominantly Palestinian neighborhood, but in the past few years, right-wing and settler associations have petitioned the court to recognize Jewish ownership over some buildings and land in the area, mostly houses and plots that belonged to either Jewish families or Jewish communities that settled before 1948 in the vicinity of the ancient Tomb of Simeon the Righteous, which Jewish residents use to refer to the neighborhood. A few dozen houses were built on these lands after the war, when Jordan controlled the area, and Palestinian families settled there. A legal battle has been ongoing over these properties since the 1990s, and courts have ordered the eviction of some of the Palestinian families. Tensions in the neighborhood were one of the reasons behind the May 2021 conflict in Gaza.

Following the incident, radical right-wing Knesset member Itamar Ben Gvir arrived to the neighborhood Sunday morning. He declared he was setting up office there, where he will receive Jewish residents with complaints about their personal safety. Ben Gvir’s arrival prompted violent clashes between Arabs and Jews. Joint List Knesset members Ofer Cassif and Ahmed Tibi arrived at the scene Sunday evening as the clashes continued, and Ben Gvir fainted and was taken to hospital. He later accused Public Security Minister Omer Bar Lev of ordering police officers to assault him during the clashes. Dozens of people were reported injured.

Police and Bar Lev claimed that Ben Gvir was intentionally provocative and increased tensions in the neighborhood, and that police had no orders to hurt him. "Never has a Knesset member in Israel raised a hand against a police officer. Immunity is sacred; violence is obscene. Thank you to police forces operating with determined forces in the sensitive area of Sheikh Jarrah despite the provocations," Bar Lev tweeted yesterday.

This morning, Ben Gvir returned to the neighborhood with a bandage around his head. He showed reporters a letter from Hadassah Hospital discharging him from the emergency room and confirming that he had suffered a head injury, and reiterated his claims that Bar Lev ordered his assault.

Parallel to these developments, the police are now also investigating incidents of vandalism to cars in the Palestinian village Jinsafut, apparently in connection to tensions in Jerusalem’s Sheikh Jarrah neighborhood. Police also discovered graffiti in Hebrew sprayed on walls nearby, saying, “There will be a war over Simeon the Righteous.”

Prime Minister Naftali Bennett held an emergency meeting this afternoon with Bar Lev and representatives from the police and Shin Bet over the escalation in Sheikh Jarrah.