The High Court decides to again discuss the petition by Palestinian residents of the Jerusalem Sheikh Jarrah neighborhood against eviction orders issued at the request of Jewish settlers. 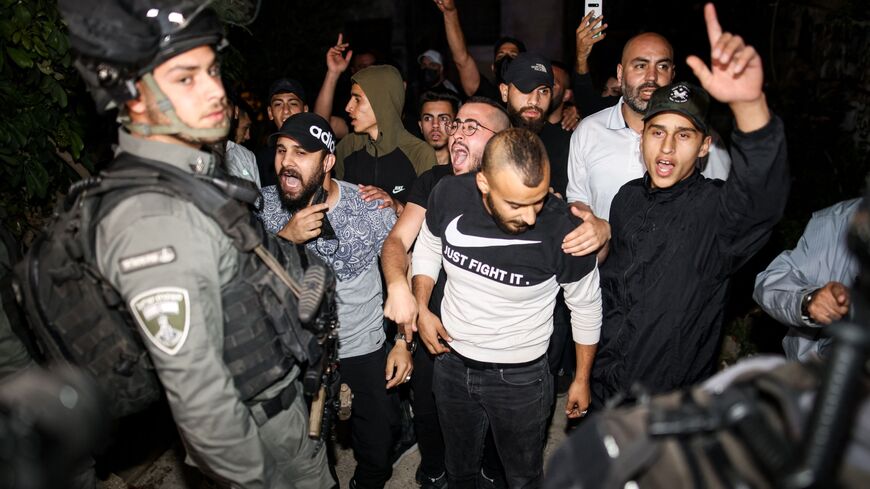 Palestinian protesters chant slogans in front of Israeli border guards on May 6, 2021, as they demonstrate in solidarity with local Palestinian families of the Sheikh Jarrah neighborhood of Israeli-annexed East Jerusalem, who are facing eviction as part of an ongoing effort by Jewish Israelis to take control of homes in the neighborhood. - AHMAD GHARABLI/AFP via Getty Images

High Court Justice Dafna Barak-Erez on May 6 ordered  Palestinian plaintiffs and opposing settlers to come back to court May 10. The plaintiffs, residents of the East Jerusalem neighborhood of Sheikh Jarrah, are seeking to cancel eviction orders issued against them at the request of right-wing activists a few months ago.

For a few evenings now, when the daily Ramadan fasting ends, young Palestinians gather at Sheikh Jarrah to demonstrate against the intention to evict, in stages, some 300 residents from their homes. Some of the demonstrators are not residents of the neighborhood, but are coming there to express their solidarity with the families targeted by the eviction orders. On May 5, ahead of the High Court session, clashes broke out between Palestinians and Jewish right-wing militants. Police detained some Palestinian demonstrators, who were for the most part released later on.

Altercations broke out the evening of May 6 between local Palestinian residents and members of far-right Jewish Power [Otzma Yehudit] party headed by Itamar Ben Gvir, who had set up office in a tent in the neighborhood May 2. Both sides threw rocks at each other, while police officers attempted to break up the brawl.

Tensions in East Jerusalem have increased over the past few weeks. At the beginning of the Muslim holy month of Ramadan, clashes broke out near the Damascus Gate, outside the Old City. Palestinian residents clashed with police and with Jewish extreme-right activists. Now demonstrations in Jerusalem are taking place mostly in Sheikh Jarrah, where Palestinian residents of the neighborhood are pitted against Jewish settlers who claim ownership of some of the older buildings there.

The Sheikh Jarrah dispute has been going on for 15 years, but it was only in recent days that a Palestinian campaign over the fate of the neighborhood has been gaining momentum. At the core of the dispute are several land plots located near the ancient tomb of Simeon the Righteous. Jewish settlers claim the lands were purchased by Jewish Ashkenazi and Sephardic communities in the 19th century, then abandoned in 1948 when the War of Independence broke out and the Jewish families were forced to flee. The Palestinian families living there apparently arrived in the neighborhood at the beginning of the 1950s when East Jerusalem was under Jordanian control. But did the Jordanian government make the Palestinian tenants legal owners of the lands and their homes? The settlers say no.

Settlers have been buying in recent years the rights to these plots from the descendants of the Ashkenazi and Sephardic communities. An organization called the Simeon Estate [Nahalat Shimon] is reportedly in charge of this process and champions the legal battle over the lands. In two instances last year, judges backed the Jewish ownership claims; hence the eviction threat. Some Palestinian families could be evicted as soon as next week; others could be evicted this summer.

Tensions near the Damascus Gate and condemnation from Jordan, Gulf states and Europe over Israeli right-wing provocations there might have contributed to the recent momentum of the campaign for Sheikh Jarrah. The fact that Jerusalem’s police agreed after international pressure to remove security fences placed by the Damascus Gate has been perceived as victory by young Palestinians, and encouraged those fighting against the Sheikh Jarrah eviction. The hashtag #SaveSheikhJarrah has thus become viral. Former diplomatic correspondent for Haaretz Noa Landau, for instance, has been retweeting the story, which received until recently little attention in the Israeli press.

The battle over Sheikh Jarrah generated reactions from both Fatah and Hamas. Palestinian President Mahmoud Abbas said May 4 he would ask the International Criminal Court to include the neighborhood’s case in its investigation of alleged Israeli war crimes. Also, in a rare statement, Mohammed Deif, the head of Hamas' armed wing, Izz ad-Din al-Qassam Brigades, warned that Israel would pay a heavy price if the evictions went ahead.

Israeli authorities have kept quiet so far on Sheikh Jarrah and Deif's threat.

Abbas recently decided to suspend Palestinian elections, blaming Israel for allegedly blocking voting in East Jerusalem. This in turn has increased tensions in the West Bank and in Gaza, as manifested in recent rocket fire from the Strip toward Israeli southern communities. Israeli authorities are well aware of that.

The European Union fears an escalation over the issue. A statement issued by the EU before the May 6 court hearing said the possibility of an eviction was "alarming." "Such unilateral actions are illegal under international humanitarian law and only fuel tensions on the ground. The Israeli authorities should cease these activities and provide adequate permits for legal construction and development of Palestinian communities," read the statement.