Sudan moves ahead with Israel ties

Tel Aviv continues to exchange visits with the contested authorities in Khartoum and deepen their security cooperation, in line with the coup generals’ allies in the Gulf and Egypt. 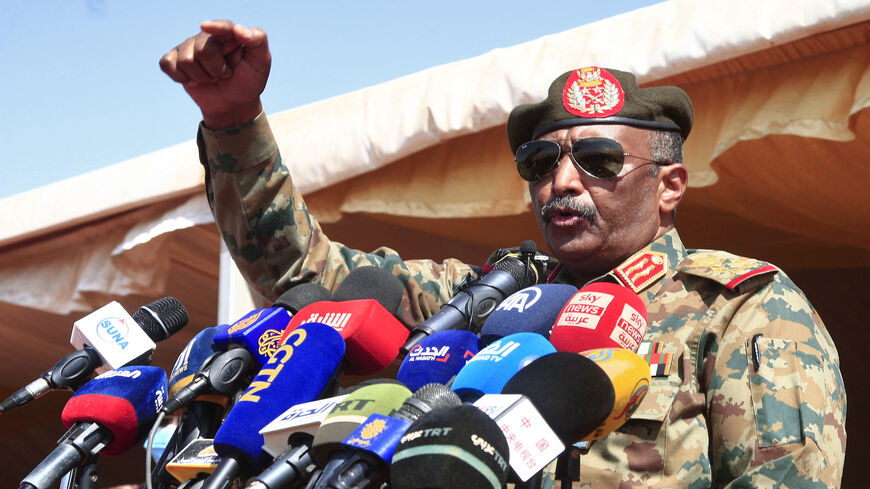 In the final part of the interview, Burhan openly acknowledged and defended the existence of relations with Israel. The general admitted that relations with Tel Aviv are a sensitive issue in his country. But he confirmed that there is security cooperation between the two parties, and stressed its importance for the security of Sudan and the region, as well as for Khartoum’s integration into the international community.

He said that the exchange with Israel had made it possible to uncover the presence of terrorist groups in Sudan’s territory that endangered national and regional security. And although he did not offer details, the general noted that cooperation with Tel Aviv had enabled Sudanese authorities to make some arrests. The interview was aired only a few days after the latest report about a visit by a Sudanese delegation to Israel.

“We want to solve problems with dialogue and agreements, this is why cooperation, specifically cooperation on matters of defense and intelligence, hasn’t stopped. This is natural and legitimate, and it will help us maintain security in our country and the region,” Burhan stated, noting, that they “are not hiding it, and we have nothing to worry about.”

Burhan himself was already at the forefront of the dramatic normalization of relations between part of the Sudanese authorities and Israel in the midst of the transition that his seizure of power on Oct. 25, 2021, blew up. In early February 2020, Burhan met for the first time with Israel’s then-Prime Minister Benjamin Netanyahu in Entebbe, Uganda, during a trip that marked a sudden turn in relations. The two agreed to “start cooperation leading to normalization of the relationship,” according to a statement from Netanyahu’s office after the meeting.

News of the encounter, however, was not well received in Sudan, where solidarity with the Palestinian people remains an important issue, and it showed new gaps between the civilian and military leaders then piloting the transition. Government spokesman Faisal Salih said back then that the Cabinet was not aware of the summit. And revealing new details about the trip in a recent appearance on Clubhouse app, Mohamed al-Faki, member of the Sovereign Council dissolved by Burhan after the military coup, said that the meeting sparked an intense confrontation between the general and several transitional leaders that nearly caused the civil-military partnership to collapse, Al-Taghyeer reported.

The meeting in Entebbe came just months before Khartoum signed a controversial peace deal with Israel as a condition for removing Sudan from the US list of state sponsors of terrorism. In January 2021, Sudan joined the US-brokered Abraham Accords to normalize its relations with Tel Aviv, a measure that many considered lacking in popular support.

“When [Donald] Trump got to power, the Americans made it very clear [to Sudan] that the route to Washington crossed through Jerusalem,” said Haim Koren, senior research fellow at Reichman University and ambassador to Egypt in 2014-16. He told Al-Monitor that Khartoum and Tel Aviv have a long record of largely overlooked dealings and that Sudan’s rulers have not always been opposed to establish ties with Israel.

Yet since then, virtually no progress was registered between the civilian leaders of the two countries, mostly attributed to the reluctance of the Sudanese side, in contrast to the relatively frequent meetings between military and security delegations and the greater inclination of the Sudanese military authorities to strengthen ties with Israel. Before the coup, neither Khartoum nor Tel Aviv went so far as to announce plans to exchange ambassadors or open embassies in the other country, marking a far cry from the fanfare that has followed the public establishment of relations between Israel and Gulf countries. And the Sudanese Foreign Ministry systematically distanced itself from the delegations visiting Israel, in a clear sign of the lack of control over its country’s foreign policy.

One of the only exceptions to this rule came last October, when Sudanese Justice Minister Nasredeen Abdulbari met in Abu Dhabi with Israel’s Deputy Foreign Minister Idan Roll and the country’s Regional Cooperation Minister Issawi Freij. Abdulbari and Roll agreed on future cooperation between the two countries, and put special emphasis on joining hands in technological training to help young people to adapt to the changes in the labor market as well as in educational and culture cooperation, Roll's and Freij’s office tweeted.

“When we get peace with somebody, we don’t have the luxury to look into what kind of leadership [these countries] have,” said Koren, who was also the first Israeli ambassador to South Sudan. “When the generals, in the new temporary military-civilian government, started to speak seriously about a relationship with us, that was very good for us for two reasons. First, [because] they stopped their relationship with terrorism, including Hamas, Hezbollah and Israel, which is very important. And it was very clear that their relationship with us was to promote an economic agenda, which is fine.”

But the partial relationship between Sudan and Israel, almost exclusively dominated by the military on the Sudanese side, has become particularly problematic in the wake of the seizure of power in October. While most Western governments were quick to condemn the coup and have called on the generals to hand over power to a civilian government, Israel has chosen to remain silent on the matter, further reinforcing the perception that Tel Aviv welcomes Burhan’s takeover. So much so that the Biden administration has gone so far as to ask the Israeli government to intervene in the crisis and use its close ties with Burhan to urge him to restore a civilian government, Israeli media has reported.

“Sudan, and the military regime in particular, is looking for allies and for friends. Their motivation is obvious. Israel, obviously, within the context of the Abraham Accords, wants to have relations with the countries of the region and that’s perfectly logical and understandable,” Alberto Fernandez, former charge d’affairs at the US Embassy in Khartoum, told Al-Monitor. “The danger for Israel is that its connection with the military risks making the Israel dimension an issue of domestic policy in Sudan.”

Since the military takeover, visits between Israeli and Sudanese delegations have not stopped, to the point that Burhan has come to spearhead the relationship at a time when the country finds itself once again remarkably isolated internationally. Two weeks before the coup, a Sudanese military delegation held talks with officials from the prime minister’s office and Mossad in Israel, Axios reported. And in early November, a Mossad delegation traveled to Khartoum to meet with military officials.

Then, in January, the Israeli broadcaster Kan 11 reported that an Israeli delegation arrived in Khartoum after a layover in Sharm el-Sheikh, Egypt, to hold talks with Burhan and other military leaders. And on Feb. 9, both Reuters and Kan reported that a top official of the Sudanese military government was in Israel on another unannounced visit.

Commenting on what the Sudanese generals have to gain from a closer relationship with Israel, Jihad Mashamoun, researcher and analyst on Sudanese affairs, told Al-Monitor, “They want to use Israel’s lobbying capacity in Washington to have the support of the Untied States in seeing the military as a capable partner of maintaining peace and security in Africa and the Middle East.”

He said, “Burhan and the military focus on counterterrorism operations with Israel in order to improve their image in the United States and to make it feel that the military is a capable force and a reliable security ally."

For Israel, on the other hand, Fernandez noted that the current context poses a challenge “between short-term benefits and long-term gains.” He added, “It is in Israel’s interest to have a long-term, lasting, strong relationship with Sudan, and not so much with a party, especially a military party, in a very volatile situation.”