The military leadership in Sudan had pushed for normalization with Israel, but in a situation of political turmoil and without American support, it may now find the process difficult to advance. 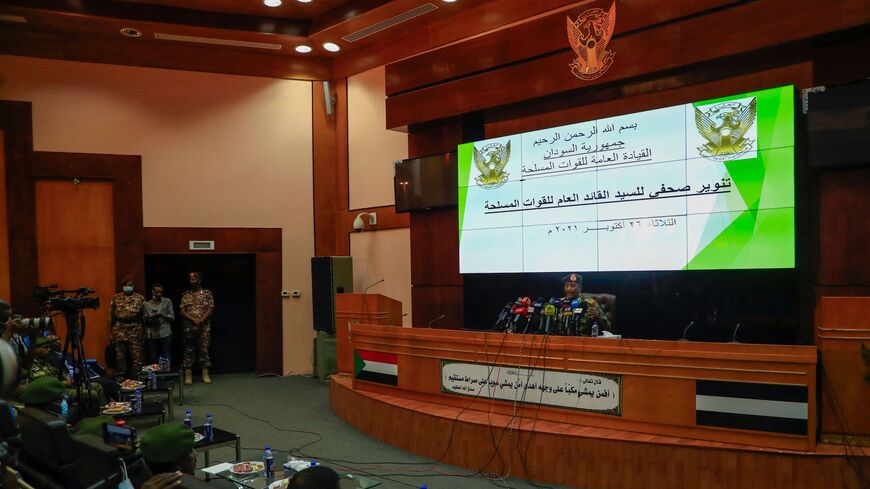 Sudan's top Gen. Abdel Fattah al-Burhan speaks during a press conference at the General Command of the Armed Forces in Khartoum on Oct. 26, 2021. - ASHRAF SHAZLY/AFP via Getty Images

France, the United States, the African Union and other international bodies all strongly reacted to the news from Sudan about a military coup. Israel, on the other hand, has kept silent. Israeli news outlets did not even get quotes from unnamed diplomats.

The stakes for Israel are high. Israeli journalist Barak Ravid tweeted Oct. 25 that several elements in the Israeli government have been involved recently in one way or another in Sudan’s domestic politics. “This raises big questions about what Israel knew over what is happening now in Khartoum and how much its moves have affected what is happening now,” he noted.

Though he did not say that Jerusalem had encouraged or was involved in what just transpired in Khartoum, Ravid’s words stirred controversy in Israel. His comments raised important questions about the nature of Israel’s relations with Sudan and how much the coup in Khartoum is expected to influence the ongoing normalization process.

In February 2020, former Prime Minister Benjamin Netanyahu met in Uganda with head of the Sudanese Sovereign Council Gen. Abdel Fattah al-Burhan. It was Netanyahu who then announced that the two countries intended to normalize ties. In December 2020, the United States agreed to remove Sudan from its blacklist of countries supporting terrorism. And in January 2021, Sudan signed onto the Abraham Accords as the fourth country to join the US-brokered agreement after the United Arab Emirates, Bahrain and Morocco.

Unlike the three other countries, Sudan did not sign an agreement with Israel to open embassies or to exchange ambassadors, though Sudan did abolish its longstanding boycott of Israel in April. The normalization process reached a diplomatic stalemate, apparently over disagreement on the issue of military or civilian leadership in Khartoum.

Following the toppling of Sudanese dictator Omar al-Bashir, the army took control of the country. After several months of negotiations, the army agreed to establish the Sovereign Council, headed by Burhan but with a civilian prime minister and several other civilian ministers. The military leadership was and still is keen on normalizing ties with Israel, believing it will facilitate the ties of economy-crisis-stricken Sudan with the United States and also offer Sudan intelligence and security advantages. A large Israeli delegation headed by then-Intelligence Minister Eli Cohen visited Khartoum Jan. 26, and reports in the Arab media Oct. 8 revealed that a senior Sudanese intelligence delegation had visited Israel.

The civilian leadership in Sudan, which is member of the Arab League, is more prudent on Israel and continues to highlight its commitment to the Palestinian cause. Thus, for instance, Sudanese Foreign Minister Mariam al-Sadiq al-Mahdi said Sept. 26 there are currently no plans to establish an embassy for Israel in Khartoum. “There is no talk at any official level,” she noted, adding that “abolishing a law on boycotting Israel does not mean that we consider opening an Israeli embassy in Khartoum.”

Contrary to the Emirates or Bahrain, there is little talk in Israel over the market Sudan might represent for Israeli businesspeople. The meeting in Dubai could change that, focusing future relations on trade and development. Nevertheless, for the moment, the stakes seem to be different. As one of the largest countries in the Arab League and east Africa, Sudan carries significant diplomatic clout. Its stability or instability could greatly affect its neighbors. Its location on the Red Sea is strategically important for Israel, as is the role it could play in combatting regional Islamic extremist movements and terrorism.

Still, with the latest developments in Khartoum, normalization could be put on hold. On the face of it, the military takeover should work in Israel’s favor. In reality, a destabilized Sudan, with a military regime lacking international legitimacy, will have other issues to deal with and without the support of the United States, full normalization is unlikely to take place.

The United States has now suspended its $700 million emergency assistance to Sudan and is calling on the military to back away from the coup. In an  Oct. 25 briefing, State Department spokesperson Ned Price said, “I think the normalization effort between Israel and Sudan is something that will have to be evaluated as we and as, of course, Israel watches very closely what happens in the coming hours and the coming days. I wouldn’t want to weigh into that just yet.” The Israeli news media reported today that Secretary of State Antony Blinken spoke yesterday on the phone with Defense Minister Benny Gantz. Sudan was apparently one of two issued discussed.

So what’s next for normalization? Israel’s former premier should certainly get the credit for jump-starting relations with Sudan. On the other hand, Netanyahu chose Burhan as his dialogue partner, putting little effort into establishing communication channels with Sudanese civilian leaders. Did Netanyahu box Israeli diplomacy into a corner? The meeting of Roll and Frej with the Sudanese justice minister could indicate that the government would like to try a different approach — one that could work, of course, only if and when Sudan regains civilian rule.