Israel is hoping that Sudan will soon finalize the normalization process it agreed upon several months ago in the framework of the Abraham Accords. 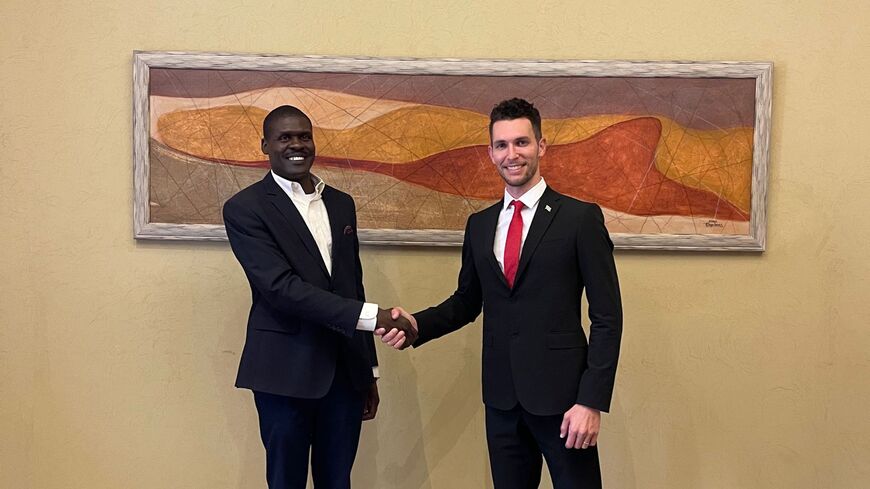 Roll tweeted after the meeting, "Continuing to be part of the driving force of the Abraham Accords. It was a pleasure meeting today with Sudan’s Justice Minister Nasredeen Abdulbari. We agreed on future cooperation between the two countries under the accords. Our goal is to join hands in technological training, in order to help young people of all sides to the accords to adapt to the changes in the labor market and give them more capabilities in which they can also engage remotely, as an integral part of the high-tech industry. We also spoke about the importance of normalizing the relations between both countries." Roll posted a photo of himself shaking hands with the Sudanese minister.

Frej's office also tweeted a photo of him shaking hands with his Sudanese colleague and quoted Abdulbari as saying, "Educational and Culture cooperation surpasses Economic cooperation; We must learn to know one another and strengthen human bonds," and added that the two ministers agreed to promote joint projects and activities. In an interview with Army Radio today, Frej said, "There was a very interesting meeting, which also surprised me. I discovered a country that sees itself and operates as if it is already deep within the Abraham Accords."

Frej also told the Israeli press that a marginal nationalist minority in Sudan is trying to sabotage the rapprochement efforts, but there are still on the right track. He said he believes bilateral agreements between Israel and Sudan will be signed soon.

Sudan declared a boycott of Israel back in 1958. After the 1967 Six Day War, Sudan hosted the fourth Arab League Summit, which produced the landmark Khartoum resolution known as the three no's: no to peace with Israel, no recognition of Israel and no negotiations with Israel. Over the years, the Sudanese government has been accused of increasingly supporting extremism and terrorism, leading the United States to designate it as a state sponsor of terrorism in 1993.

But on Feb. 3 2020, then-Prime Minister Benjamin Netanyahu visited Uganda, secretly meeting with the head of Sudan’s Sovereign Council, Gen. Abdel Fattah al-Burhan. After the meeting, Netanyahu announced that Israel and Sudan, two enemy countries, had agreed to work together toward normalizing ties. A statement issued by Netanyahu’s office said Burhan had "agreed to start cooperation leading to normalization of the relationship between the two countries."

As part of the September 2020 Abraham Accords Israel signed with the United Arab Emirates, with Bahrain and with Morocco, under American auspices, the United States agreed to remove Sudan from its terror list. Sudan in return agreed to end its boycott. A few weeks after the first accords were signed, Sudan signed on as well.

Last January, then-Intelligence Minister Eli Cohen visited Sudan and met in Khartoum with Sudanese Defense Minister Yassin Ibrahim. He was criticized in Israel for bringing with him large delegation of business people. It was said that Cohen bypassed and sidelined the foreign affairs and economy ministers, taking on the roles of other cabinet members himself.

Over the last year, statements by senior Sudanese officials have suggested that the military leadership was pushing for rapprochement with Israel, while the civil leadership was more reluctant. For example, Sudan’s Foreign Minister Mariam al-Sadiq al-Mahdi had downplayed emerging ties with Israel, saying in an interview last September that there are currently no plans to establish an embassy for Israel in Khartoum. "There is no talk at any official level. Abolishing the law on boycotting Israel does not mean that we're considering opening an Israeli embassy in Khartoum," she noted.

Neither Khartoum nor Jerusalem have announced any intention to open an embassy or send ambassadors. Responsibility for the diplomatic stalemate seems to rest on both sides. A report last June claimed Sudan was disappointed with the outcome of the normalization agreement with Israel. Sudan had apparently expected massive American investments in agriculture and technology that did not happen.

So what changed this week? It seems that the Biden administration has been laboring to convince both sides to accelerate efforts towards normalization. Reports on Oct. 8 revealed that a delegation of Sudanese security officials had secretly traveled to Israel for a two-day visit to discuss bilateral relations. The delegation was reportedly led by Mohamed Hamdan Dagalo, a very senior Sudanese security official. However, the Sudanese Foreign Ministry distances itself from these events on Oct. 13, saying it bore no responsibility for the delegation's visit in Israel nor for the senior meeting in Abu Dhabi. "The ministry is not responsible to talks or private meetings of officials conducted outside the official foreign policy of the state."

Haim Koren is a senior research fellow at the Herzliya Inter-Disciplinary Institute. He is a former ambassador to Egypt and was Israel’s first ambassador to South Sudan. Talking to Al-Monitor, Koren said that these moves and statements by Sudanese officials are characteristic of the modus operandi of the Sudanese Interim Council, which currently rules the country. "The interim transitional regime enables those who object to the rapprochement, like Minister al-Mahdi, to release all sorts of declarations against meeting Israelis. It is their way of demonstrating the alleged difficulties they must cope with on the way to rapprochement." In reality, he said, they do advance relations with Israel. "They see rapprochement and normalization as a highly Sudanese interest, mostly an economic one. The delegation last week and the ministerial meeting this week signal advancing the Israeli track. Normalization is clearly [likely] to materialize in the near future."

Speaking at an Oct. 13 joint press conference in Washington with Secretary of State Antony Blinken and with Emirati Foreign Minister Abdullah bin Zayed Al Nahyan, Foreign Minister Yair Lapid addressed the Abraham Accords, though he did not mention Sudan specifically. "We’re working on expanding the Abraham Accords.  But first and foremost, and we’ve discussed this today at length, we want to make sure the current agreements we have will be a success story," he noted in what could be considered an optimistic forecast for relations with Khartoum.