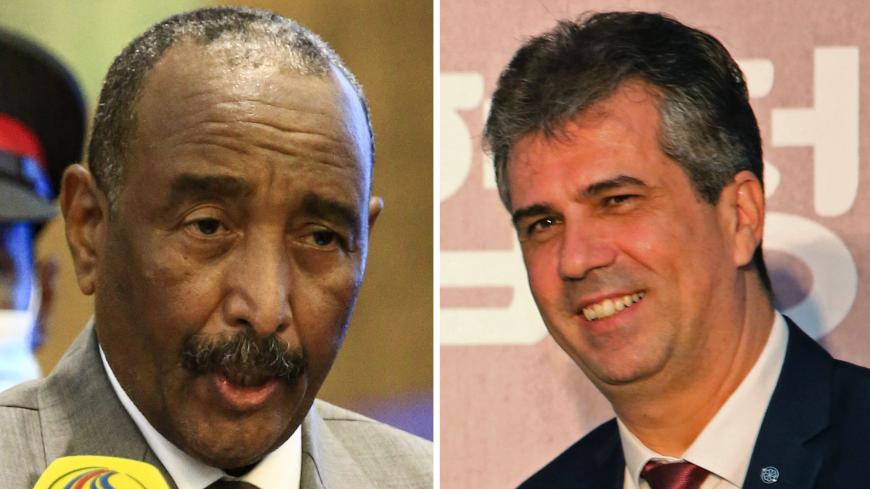 Intelligence Minister Eli Cohen visited Sudan on Jan. 25, in the first Israeli public ministerial trip to the country. It was also the first Israeli ministerial visit to a Muslim country since the signing of the Abraham Accords with the United Arab Emirates and Bahrain in September and the announcement on normalization between Israel and Sudan in October.

Prime Minister Benjamin Netanyahu had instructed his Cabinet ministers not to visit the Emirates or Bahrain before he visits there first. Reportedly he plans to visit both countries mid-February. In contrast, Netanyahu has no plans to visit Sudan before the March elections.

Cohen arrived in Khartoum heading a delegation from his ministry and from the National Security Council. The delegation held talks with senior Sudanese officials, including the chairman of the Sovereignty Council, Gen. Abdel-Fattah Burhan, and Sudanese Defense Minister Yassin Ibrahim. During the meeting with the latter, Cohen signed a memorandum of understanding on security-related issues.

According to an official announcement by Cohen’s ministry, the delegation discussed with Sudanese counterparts diplomatic, security and economic issues. It was noted that both sides spoke about the necessity of establishing regional security as a means of development and agreed to deepen intelligence cooperation. They also discussed the possibility of Israel joining the Red Sea Council, where Egypt and Saudi Arabia are also members.

Members of the Israeli delegation brought up in the talks a series of potential economic/development projects that could be advanced, in fields of water management, smart agriculture, health and aviation. One possibility would be for Israeli companies to build up a desalination plant in Sudan, and also for Sudanese to come to Israel to learn about Israeli agriculture innovations. Another topic discussed was Sudanese regulations that threaten immigrants coming back from Israel with imprisonment. The two delegations also agreed to inspect ways of encouraging mutual investments.

Sudanese leadership has been split over renewal of ties with Israel. Burhan has been the main Sudanese force pushing for normalization with Israel, while civilian Cabinet ministers expressed caution and even reluctance, mainly because of Sudan’s traditional support of the Palestinian cause. Burhan had secretly met with Prime Minister Benjamin Netanyahu in Uganda in February 2020. The meeting became almost immediately public, with Netanyahu expressing optimism about a renewal of ties with Sudan, although this took a year to become reality.

The Trump administration had pressured Sudan to join the Abraham Accords and renew ties with Israel, but this happened only after the United States agreed to remove Sudan from the blacklist of countries supporting terror. This step brought about the expected change of mind in Khartoum. It was on Jan. 6, in the presence of US Treasury Secretary Steven Mnuchin, that Sudanese Justice Minister Nasredeen Abdulbari signed on to the accords. Still, the openings of an Israeli embassy in Khartoum and a Sudanese embassy in Israel are not yet in the offing.