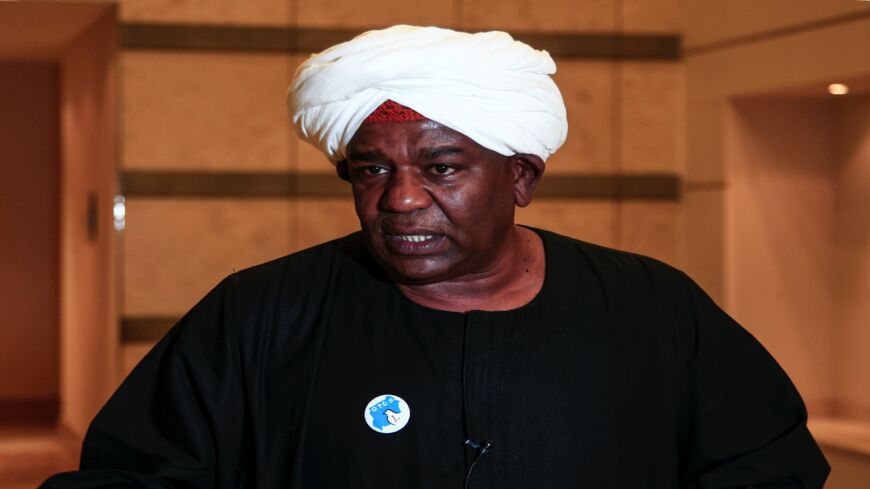 Sudanese businessman Abu al-Qassem Bortoum speaks during an inter-faith event to promote religious tolerance in Sudan's capital, Khartoum, on Feb. 6, 2021. The Sudanese businessman defended hosting the event in the Muslim-majority country that also included Jews, Christians and Hindus. Critics from an Islamist group had argued such events would heighten tensions a month after Sudan's landmark decision to normalize ties with Israel in a US-brokered deal. - EBRAHIM HAMID/AFP via Getty Images

On April 19, Sudan officially decided to abolish its 1958 law on boycotting Israel. A bill for the abolishment of the boycott was presented to the Sudanese Cabinet on April 6 and ratified this week jointly by the Sudanese ruling Sovereignty Council and the Cabinet. Sudanese Justice Minister Nasredeen Abdulbari announced the decision, which should enable bilateral ties to progress. It would allow Sudanese to do business with Israelis and enable Sudanese to visit relatives living in Israel.

Evidently, the Sudanese decision is significant both practically and on the symbolic level. On top of the 1958 boycott, Israel still remembers the post-1967 Six-Day War Khartoum Resolution of the Arab League containing the three famous nos: No peace with Israel. No recognition of Israel. No negotiation with Israel. That being said, official Israel kept quiet and did not react to the decision to abolish the Sudanese boycott. Neither the office of the prime minister nor the Foreign Ministry issued any comment on the issue. Sources at the Foreign Ministry say that for the sake of bilateral ties, Jerusalem needs to keep a low profile on any such advancements in Khartoum.

The necessity of keeping a low profile was a lesson learned the hard way. On April 16, Sudan denied reports that it would send its first official delegation to Israel. Two sources told Reuters that Khartoum had scrapped a planned visit. They confirmed such an invitation to visit Israel had been accepted but said plans had later changed. Sudan's general intelligence service was quoted as saying that "news circulating on some media and social media about the visit of a security delegation to Sudan was not true."

No one in Jerusalem expects to establish the same scope of ties with Khartoum as with Abu Dhabi or Manama. Still, Sudan is important to Israel strategically. Haim Koren, Israel’s former ambassador to Egypt and South Sudan, currently serves as a senior research fellow at the Interdisciplinary Center Herzilya. He is considered one of Israel’s senior experts on the region. "If you consider Israel’s overall interests, such as access to the Red Sea, with its tremendous geopolitical importance, relations with East Africa and regional stability vis-a-vis Islamist groups in the continent, then you get a different picture on Sudan. For Israel, the strategic continuity with Egypt, Eritrea, Sudan, Ethiopia, the corridor along the Red Sea and the corridor leading to East Africa are extremely significant," says Koren.

For Koren, despite what is perceived in Israel as a slow and even hesitant Sudanese pace, Khartoum is fully committed to advancing diplomatic relations with Jerusalem. Sudan’s former leader Omar al-Bashir already took the first steps in that direction after severing ties with Iran in 2016. At the time, Sudanese Foreign Minister Ibrahim Ghandour said (a first from a Sudanese official) his country was open to the idea of normalizing ties with Israel.

Since the toppling of Bashir, the current regime in Sudan, especially the head of the country’s Sovereignty Council, Gen. Abdel Fattah al-Burhan, and his vice president, Gen. Mohamed Hamdan "Hemeti" Dagolo, has been pushing for ties with Israel. This became apparent in 2018 when Prime Minister Benjamin Netanyahu met with Burhan in Uganda. Declarations made in Sudan over the past two years clearly demonstrate their understanding that the country’s dire economic situation requires all the help it can get, including from Israel, be it financial investments, assistance in smart agriculture, water management and more. Ties with Israel were clearly the road for Sudan to be removed from the American list of terror-sponsoring countries — another essential step for Sudan to start recovering.

Following the announcement last year of normalization of ties, in a sign of friendship, Israel sent to Sudan last October $5 million worth of wheat. Koren explains that such gestures on Israel’s part are of great significance for a country that has been facing one environmental catastrophe after another in recent years, including highly destructive floods, locus swarms and extending dry seasons.

At the same time, Jerusalem worries that Sudan is developing high expectations that Israel might not be able to fulfill. Speaking on condition of anonymity, a diplomatic source told Al-Monitor that ‘’Khartoum wants low-profile diplomatic relations accompanied by large volume assistance. Sudan is certainly on the list of our strategic allies to benefit from cooperation projects, and we are advancing in some areas, but so are some other Muslim and Arab countries. With Israel in a transition period, no one knows how its international cooperation budget will look like under the next government.’’