Sudan’s military leader turns to UAE to shore up authority

Gen. Abdel Fattah al-Burhan made his first official visit to Abu Dhabi mainly a search for economic assistance, but the dubious outcome of his trip has sparked controversy at home. 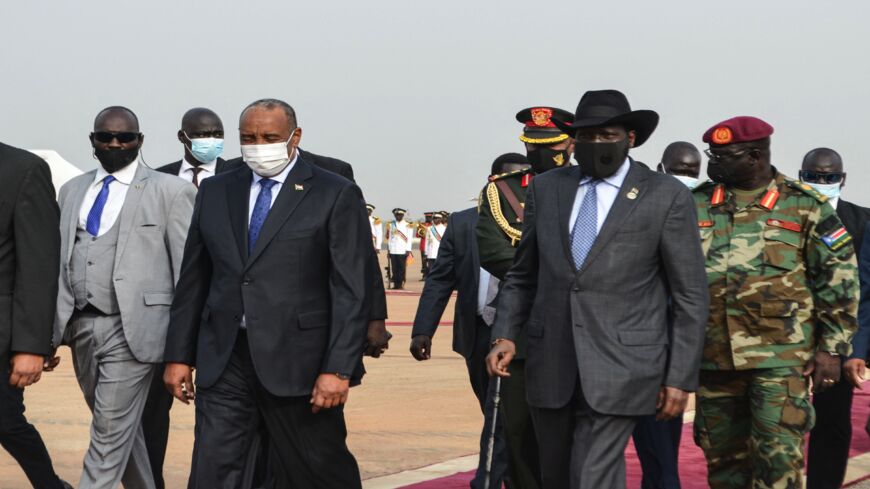 Dressed in a suit and tie, Gen. Abdel Fattah al-Burhan, leader of Sudan’s October coup and head of the contested Sovereign Council that runs the country, landed back in Khartoum on March 13 after his first publicly announced official trip — a four-day visit to the United Arab Emirates (UAE) — since taking power. He was accompanied by a delegation comprised of, among others, Minister of Finance Gebreil Ibrahim, Minister of Foreign Affairs Ali Al Sadiq, and director of General Intelligence Services Ahmed Ibrahim Ali Mufaddal.

At a press conference held as soon as they arrived at Khartoum International Airport, Sadiq said that during his trip, Burhan addressed with Emirati officials the current situation in Sudan, which is marked by severe instability, and the efforts to consolidate its authority. More importantly, the visit served to discuss an array of topics of common interest, with a special emphasis on economic cooperation — which the acting foreign minister admitted represents their main focus of attention at the moment.

“Gen. Burhan’s visit to the UAE could be seen through a political and economic lens,” Mohammed Soliman, a researcher at the Middle East Institute, told Al-Monitor. “The UAE has a strategic interest in stabilizing the political situation in Sudan,” he noted, and “economically, leaders in Khartoum look to Abu Dhabi for financial support.”

The UAE formally called in November for the restoration of Sudan’s civilian-led transitional government. In the wake of the coup, Abu Dhabi had stressed the need to stabilize the country as soon as possible, a stance that is interpreted in some quarters as a tacit acceptance of the military takeover. Since the 2019 fall of former dictator Omar al-Bashir, Abu Dhabi has increasingly deepened its relations with Sudan’s military and paramilitary leaders, and it has maneuvered to shore up its position over that of civilians.

“The Emirates have been always influential in Sudan, even before the military coup. But its role became more emphasized after the removal of Bashir because of its relationship with the [military junta] of Burhan and [paramilitary leader] Hemedti, and also because it was working with the civilian alliance to sign the agreement with the military,” said Jihad Mashamoun, a researcher and analyst on Sudanese affairs, to Al-Monitor.

Following a meeting between Burhan and Crown Prince of Abu Dhabi and de facto ruler of the UAE Sheikh Mohammed bin Zayed, the latter expressed — according to Sadiq — his support for the current Sudanese authorities. Prince Mohammed also stressed the importance of focusing on the transitional period in Sudan in order to overcome the country’s political challenges and ensure its stability and unity, Emirati state news agency WAM reported, likely referring to the generals’ roadmap, which is widely rejected on the streets. Yet his ability to influence the process as he did in the past is now highly doubtful.

Without including civil society or a wide selection of political stakeholders, however, "any top-down mediation effort is doomed to fail, as protests are likely to continue and civilian parties remain deeply skeptical of rejoining the military and security forces,” Gerrit Kurtz, a researcher focused on Sudan at the Berlin-based SWP research institute, tolf Al-Monitor.

On the economic front, Prince Mohammed agreed to inject large amounts of money into weakened Sudanese banks, according to what Sadiq announced upon his return to Khartoum. “An agreement between the two governments and the private sector in the two countries has been reached to support Sudanese banks with significant amounts, enabling them to play their role in developing the Sudanese economy,” stated Sadiq, without elaborating on how this financial support would come about.

Since the October coup, Sudan has been hurtling toward economic collapse, with prices for basic goods hitting record highs and billions of dollars in foreign assistance promised during the transition being cut off. In early March, Sudan’s central bank also liberalized exchange rates, which, coupled with the country’s low foreign exchange reserves, led to a sharp devaluation of the Sudanese pound against the US dollar, added unprecedented stress on the currency and left banks in an even more vulnerable position than they already were.

“It is obvious that Burhan is looking for money because the economy is deteriorating every day. He is going to the Emirates to ask for financial support, with a delegation that included Minister of Finance Jibril Ibrahim,” Mashamoun said. “During the final days of Bashir, whenever there was economic worry, he used to travel to Qatar or to Saudi Arabia, as a late thing, to ask for funding. That is why, in a way, the history of Sudan is repeating itself.”

In addition to bank assistance, Sadiq announced that Khartoum and Abu Dhabi agreed to establish “huge strategic economic partnerships” in the fields of roads, railways and ports, and to increase military cooperation. Prince Mohammed expressed his desire to build strategic partnerships with Khartoum and establish projects in Sudan that help boost the country’s economy. During their trip, the delegation led by Burhan met as well with leaders of the Sudanese community in the UAE to explore ways in which workers in the Gulf country can contribute to supporting the national economy in Sudan.

Among the above, the aspect that has sparked the most controversy in Sudan was that related to ports. In the past, the Emirati multinational logistics company DP World showed interest in the strategic port of Port Sudan, a city in eastern Sudan and the capital of the Red Sea state. Now, the announcement of a partnership in the port sector with Abu Dhabi has generated concern about possible privatization, especially among port workers who have pointed out that Emirati ports are direct competitors of those in the Red Sea.

These rumors have coincided with a visit to Port Sudan by Vice President of the contested Sovereign Council and leader of the ruthless Rapid Support Forces Mohamed Hamdan Dagalo (Hemedti), who is also very close to Abu Dhabi. Unrest in the city and among port workers even forced Hemedti to deny the privatization of the ports, something the contested Sovereign Council has also done on two occasions in the last few days.

Journalist Sara Elareifi captured a telling scene in which the Red Sea governor told port workers gathered around him that Hemedti had assured him he would not accept the ports being run by any foreign country, including the UAE. Yet at that moment, Hemedti — who was standing next to him — interrupted the governor and made it clear that he had not referred to any country when he had addressed rumors about the privatization of the port.

Burhan’s trip to the UAE came just days after Hemedti’s visit to Russia, where he discussed expanding Khartoum’s political, economic and security ties with Moscow. Hemedti also said at the time that Sudan’s military junta remains open to the possibility of moving forward with a deal to allow Russia to establish a naval base on the Red Sea.