As the world's attention shifts to Russia’s escalation against Ukraine, a delegation of high-level Sudanese officials headed by the deputy leader of the country’s military-led ruling council held talks in Moscow. 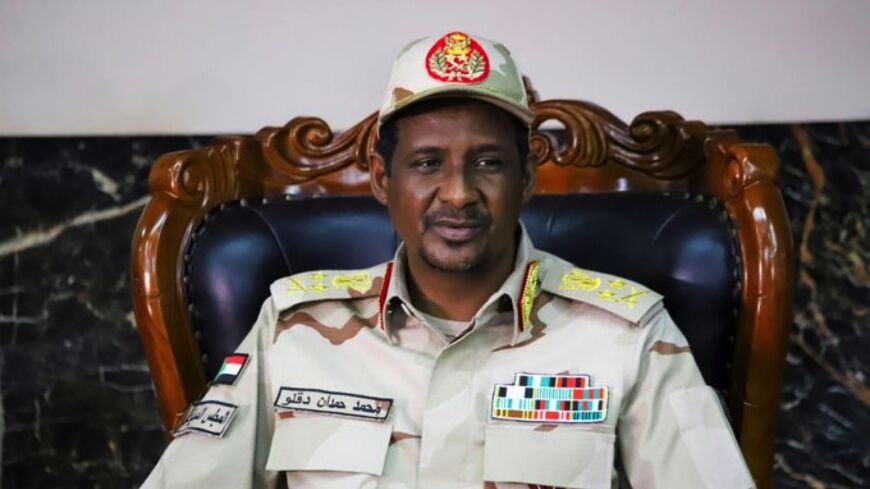 The deputy head of Sudan's ruling council, Gen. Mohamed Hamdan Dagalo, visited Moscow Feb. 23, as the political crisis in Sudan drags on after a coup orchestrated by the army toppled the civilian-led government.

Dagalo, also known as Hemedti, leads the powerful paramilitary Rapid Support Forces. He stands accused of widespread abuses in Sudan and was the main actor in the military coup carried out by army leaders Oct. 25, 2021, which drew broad international condemnation. Sudan has since fallen into a spiral of severe political and economic turmoil.

This visit to Moscow is the latest in a series of diplomatic trips made by Hemedti this year, which include visits to the United Arab Emirates (UAE), Ethiopia and South Sudan.

During his meeting with Russian Foreign Minister Sergey Lavrov Feb. 24, Hemedti stressed that his country is determined to advance relations with Moscow and strengthen bilateral cooperation in the political, diplomatic, economic and trade fields.

Lavrov stressed the depth of Russian-Sudanese relations. According to a statement by the Sudanese Sovereignty Council, Lavrov said his country is aware of the importance of the current developments in Sudan and is convinced of the Sudanese's ability to solve their problems, calling for noninterference in Sudan's affairs.

Lavrov also expressed his country's keenness to boost cooperation with Sudan in the fields of energy, agriculture, mining and environmental protection, affirming the readiness of Russian companies to start investment operations in Sudan.

Sudan has relied for years on Russia in the military and economic fields, most notably in mining, and especially during the period from 1993 to 2020 when the country was listed by the United States as a state sponsor of terrorism. The US measure isolated Sudan internationally for years and deprived it of the financial aid it desperately needed.

But things seemed to be going in the right direction after the formation of a government led by both civilian and military transitional authorities following the overthrow of the Omar al-Bashir regime in April 2019, with Western pledges to help Sudan pay off its outstanding debts.

However, when the army commander and head of the Sovereign Council, Gen. Abdel Fattah al-Burhan, overthrew the civilian partners in government and seized power, the country was brought back to square one, while the vital international aid to the country is now at stake.

The coup led to the suspension of $700 million in US financial aid. The World Bank also stopped disbursing any amounts for all operations in Sudan, which are estimated to be $2 billion. The United States, in coordination with other Western countries, has pledged to impose sanctions on the military leaders to push them to stop suppressing dissent and restore the civilian government.

Cameron Hudson, a former US State Department official and Sudan expert at the Atlantic Council’s Africa Center, told Al-Monitor that Sudan’s junta clearly hopes Hemedti’s visit will extract financial support from Russia to prop up the country’s failing economy and serve as a threat to the West that — unless it restarts lending and holds off on sanctions — Sudan will throw its lot into the Russian orbit.

“Russia can provide political protection for the junta internationally. That might not be worth anything to the Sudanese people, but it is worth something to the junta leaders,” Hudson said.

Russia, which has yet to issue a condemnation of the coup, was expected to send a wheat shipment to Sudan as humanitarian aid, Sputnik News reported in January.

Hemedti's visit comes at a very sensitive time for both countries. Russia faces sweeping Western sanctions for ordering its forces to invade Ukraine, while the United States has threatened Sudan's military with sanctions against the backdrop of the coup that derailed the country's democratic transition.

Hemedti rushed Feb. 21 to express his support for Russia's escalation in eastern Ukraine after Russian President Vladimir Putin recognized as “independent” the eastern regions of Donetsk and Luhansk under the control of pro-Moscow separatists. This recognition drew widespread international condemnation from the United States and its European allies.

Upon his arrival in Moscow, Hemedti said, “Russia has the right to defend its citizens and protect its people. This is a right guaranteed by law and the constitution.” He further urged giving priority to diplomacy to end the crisis.

Later, the Sudanese Embassy in Moscow issued a statement saying Dagalo's statements were taken out of context.

Gerrit Kurtz, a research fellow at the German Institute for International and Security Affairs, told Al-Monitor that Hemedti’s expressed support for Russia’s actions against Ukraine should be read with Russia’s previous support for him and his interests in mind.

Kurtz said that Hemedti and the Rapid Support Forces have benefited from cooperation with Russia before, including for contracts on mineral extraction, communications support and security cooperation, not to mention Russia's position toward the coup.

Amid widespread international condemnation of the coup in Sudan, Russia called for restraint and its officials avoided describing what happened as a coup. Rather, First Deputy Permanent Representative of the Permanent Mission of Russia to the UN Dmitry Polyanskiy accused the Sudanese protesters of committing acts of violence the day after the coup, justifying the use of force by Sudanese security forces to suppress protesters.

Later, this same position was echoed at the UN Security Council when Russia vetoed a draft resolution condemning the coup.

On another note, Facebook last year also deleted accounts it claimed sought to bolster Hemedti's influence and had links to the Russian Internet Research Agency known as Glavset, which is accused of interfering in the 2016 US election.

"Hemedti's political statements in support of Russia are a rather small price to pay for all the support he has benefited from so far,” said Kurtz.

In the meantime, Sudanese protesters are taking to the streets regularly to demand army leaders hand over power to civilians, release political detainees and hold accountable those responsible for the killing of protesters during the protests.

Medics allied with pro-democracy groups say more than 80 people have died in clashes with security services since the coup.

Security forces recently ramped up their campaign of arrests against politicians and activists who oppose military rule. Reports indicate that more than 100 people have been arrested because of their political positions.

It seems clear that the Sudanese military is not willing to relinquish power; instead, it appears to be seeking international backers to be able to counter mounting domestic and international pressure.

Shortly after the coup, Burhan expressed his support for an agreement with Russia to establish a naval base in Port Sudan on the Red Sea coast, but the agreement remains under review by the Sudanese side.

“The military and security forces will keep their own economic and security interests in mind when making their decision. Their October coup has made them more dependent on partners like Russia and therefore more likely to agree to the establishment of the naval base,” Kurtz says.

The agreement allows the Russian Navy to keep up to four ships at a time at the base, including nuclear-powered ships. The base can host a maximum of 300 soldiers and civilians.

Hudson said that this is not just a naval presence on the Red Sea. It’s the substantial advancement of Russia's strategy to regain relevance across Africa and the Middle East, he says.

“What Russians are attempting to accomplish in Sudan is strategic, not tactical, and should not be divorced from their efforts in Mali, Libya or Syria. Sudan allows them to connect all those dots,” he added.