Sudan's military leaders have expanded ties with Russia since the invasion of Ukraine. 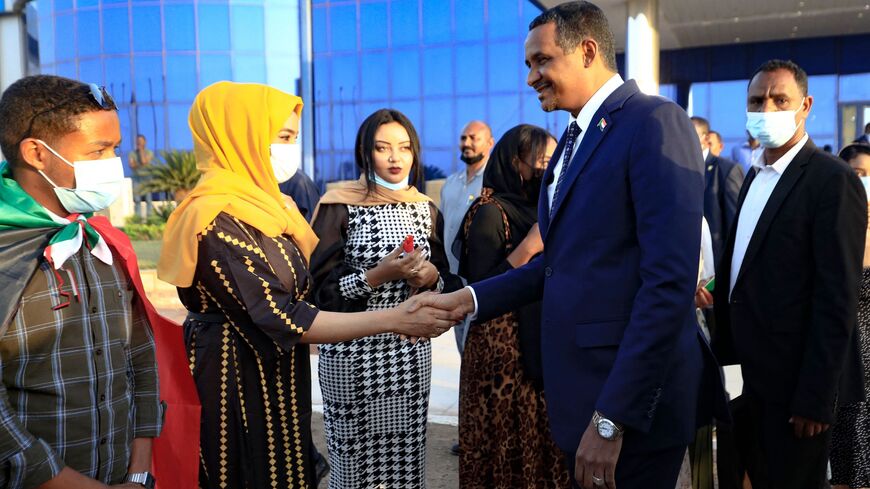 Sudan's military leader Mohamed Hamdan Dagalo (Hemedti) is greeted upon his return from the Russian capital, Moscow, at the airport in Khartoum, on March 2, 2022. - ASHRAF SHAZLY/AFP via Getty Images

On March 21, the US charge d’affaires and the ambassadors of the United Kingdom and Norway in Khartoum issued an unusually strongly worded statement criticizing Russia’s presence in Sudan to mark the first month of the invasion of Ukraine. In particular, the diplomats, known as the Troika, condemned the activities in Sudan of the Wagner Group, a shadowy private military company close to the Kremlin, and deemed it a local example of the global threat that in their view Moscow poses to the country and the continent.

In their joint statement, the Western diplomats specifically accused the Russian contractor of being involved in illicit activities in Sudan connected to gold mining and in spreading disinformation on social media — actions that they consider to be undermining the respect for the rule of law and good governance that the Sudanese people have been fighting for since the onset of the 2018 Revolution. The diplomats acknowledged that Khartoum has the sovereign right to decide on its own its foreign relations, but they warned that they will keep supporting the Sudanese people “as they strive to fulfill [their] aspirations.”

The message, condemned by the Foreign Ministry of the contested Sudanese government, shows that relations between Moscow and Khartoum, which have strengthened since last October’s military coup, and the presence of the Wagner Group in the country have again come under the West’s spotlight as they try to isolate Russia following the invasion of Ukraine and at the same time keep up the pressure on the Sudanese generals.

“One of the impacts of the Russian invasion of Ukraine is that Russian activities around the world are now under greater scrutiny. [And] it has been the worst kept secret in Sudan that Wagner operatives were working here and supporting the military,” Kholood Khair, managing partner of Insight Strategy Partners in Khartoum, told Al-Monitor. “It’s just a function of greater oversight from the international community on how close the [Sudanese] military is to Russia and what that could mean for this region but also what it could mean in terms of strengthening Russia vis-a-vis its activities in Europe,” she added.

Despite the Foreign Ministry's denials, the presence in Sudan of the Wagner Group, which often aligns with the Kremlin’s foreign policy goals, has been extensively documented in recent years. During much of the era of former dictator Omar al-Bashir, Khartoum and Moscow maintained significant economic and military ties. But it was following a summit between Bashir and Russian President Vladimir Putin in Sochi in 2017 that the relationship between the regimes of the two countries entered a new phase. In that trip, Bashir famously said that “Sudan may become Russia’s key to Africa.”

At that meeting, the two parties added content to their messages and sealed a number of important agreements. These included a lucrative concession to explore gold-mining sites in Sudan to M Invest, a Russia-based entity that the US Treasury considered a cover for Wagner forces controlled by Yevgeny Prigozhin, an oligarch with close ties to Putin linked to the Russian contractor. In Sochi, Bashir and Putin also discussed what is still considered one of Moscow’s main aspirations in Sudan: a naval base on the Red Sea.

Following these agreements, Wagner forces with fighting experience in countries like Syria and Ukraine began arriving in Sudan, initially to protect its mining exploration sites and other economic interests. One of the first to publicly acknowledge this flow to Sudan was then Minister of Defense of the Donetsk People’s Republic Igor Strelkov in 2017.

Shortly thereafter, the Russian contractor began to provide other political and military assistance to the Bashir regime. M Invest, which mainly relied on the ground upon its subsidiary Meroe Gold, was responsible for developing plans to suppress large-scale pro-democracy protests and launch disinformation campaigns on social media in 2018 and 2019, the US Treasury found. A contingent of about 500 forces was also deployed in Darfur to conduct military training for Sudanese soldiers, Radio Dabanga wrote in 2018.

In January 2019, when the protests that ultimately forced Bashir’s downfall had already erupted, Russia’s Foreign Ministry admitted for the first time that Russian companies were operating in Sudan. And leaked documents revealed that Russian nationals, among them Prigozhin, had designed a political and economic plan to keep Bashir in power.

It was during all this process that the Wagner Group forged close ties with an increasingly powerful actor in Sudan: the Rapid Support Forces (RSF), a paramilitary group accused of systematic abuses across the country, but particularly in Darfur, and led by Mohamed Hamdan Dagalo. Today, Dagalo, better known as Hemedti, is the deputy chairman of the contested Sovereign Council ruling Sudan and is considered the country’s real strongman.

The involvement of both shadowy groups in the extraction and smuggling of Sudan’s gold, which has generated wide condemnation from the West, has reportedly contributed to building up gold reserves in the Central Bank of Russia, a resource that can now prove key for Moscow to face the set of sanctions imposed as a result of the invasion of Ukraine.

“Wagner can often fulfill the roles that the Russian state was not willing to cross, whether it came to intervening directly in pro-government repression on the ground, building these [kinds of] economic relationships, getting these direct resources that perhaps the Russian government would have a bit of a harder time doing. In a lot of ways, doing the dirty work,” Raphael Parens, an independent security researcher who has recently published a study on the Russian contractor’s presence in Africa, told Al-Monitor.

Since Bashir’s ouster in April 2019, and during the fragile period of democratic transition that ended abruptly with last October’s military coup, the Wagner Group’s operations in Sudan became more elusive. The group tried to stay out of the public spotlight and work mostly with the RSF. Yet in this period, its involvement in disinformation campaigns on social media was also uncovered, and the group was widely seen as a destabilizing force.

This more cautious approach on the part of Russia ended following the military coup in October, and the Kremlin has since openly emerged as one of the main foreign allies of the generals who seized power. Moscow’s first reaction after the military takeover was to deny that a coup had taken place at all and call for an end to foreign interference.

This good relationship between the two sides was publicly displayed at the end of March, when Hemedti traveled to Moscow on an eight-day visit during which the paramilitary leader held meetings with senior Russian officials, including Foreign Minister Sergey Lavrov, to bolster ties with the country. Remarkably, it was Hemedti and not Abdel Fattah al-Burhan, head of the contested Sovereign Council, nor Sudan’s acting foreign minister, Ali Al Sadiq, who headed the trip, widely publicized in the RSF’s official channels.

Chairman of the Foreign Affairs Committee in the US House of Representatives Gregory Meeks reacted to the trip with a tweet in which he noted that “Sudan sending a delegation to Russia as it launches an invasion in Ukraine sends an undeniable message to the world.” He added: “We are watching.” The European Union, on its part, sent the ambassadors of all its member states in Khartoum to meet Sudan’s foreign minister.

This close relationship between the regimes of the two increasingly isolated countries has also recently led to a top US lobbying firm, Nelson Mullins Riley & Scarborough, dropping the Sudanese government as a client citing the general’s close ties to Russia and their failure to denounce Moscow’s invasion of Ukraine, according to The Africa Report.

Yet following his weeklong visit to Moscow, Hemedti said that Sudan remains open to the possibility of moving forward with the paused deal to allow Russia to establish a naval base on the Red Sea. And on March 2, Sudan was one of the few countries to abstain during the vote in condemnation of Ukraine’s invasion held at the UN General Assembly.

“While all this has been known to be going on, the international community has been trying to find leverage with the generals,” Khair said. “Obviously, that hasn’t worked out, and the closeness with Russia has sound alarm bells, particularly as it pertains to Russian’s increasingly likelihood of securing the naval base,” she added, noting that “now that the military and all its security arms, including the RSF, are very much in power, that likelihood increased.”