Russia-Sudan ties have deepened since the October 2021 military takeover in Sudan and the Russia-Ukraine war. 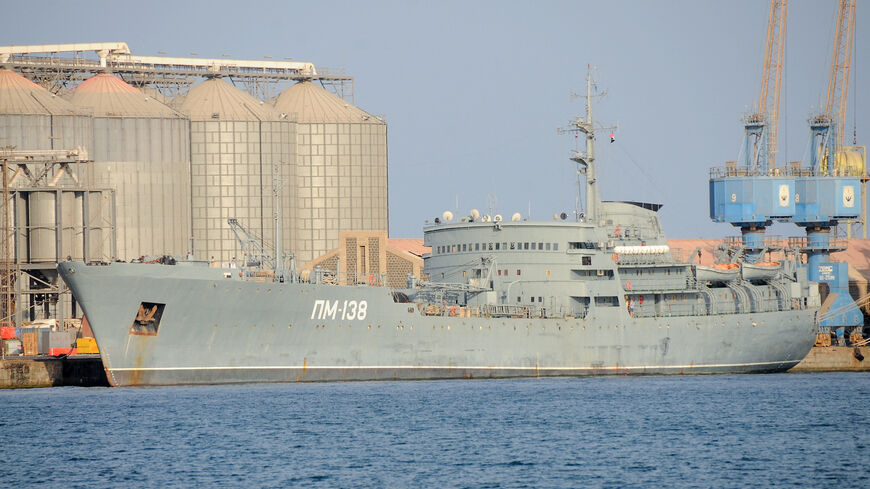 This picture taken on May 2, 2021, shows a view of the Amur-class Russian navy repair ship PM-138 docked at the port of the Sudanese city of Port Sudan. - IBRAHIM ISHAQ/AFP via Getty Images

On July 31, 2022, Russian President Vladimir Putin signed a decree approving the country's new Maritime Doctrine. This conceptual document redefines the goals and objectives of maritime policy, emphasizes the oceanic purpose of the Russian navy and strengthens the confrontation with the United States and NATO. The previous version was approved in 2015 and reflected changes in maritime policy after the annexation of Crimea.

The new doctrine emphasizes the need for economic development of the ocean space, states the problem of the underdeveloped Russian merchant and scientific fleet, and specifies a number of tasks for more competitive competition. In particular, the document, for the first time in the 30 years since the collapse of the Soviet Union, envisions the possibility of building modern aircraft-carrying warships, as well as creating basing infrastructure in the Red Sea and the Indian Ocean and expanding cooperation with Iran, Iraq and Saudi Arabia.

With the exception of the Syrian port of Tartus, the only real foreign maritime facility where Russia really intended to have a serious presence was Port Sudan. The relevant agreements had been reached under Omar al-Bashir but were made public after the 2019 military coup during a so-called transitional period without the possibility of early ratification of the document by the new authorities. However, in April 2021, the Sovereign Council of Sudan suspended the agreement with Russia to create a logistics center. This happened at a time when the Russian military had already started to deliver military equipment there.

The freezing of the agreement occurred primarily because of the emerging thaw in relations between Khartoum and Washington and the desire of the Sudanese military to obtain better economic guarantees from Moscow. Thus, after the US State Department removed Sudan from its list of sponsors of terrorism in late 2020, it stepped up its efforts to find investors.

For example, the United Arab Emirates has expressed a desire to invest in Darfur, Qatar has offered Khartoum the creation of an investment zone and Saudi Arabia has begun to explore investment in agriculture.

The specifics of the agreement apparently played an important role in Khartoum's decision to delay the deployment of Russian military infrastructure. Preparation of a military deal on behalf of the Russian Defense Ministry for a long time was carried out by the people of odious Russian businessman Yevgeny Prigozhin, who is behind the mercenaries of PMC Wagner, and only then the military department got involved in the process.

Although the Russian military has visited Khartoum more than once in the last two years, according to Al-Monitor sources close to Russian diplomatic circles, the crude nature of the deal and the involvement of mercenaries always made itself felt as soon as the officials left Sudan.

After the second coup in 2021, Khartoum was once again isolated. Because of dissatisfaction with the actions of the military, which took power away from the transitional government, not only the United States but also the European Union and the World Bank froze financial aid to Sudan.

The outbreak of war in Ukraine caught Sudan's No. 2 military commander, Mohamed Hamdan Daglo, also known as Hemedti, in Moscow. During his visit, he stated that Sudan "has no problem" with the possibility of Russia opening a naval base on its coast, provided it does not pose a threat to national security.

Apparently, the Sudanese military has once again become positive about the prospects of the Russian military logistics center, since they are under serious international pressure as Western structures demand that they adopt the constitutional declaration signed with civilian political forces from the Forces for Freedom and Change (FFC).

Against the backdrop of the ongoing war in Ukraine, another round of talks about the Russian presence in the Red Sea is a predictable argument for political bargaining. All the more so when inflation in Sudan exceeds 200% and the prices of imported staples, such as wheat and fuel, have risen more than 30% since January 2020.

However, according to sources at The New Arab, the greatest concern about the return of the Sudanese military to the rhetoric of rapprochement with the Kremlin was expressed not even by the West, but by Egypt. Cairo now has quite a lot of influence in Khartoum and, despite the development of relations with Moscow, is against the establishment of official Russian military facilities near its borders and zones of interest. A stable Sudan is primarily in the interests of Egypt, which, on the one hand, fears that instability in Sudan could cause a surge of Sudanese immigrants, a strengthening of the local Muslim Brotherhood and conflict on its southern border. On the other hand, Khartoum, together with Cairo, opposes Ethiopia's project to build Africa's largest hydroelectric power plant (Grand Ethiopian Renaissance Dam), which has become the subject of a dispute between the three countries.

In addition, despite the freezing of the agreement on the official military presence, mercenaries from the Wagner PMC have long used Sudan to smuggle gold as part of the fight against international sanctions. The mined, unaccounted-for gold is either flown out of Khartoum or transported by car to the Central African Republic, where Russian mercenaries have the largest presence on the African continent.

According to a CNN investigation, back in 2021, Russian Ambassador to Sudan Vladimir Zheltov held a meeting with local mining officials and called for Meroe Gold, a company close to PMC Wagner, to be made less visible to American authorities.

Daglo and Sudan's coup leader, Gen. Abdel Fattah al-Burhan, as CNN journalists note, have "strong ties with the Russian PMC Wagner," but whether their tandem is ready to give Moscow official access to the Red Sea coast is still a big question, especially at a time when Russia's economic opportunities have shrunk dramatically due to the numerous sanctions imposed after the invasion of Ukraine.

In July 2022, Foreign Policy, citing US intelligence officials, reported that Russia's hopes of obtaining a base on the Red Sea eventually collapsed, and Moscow will have to look for other options in the region to establish strongholds.

Does Moscow have any other realistic options? Theoretically, Russia could resume negotiations with Somaliland, especially since there was once a Soviet military base in Berbera, which the USSR abandoned because it supported Ethiopia in the Ethiopian-Somali conflict. But if the problem of relations with the various clans could hypothetically be solved by Russia through the same structures of PMC Wagner, the question of official recognition of the legal status of Somaliland is unlikely to be resolved without a new round of regional diplomatic scandals.

Therefore, Sudan, despite all the difficulties, remains from the Kremlin's point of view the most preferable country for a military presence, especially since Khartoum and Moscow have also established a diplomatic dialogue. On Aug. 3, 2022, Sudan's Deputy Foreign Minister Dafa'alla al-Hajj Ali and Russian Deputy Foreign Minister Mikhail Bogdanov held regular talks in Moscow, focusing on trade and economic cooperation.

There have been constant protests against military rule in Sudan, but Burhan, despite his increasingly conciliatory rhetoric, has a de facto military monopoly on political power, so he can strike a deal to establish a technocratic government without the constitutionally required approval of disparate political factions and expel the UN mission from the country.

This will obviously cause a further rift between Sudan and the West, and the Sudanese military may decide that the existing support from the UAE and Egypt will help them compensate to some extent for the loss of Western aid. Then Russia can take advantage of the situation, especially since it has gained great experience in Syria in simulating negotiations on a transitional government against the backdrop of an increased military presence.