Sudan's military coup could hurry along the process of Russia's deeper military involvement in the country. 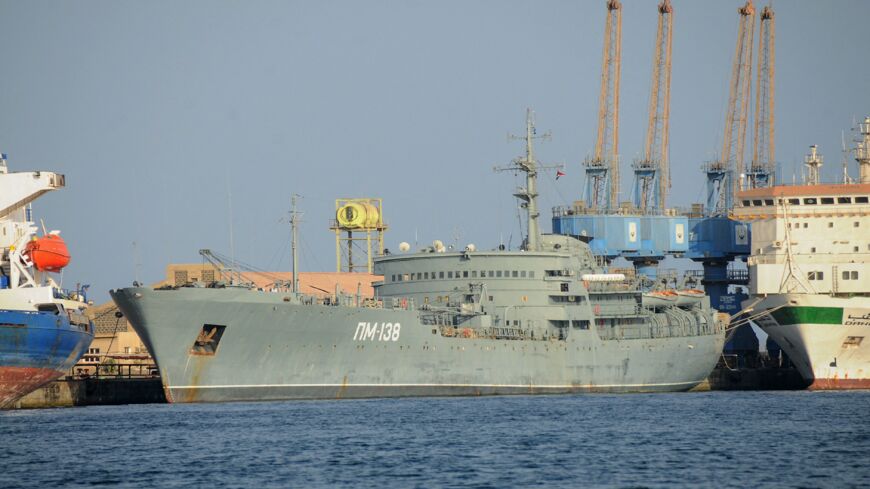 This picture taken on May 2, 2021, shows a view of the Amur-class Russian navy repair ship PM-138 docked at the port of the Sudanese city of Port Sudan. - IBRAHIM ISHAQ/AFP via Getty Images

The Sudanese military detained the country's prime minister, Abdalla Hamdok, on Monday along with several other members of the government. Lt. Gen. Abdel Fattah al-Burhan, who led the coup and alongside Hamdok headed the transitional military-civilian government, announced on state television the introduction of a state of emergency in the country and the dissolution of the country’s so-called Transitional Sovereign Council and the government. As protests erupted in Khartoum and world capitals condemned the coup, the events in Sudan were greeted with restrained optimism in Moscow. Russian officials to this point have refrained from recognizing the change of power in Khartoum as a military coup.

“It's hard to say if this is a coup or not. The term ‘coup’ has a specific definition. There are situations like [that of Sudan] in many parts of the world that are not called a coup. This is sometimes called a change of power. … It is up to the Sudanese people to decide whether it is a coup or not," First Deputy Permanent Representative of Russia to the UN Dmitry Polyanskiy told reporters on Tuesday before the UN Security Council’s discussion of the situation in Sudan.

Polyanskiy went as far as to justify the use of force by the Sudanese security forces to suppress protests in the country, claiming that those protesting against the change of power were themselves using violence.

“As far as I can see, there are not only peaceful protests but [also] violent protests,” he said.

In turn, Russian Foreign Minister Sergey Lavrov hinted that the change of power in Khartoum resulted from the Sudanese disagreeing with the political course that was “imposed” on Sudan by the United States and Western countries.

“Approaches to how the Sudanese should build democracy in its Western understanding were imposed; shock reforms were imposed. The reaction was the opposite. The socioeconomic situation of the population has sharply deteriorated, [there is widespread] unemployment, and the traditional structure of Sudanese society is under serious stress,” Lavrov added.

From these reactions, it becomes clear that Moscow is interested in maintaining a military regime in power in the country, which is likely to show much greater interest in developing cooperation with the Russian Federation than the previous government. The latter, in Moscow’s view, had acted with an eye on Washington and Western countries that did not support the military.

In particular, the military regime may speed up the process of creating a Russian naval base in Sudan that has been in the works for years.

An agreement on military cooperation between Russia and Sudan was signed in May 2019 after the military overthrew President Omar al-Bashir in April of the same year. An agreement on the creation of a Russian base was then concluded with the interim military government in 2020.

The former government of the country that was overthrown by the military had put forward new conditions on Moscow, dragging out the question of whether the Russian naval base could be opened. Moscow viewed such a change in Khartoum's approaches as resulting, among other things, from Washington's reluctance to see Russian military facilities in this African state. Now, the situation has changed dramatically.

The country's military government, finding itself under sanctions pressure from the United States, will seek new footholds — namely, Russia and China. And the Russian military base will come in handy more than ever and can be used as a factor that will prevent a hypothetical external intervention in Sudan in order to prevent the military regime from remaining in power.

“We proceed from the fact that it is necessary to stop any interference in the internal affairs of this country. The Sudanese people must determine their own destiny. We hope that all those who are now trying to resist this principle realize their responsibility in order to prevent another hotbed of destabilization on the long-suffering African continent,” the Russian foreign minister said.

In addition, the deterioration of relations between Khartoum and Washington against the backdrop of a military coup may open additional prospects for Russian non-state actors to work in Sudan. One potential winner in this scenario is Russian private military companies (PMCs), whose activities may again be in demand for the military government in Khartoum.

The appearance in Sudan of a Russian PMC known as the Wagner Group dates back to the period before the Sudanese Revolution in December 2018. Around the time these massive protests in opposition to Bashir broke out, Wagner contractors were first seen on the streets of Khartoum. In January 2019, The Times published photographs of men, presumably Russian mercenaries, who were transported through Khartoum in a Ural-4320 truck, which is widely used by the Russian military and Russian PMCs. Back in late July 2018, there were reports of a group of 500 Russian private military contractors operating in Sudan’s South Darfur state in a camp about 15 kilometers south of Um Dafug, near the border with the Central African Republic (CAR).

It is reported that the fighters of Russian PMCs spent five months in the area training not only Sudanese troops there, but also fighters from the neighboring CAR. Perhaps the emergence of the Wagner Group in Sudan happened immediately after the signing of an agreement in 2017 between M Invest — associated with Yevgeny Prigozhin who, according to some sources, is the curator of the activities of Russian PMCs — and the Sudanese government for gold mining in this country.

At the same time, Russian interests in Sudan are not limited to the activities of these structures. In particular, the Russian company Rosgeologia signed a contract in September 2021 to search for gold deposits in Sudan. Also, back in 2017, Russia and Sudan signed an agreement on cooperation in the use of atomic energy for peaceful purposes, as well as an agreement on the development of a project for the construction of a nuclear power plant in Sudan. There have been Russian deals on construction in Sudan, including a floating nuclear power plant and a major nuclear power plant with a capacity of 1.2 thousand megawatts. Khartoum is also reportedly interested in purchasing new batches of weapons from Russia.

At the same time, African-focused political scientist and associate professor of Moscow State University Natalia Piskunova told Russian newspaper Gazeta.ru that the initiators of the military coup should remain in power since Sudan as a whole is characterized by a situation where leaders come to power by military means and then quickly lose power. Only when it becomes clear that the military government is capable of retaining power, she said, can Moscow then renegotiate some agreements.

“The fate of Russian projects, including the development of uranium deposits or the construction of a naval base, will be decided within six months at least. This is such a minimum period for Moscow to understand whether the military will now hold on to power or not. I would say that we have to wait for the time,” Piskunova added.