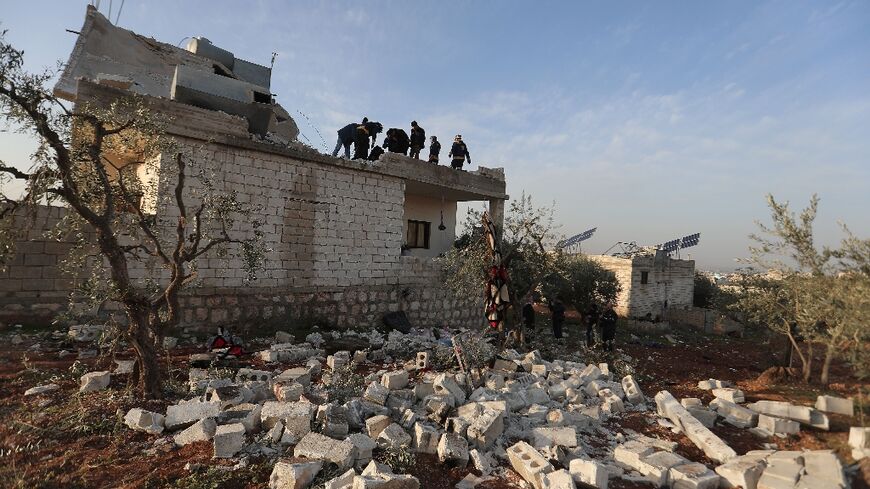 US President Joe Biden announced last week that IS leader Abu Ibrahim al-Hashimi al-Qurashi blew himself up during an American raid on his hideout in Syria - Aaref WATAD
by Didier LAURAS
February 10, 2022 — Paris (AFP)

Hoping to further destabilise the Islamic State group following its leader's death, US officials have turned their focus to an architect of the insurgents' bloody revival in Afghanistan since losing their "caliphate" in Syria.

Most recently he is thought to have organised a deadly assault on the Kabul airport last August as US troops staged a chaotic pullout after years of counterinsurgency efforts.

The US exit allowed a return to power of the Taliban, whom the even more hardline Islamic State accuses of failing to strictly apply Shariah law.

In recent years IS-K -- the name refers to a region encompassing swaths of Pakistan, Iran, Afghanistan and Central Asia -- has carried out dozens of deadly attacks under Ghafari's guidance.

"Ghafari is responsible for approving all (IS-K) operations throughout Afghanistan and arranging funding to conduct operations," the US State Department said this week in offering a $10 million reward for helping to find him.

The bounty was announced after US President Joe Biden said last week that IS leader Abu Ibrahim al-Hashimi al-Qurashi blew himself up during an American raid on his hideout in Syria, in a major blow to the group.

Little is known about Ghafari, thought to be born in 1994, reportedly in Afghanistan or Iraq, according to experts at the CounterExtremism Project.

An IS statement called him "an experienced military leader... one of the 'urban lions' of (IS-K) in Kabul who assisted in planning and carrying out guerrilla operations along with suicide and complex attacks," the New York-based CEP said in a recent report.

Ghafari's network has proven its capacity for deadly efficiency, targeting civilians at mosques, shrines, public squares and even hospitals.

The group claimed responsibility for 340 attacks last year after a "trough" in 2020, according to the Switzerland-based Jihad Analytics (JA), which focuses on the online communications and on-the-ground operations of extremist groups.

"In 2021, it recovered and succeeded in carrying out bloody attacks across a wider territory after the return of the Taliban," JA's founder Damien Ferre told AFP.

Besides the Kabul airport assault that left 185 people dead including 13 American soldiers, Ghafari is also believed to have orchestrated the sophisticated siege of the Jalalabad prison in Afghanistan in August 2020, which freed hundreds of IS fighters.

"His goal has been to guide the organisation out of this period of relative decline first by doubling down on sectarian attacks against vulnerable minorities and then by launching a revitalised war against the Afghan Taliban," analysts Amira Jadoon and Andrew Mines wrote in a report published by War on the Rocks, a US-based military affairs website.

At the same time, Ghafari has urged his lieutenants to provide welfare and other social services, bolstering his image as a capable leader.

"IS-K will be able to further undermine the Taliban's position of power by engaging in inter-tribal diplomacy and winning over the local population that is disgruntled with a Taliban government," according to Asif Fuard, a security researcher at the General Sir John Kotelawala Defence University in Sri Lanka.

Ghafari is also reported to be looking to extend beyond Afghanistan, according to the CEP, enjoying close ties with IS's top leaders.

He has been named chief of its Al-Sadiq branch, which covers Afghanistan, Pakistan and Central Asian states as well as Bangladesh, India, Sri Lanka and the Maldives.

His momentum could attract additional IS recruits from around the world, bolstering IS-K numbers currently estimated at some 4,000 fighters, according to a United Nations experts panel.

"The high-profile suicide terror attacks of the IS-K... and the Taliban's failure to maintain control of their borders could turn Afghanistan into another hot spot for ISIS's followers from the Middle East, South and Central Asia," Uran Botobekov, an expert on jihadism, wrote in a recent report for the Modern Diplomacy website.