Israel straddles ties with US, Russia over Ukraine

Israel has made it clear that if it is forced to pick sides between the United States and Russia, it will have to pick the Americans. 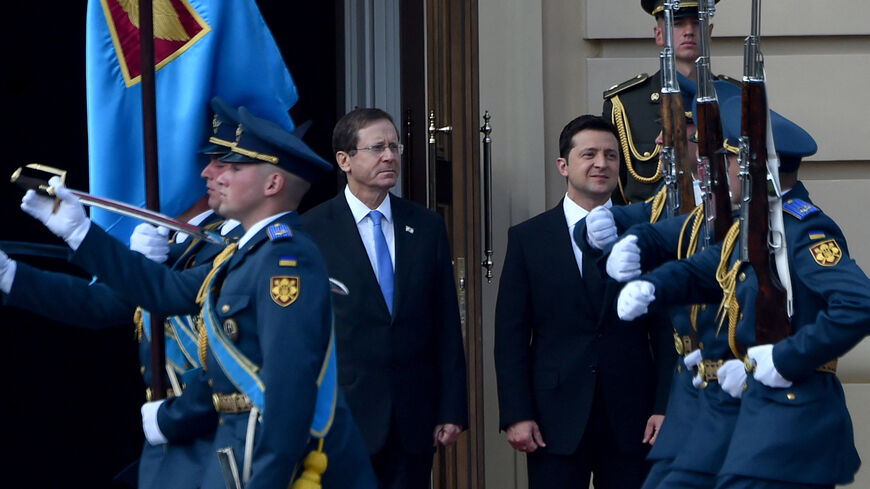 Ukrainian President Volodymyr Zelenskyy (R) and his Israeli counterpart Isaac Herzog (C) review an honor guard ahead of their meeting at Mariinskyi Palace in Kiev on Oct. 5, 2021. - SERGEI SUPINSKY/AFP via Getty Images

“We will not say so explicitly, and we will not do anything that we don’t have to … but it is clear to us and the Russians that if we have to choose, our choice will be clear: Israel is on the side of the United States of America,” a senior Israeli source who asked not to identified told Al-Monitor.

His comment makes it clear that in a face-off between Russia and Ukraine, Israel would take Russia’s side, but when it comes to Russia and the United States, Israel will be forced to side with the United States despite its vested interest in security cooperation with President Vladimir Putin, whose troops cast a dark shadow over Israel’s northern front.

Foreign Minister Yair Lapid, who explained during a television interview this week that Israel would “weigh its steps when the time comes,” found himself in trouble when the headlines that followed read that if the United States imposes sanctions on Russia, Israel would consider joining in.

Israel has worked to control the verbal escalation, but an increasing number of Israeli officials have admitted the truth that everyone from Putin in Moscow to President Joe Biden in Washington knows: Israel is on Washington’s side.

“It’s like a kid who watches his parents fighting,” a senior diplomatic source in Jerusalem told Al-Monitor on condition of anonymity. “That child is completely dependent on one of them. He knows that he will support that parent, but fears the wrath of the other one.” Putin is the most pro-Israel leader ever to sit in the Kremlin, as former Israeli Prime Minister Ehud Barak put it in a Feb. 22 interview with N12 news.

Israel has stepped up its operations against Iran and its various regional proxies in recent months. The reemerging nuclear agreement with Iran means that it must continue its campaign against Iran on its own. The keys to success lie in Putin’s pocket, with Russian forces deployed in Syria on Israel’s northeastern border. In recent weeks, Putin has taken several measures that bode ill for Israel’s freedom to act against Iranian entrenchment in Syria and Lebanon, including a Jan. 24 joint aerial patrol by Russian and Syrian military jets along Israel’s Golan Heights border.

Officials in Jerusalem took Moscow's moves as a warning that if Israel identifies too closely with the United States, it will pay a heavy price. Prime Minister Naftali Bennett led a security cabinet debate on the issue, and both Lapid and Defense Minister Benny Gantz are deeply engaged in it as well. Israel generally tries to distance itself from such dilemmas. In the UN vote on sanctioning Russia over its 2014 annexation of the Crimean Peninsula, for example, Israel abstained despite the anger in Washington. This time, the situation is more complex and dangerous.

At a recent cabinet meeting, two ministers who were born in the former Soviet Union were asked to assess the odds of a war between Russia and Ukraine. One of them, Ukraine-born Housing Minister Ze’ev Elkin, thought that Putin was serious and would invade. The other, perhaps Israel's top Putin expert, Moldova-born Finance Minister Avigdor Liberman, predicted the crisis would end without a full-blown war. Right now, Elkin’s assessment appears more likely, and the question is whether Israel can avoid collateral damage.

Meanwhile, Israel is telling Moscow that Ukraine is not Israel’s fight but if fighting should break out, Israel will have to side with the Americans. This stance was made clear Feb. 18 by the director general of Israel’s Foreign Ministry, Alon Ushpiz, to Deputy Russian Foreign Minister Mikhail Bogdanov and in a Feb. 15 conversation between Russian-born Israeli Minister of Tourism Yoel Razvozov and Russian Ambassador to Israel Anatoly Viktorov. However, Putin does not appear impressed.

It is important to remember that Israel also has a special relationship with Ukraine. While Ukraine does not have strategic importance for Jerusalem, its Jewish President Vladimir Zelenskyy is a known friend of Israel, his country is home to a sizable Jewish population and he has made it clear he expects Israel’s help in defending Ukraine's independence.

Last week, reports emerged that Ukraine had asked Israel to supply it with Iron Dome anti-missile defenses, but was turned down. The news was apparently inaccurate, as Israel does not yet have sufficient Iron Dome systems for its own defense. But what will Israel do if Ukraine asks for defense aid? Can Israel help Ukraine in its fight against the Russian forces that have sophisticated radar systems in Syria locked on every Israeli fighter jet that takes off in Syria’s direction?

One of the ideas raised in Jerusalem was to propose that the sides hold a summit under Israeli auspices in Jerusalem. Bennett broached the idea to Putin during their October 2021 meeting in Sochi several months ago. Jerusalem, Bennett told Putin, is close to both Kyiv and Moscow. Israel maintains close relations with both states and would be a good place for them to try to settle their differences.

Putin rejected the idea. He is not seeking a diplomatic solution but a significant achievement on the ground that he knows negotiations will not give him. Bennett will have to come up with a creative solution as he juggles competing Israeli interests vis-à-vis Russia, the United States and Ukraine.