On a first public visit to Manama, Defense Minister Benny Gantz signed a memorandum of understanding, formalizing the security relationship between Israel and Bahrain. 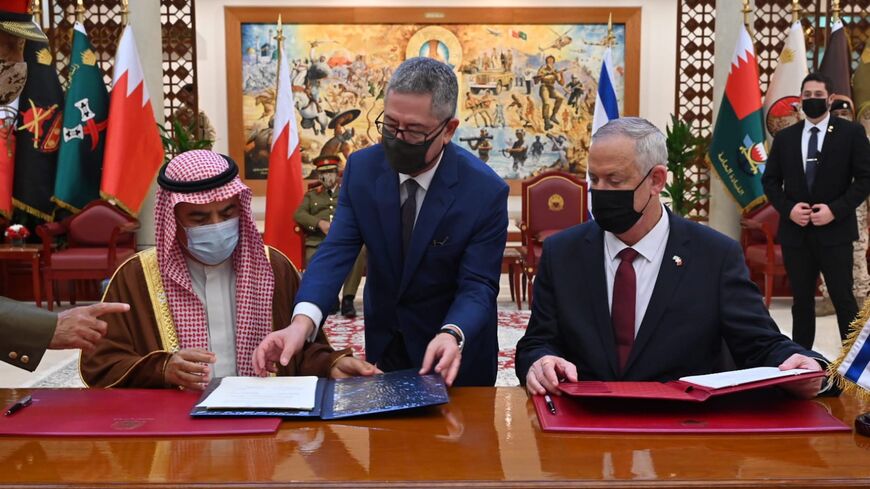 A statement issued by the office of Gantz said the agreement will help advance intelligence coordination, providing a framework for exercises and cooperation between the countries’ defense industries. Gantz said at the signing, “The strategic cooperation that we are bringing to a new high point today with the signing of this agreement and with the important meeting with the king is the continuation of the historic Abraham Accords and of the developing relationship between our nations and people. Only a year after the signing of the accords, we are already here signing a significant security agreement, which will allow robust cooperation and strengthen the security of both countries and of the entire region.”

After the ceremony, Gantz tweeted, “It is a great honor for me to be hosted by King of Bahrain Hamad bin Isa Al Khalifa and to sign a historic security cooperation agreement between the two countries with Defense Minister Abdullah Bin Hassan Al Nuaimi. Strengthening and cementing our bilateral ties will enable the expansion of intelligence, operational and industrial cooperation, amid the common challenges our two countries are facing.”

Bahrain is the second Arab country with which Israel has signed a memorandum of understanding for security cooperation. Gantz signed a similar agreement last November with Morocco.

Gantz arrived last night to Bahrain for a historic visit to the country. Upon arrival, the minister tweeted, “I just landed in Manama, Bahrain for an official visit to the Kingdom. I was welcomed by my Bahraini counterpart, Minister of Defense Affairs his excellency Sheikh Abdullah Bin Hassan Al Nuaimi in a remarkable ceremony. Honored to be here and looking forward to meeting the Kingdom’s leaders.”

Accompanied by IDF navy commander David Salama this morning, Gantz visited the US Navy’s 5th Fleet base in Bahrain. Hosted by VADM Brad Cooper and Gantz’ Bahrani counterpart, the Israeli minister hailed security ties between the three countries amid growing threats from Iran and on the backdrop of increased attacks by Yemen’s Iran-backed Houthi militia against the United Arab Emirates. Israeli-owned ships had been targeted in recent years by Iran's proxies, so ensuring safe passageway through the Red Sea and Persian Gulf is a major stake for Israel.

Speaking in front of the American warship USS Cole, Gantz said, “This [cooperation] is a security need of the first order in light of the growing challenges on the maritime front in particular and in the region in general.” He added, “The fact that we are able to land here, in an Israeli Air Force plane, and to visit with our partners, that the head of the Israeli navy can visit the 5th Fleet, and we can speak openly about meaningful defense issues about the security of the region, is a significant milestone.”

Gantz said, “We are willing to help, to take part in joint operational activities in order to ensure stability and so that our friends can continue to exist and to prosper securely, and we will also be better protected from the different threats facing us.”

Salama commented, “This is a historic visit by the Israeli navy to Bahrain and to the 5th Fleet," and said the ensuing collaborations "will bring safe passageway and a secure maritime area for the State of Israel for our partners in the US Central Command.”

Gantz’ visit came as the 5th Fleet launched its biennial International Maritime Exercise 2022, which includes some 60 countries. The Israeli navy is taking part in the drill, for the first time publicly joining Saudi Arabia and Oman, two counties it has no diplomatic relations with. US 5th Fleet spokesperson Tim Hawkins noted that the participating countries all knew who would be taking part in the exercise and were coming and working together toward the shared goal of safer seas.