Israel's Lapid visits Bahrain-based US warship in warning to Iran

The Iranian threat and the campaign against a new nuke deal came up all along the historic visit of Foreign Minister Yair Lapid in Bahrain. 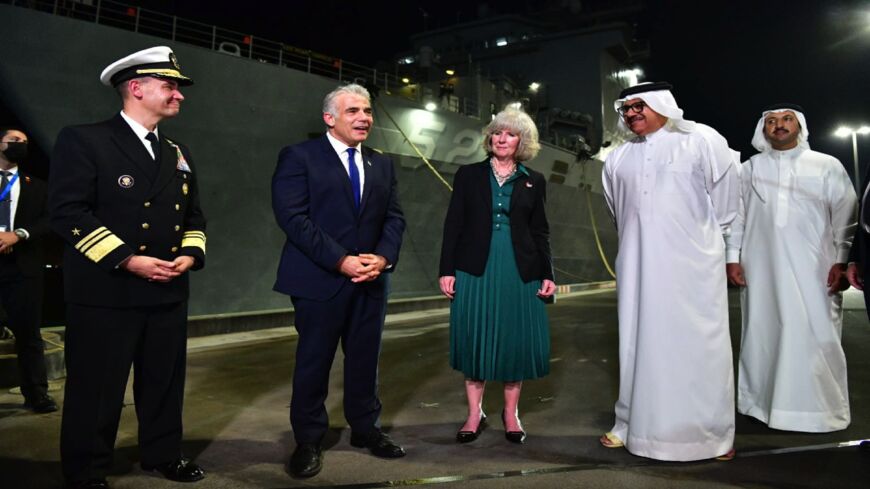 Iranian Foreign Ministry spokesman Saeed Khatibzadeh criticized this morning the Sept. 30 visit by Israel’s Foreign Minister Yair Lapid to Bahrain, stating that the trip had left a stain on the reputation of Bahraini rulers that “will not be erased.”

For Jerusalem, the irritated reaction by Tehran only proved the success of the visit and the emerging regional anti-Iran alliance the Israeli government has been nurturing for some time now. In fact, Lapid’s one-day trip to Manama seems to have been geared for this goal exactly: to demonstrate to Iran that Israel is not alone in its campaign against its nuclear program or in its campaign against a new nuke deal.

The issue of Iran and its regional influence was present at all stages of Lapid’s visit to Manama. The issue came up on the bilateral dialogue between the teams of the two foreign ministries; it came up in the meeting Lapid held with Bahraini Crown Prince and Prime Minister Salman bin Hamad Al Khalifa; it came up in his historic meeting with King Hamad Bin Isa Al Khalifa; and it also came up in the joint press conference Lapid held with his Bharani counterpart, Abdullatif bin Rashid Al Zayani. “The global battle today is between moderates and extremists. A culture of life against a culture of death and destruction. Together with our friends in the Gulf, we are leading a brave coalition of moderates,” Lapid told the press without mentioning Iran by name. In an apparent allusion to Iran, Lapid also told journalists, "Our opportunities are shared. Our threats are also shared, and they aren't far from here."

Sending an even stronger signal to Tehran, Lapid toured the Bahrain headquarters of the US Navy's Fifth Fleet and visited the USS Pearl Harbor. He was accompanied on the tour by US Charge d’Affaires in Manama Maggie Nardi and Bahrain’s first ambassador to Israel, Khaled Yousif al-Jalahma. Highlighting the strategic importance of the visit, Lapid tweeted, “Israel, Bahrain, and the US are partners in liberty and in a vision of a free world.” Israeli press reported that Israel and Bahrain are looking into cooperation in responding to Iranian drone attacks, considered a growing regional threat.

Prime Minister Naftali Bennett also dedicated much time this week to the campaign against the Iranian threat. First, in his Sept. 27 meeting in New York with Foreign Minister Zayani and Emirati Minister of State for Foreign Affairs Khalifa Shaheen Almarar, and later in the day in his address to the United Nations General Assembly.

The vigorous Israeli campaign against Iran comes on the backdrop of reinforced efforts by the European Union to relaunch talks with Tehran. On Sept. 21, on the margins of the UN General Assembly, EU High Representative for Foreign Affairs Josep Borrell met in New York with Iranian Foreign Minister Hossein Amir-Abdollahian. Then, on Sept. 30, Borrell said that stalled talks between Iran and world powers will resume "within an acceptable period of time."

Alongside the Israeli campaign, there are also other voices coming from Bennett’s Cabinet. On Sept. 15, Defense Minister Benny Gantz said he would be prepared to accept under certain conditions a scenario in which the United States negotiates a new nuclear deal with Iran. Gantz told Foreign Policy magazine, “The current US approach of putting the Iran nuclear program back in a box, I’d accept that.”