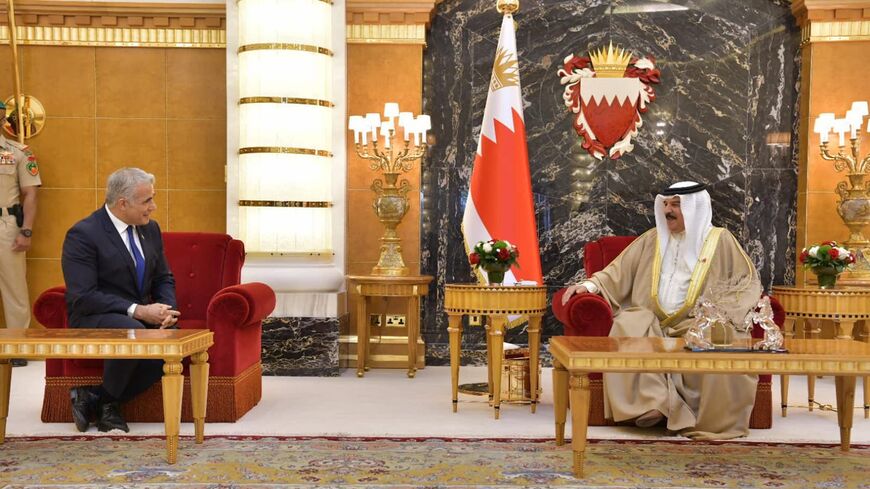 Foreign Minister Yair Lapid met today with Bahraini King Hamid bin Issa al Khalifa at the royal palace in Manama. It was a first public meeting between an Israeli official and the Bahrain monarch. Reports in Israeli media said the two discussed several security issues, first and foremost Iran. They also discussed the development of bilateral economic ties. Shortly after the meeting, Lapid tweeted in Hebrew, Arabic and English, “Thank you to the King of Bahrain, His Majesty King Hamad Bin Isa Al Khalifa, on a historic, warm, and hopeful meeting. His Majesty’s leadership and inspiration have led to true cooperation and our meeting outlined the path forward for our relationship.”

Israel’s foreign minister arrived at Manama this morning, Sept. 30, aboard an IsrAir plane with the word "Shalom" depicted on it. Upon landing, Lapid was warmly welcomed at the tarmac by Bahraini senior officials. Soon after his arrival, Lapid met with the crown prince, Prime Minister Salman bin Hamad al Khalifa, and with Foreign Minister Abdullatif bin Rashid Al Zayani. After the meeting with the crown prince, Lapid tweeted, “Thank you for the privilege of being here today and of together, taking another step in building our relationship in the model of partnership and coexistence between cultures and religions.”

Lapid and his team conducted a diplomatic dialogue with their Bahraini counterparts at the Foreign Ministry in Manama, discussing bilateral cooperation and ways to turn the official normalization agreement into an active friendship expressed in economic, diplomatic and security cooperation and between civil societies. Yesterday, a spokesperson of the Israeli Foreign Ministry said five memorandums of understanding are expected to be signed, including cooperation agreements between hospitals and water and power companies. "The main areas in which Bahrain is looking for cooperation have to do with the economy and technology, and a few of the MOU's that will be signed will be about that," said the spokesperson.

Speaking at a joint press conference with his Bahraini counterpart, Lapid said, "We are both tough peoples. We made life flourish in the heart of the desert. We did this because we know how to adapt to a changing reality. Today, it is our responsibility to build for our children a future of prosperity and progress. Bahrain, like Israel, carries an ancient history together with remarkable capabilities in the new technological world. … Our opportunities are shared. Our threats are also shared, and they aren’t far from here. The global battle today isn’t between right and left, or between Judaism and Islam or Christianity. The global battle today is between moderates and extremists. A culture of life against a culture of death and destruction. Together with our friends in the Gulf, we are leading a brave coalition of moderates."

In an unusual gesture this evening, Lapid visited the USS Pearl Harbor, stationed in Bahrain. US charge d’affaires in Manama Maggie Nardi and Bahrain’s first ambassador to Israel, Khaled Yousif al-Jalahma, accompanied Lapid on his visit to the ship. Israeli sources said the gesture was of strategic importance and a clear signal to Iran.

Concluding his trip to Bahrain, Lapid inaugurated Israel’s embassy to the country. Bahrain's foreign minister was present at the ceremony. Ambassador Eitan Na'eh has been appointed be Israel's ambassador to Bahrain but has not taken up his post yet. Until his arrival, Itay Tanger is serving as charge d’affaires. Ahead of the inauguration ceremony, Foreign Ministry Director General Alon Ushpiz commented that Lapid's meetings in Bahrain were exceptional, even "breathtaking," hailing "a wind of cooperation and friendship" between the two peoples.

Parallel to Lapid’s visit to Manama today, Deputy Foreign Minister Idan Roll dedicated the first direct commercial flight from Bahrain to Israel. Addressing representatives of both countries at a ceremony at Ben Gurion Airport for the new flight route, Roll said “We will continue to make history. I turn wholeheartedly and eagerly to all the states of the region: Join us in the peace accords for a better future for our nations and so that there will be a better world for our children and grandchildren.” He added, “Creating a direct air path between Israel and Bahrain is not only an important symbolic step, but it will increase trade, tourism and understanding between nations.”

Prime Minister Naftali Bennett met with Al Zayani and Emirati Minister of State for Foreign Affairs Khalifa al-Marar on Sept. 27 in New York after addressing the United Nations General Assembly. Addressing both ministers, Bennett said, “First of all, I want to tell you that I met the king of Jordan and the president of Egypt, and they’re of course delighted with the ensuing relationship between our countries, and I want to assure you of continuity.”