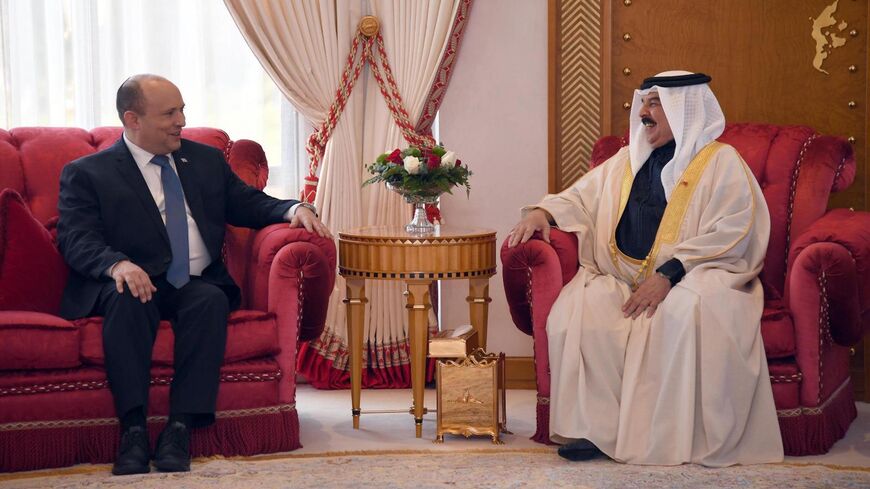 Prime Minister Naftali Bennett met a short while ago with Bahraini King Hamad bin Isa Al Khalifa at his palace in Manama. The two men talked privately for about an hour.

Bennett's meeting with the king followed another with Bahraini Crown Prince and Prime Minister Salman bin Hamad Al Khalifa, also at the royal palace, where Bennett was received with full honors. A short video posted by Bennett’s Twitter account shows the two prime ministers standing at the entrance to the royal palace with the flags of their countries waving behind them, while a Bahraini military band played the Israeli national anthem.

After the reception, Bennett held a private meeting with the crown prince before their teams convened for a working session. Bennett told him, “I see a very big opportunity here. This is the first official visit by an Israeli prime minister to Bahrain. I come from Israel with a spirit of goodwill, cooperation, of standing together in the face of common challenges, and I think our goal in this visit is to turn this peace from a peace between governments to a peace between people, and convert it from something ceremonial to something meaningful.”

Bennett told them, "I'm very delighted to be here in Bahrain, and I could think of no better way to kick off this visit than seeing my family here in Bahrain. All of you are indeed family. I come from Israel with goodwill, with warm friendship between the two peoples, and I'm sure you can be a remarkable bridge between Bahrain and Israel. I'm looking forward to a wonderful day to strengthen the Abraham Accords, to strengthen the relationship between the nations."

After that meeting, Bennett met with US Fifth Fleet Commander Vice Admiral Brad Cooper and praised the cooperation between the IDF and the US Armed Forces that contributes to the security of both countries. Bennett also said that the American forces in Bahrain are a significant element in maintaining regional stability in the face of various security threats.

Continuing his tight agenda, Bennett met this morning with a group of Bahraini ministers including Foreign Minister Abdullatif bin Rashid Al Zayani, Transportation and Telecommunications Minister Kamal bin Ahmed Mohammed and Industry, Commerce and Tourism Minister Zayed bin Rashid Al Zayani. They discussed deepening cooperation as well as various ideas in innovation, economics and technology. After the meeting, Bennett tweeted that he "emphasized the importance of pouring real content into the Abraham Accords via trade, interpersonal relationships, opportunities for Jewish and Muslim economic entrepreneurs and business people and in all other aspects."

Bennett is set to speak this evening to Bahraini university students and present his plan to bolster bilateral relations before heading back to Israel.