Attacks on Emirati and Turkish targets by forces hostile to normalization with Israel are unlikely to be just coincidence as the prospect of new regional partnerships irks Iran. 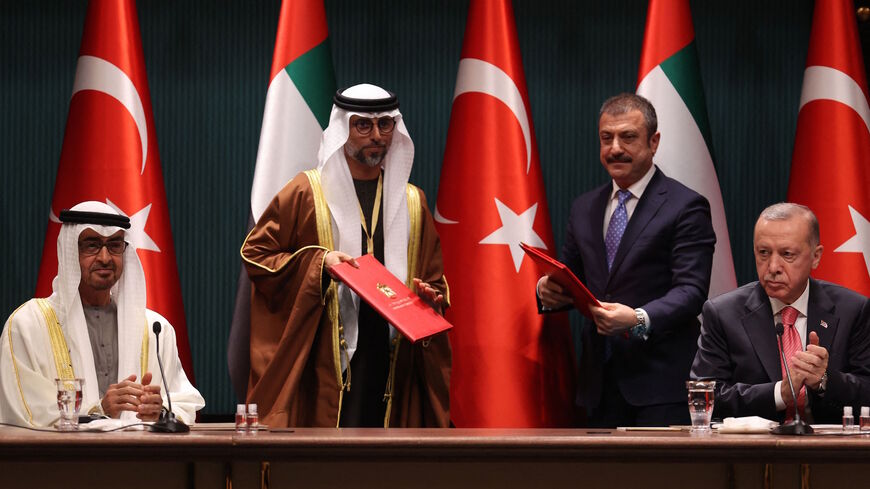 Amid the crisscrossing moves of rapprochement on the Turkey-United Arab Emirates-Israel triangle, Emirati and Turkish targets have faced a string of attacks, claimed by or believed to be the work of Iran-linked groups.

The Iranian-backed Houthis, fighting the Saudi-led coalition in Yemen, fired rockets on the UAE three times last month, with the last attack taking place on Jan. 31 as Israeli President Isaac Herzog visited Abu Dhabi. Then a Turkish military base in Iraq came under attack on Feb. 3, a day after Alwiyat al-Waad al-Haq, a group linked to Iraq’s Kataib Hezbollah, claimed to have launched four drones targeting critical facilities in the Emirates.

As Israel looks to add a security dimension to its ties with the UAE and Bahrain after the Abraham Accords, Iranian reactions via proxies should not come as a surprise. Targeting Turkey should not be surprising either, amid its quest to normalize ties with Gulf heavyweights and Israel.

It was not the first time that the Turkish troops at the Bashiqa base near Mosul came under attack, but the timing of the Feb. 3 incident, in which 18 rockets were fired, was obviously telling. A hitherto unknown group calling itself Ahrar Sinjar said it attacked because the Iraqi government had failed to protect Sinjar, the Yazidi region where Turkey has pursued the Kurdistan Workers Party (PKK) and its local affiliates. The PKK — designated as a terrorist group by Ankara over its nearly four-decade armed campaign in Turkey — has long had bases in the mountains of Iraqi Kurdistan along the Turkish border. Since 2014, it has extended its presence to Sinjar after helping the Yazidis against the Islamic State.

It is highly likely that Ahrar Sinjar is linked to Iraq’s Popular Mobilization Units, the mostly Iran-backed Shiite militia known also as Hashd al-Shaabi. Immediately after the attack, Hamid al-Musawi, a leader of the Shiite Fateh Alliance and the Coordination Framework bloc in Iraq, vowed to expel all “occupation forces” from Iraq, including US and Turkish troops.

Ankara has ignored repeated calls from Baghdad to evacuate the Bashiqa base, which it set up in 2015 to train a Sunni militia, called Hashd al-Watani, to liberate Mosul from the Islamic State. A day before the attack on the base, Turkey bombed targets in Sinjar and Makhmour as well as Derik in Syria. The Makhmour strike claimed eight lives, including five PKK members, and left 17 others injured. In Derik, four fighters from the Kurdish-led Syrian Democratic Forces, which Turkey sees as a PKK offshoot, were killed. In remarks Feb. 3, President Recep Tayyip Erdogan praised the Kurdistan Regional Government, led by Nechirvan Barzani, for “increased solidarity” with Turkey against the PKK.

Another common factor behind the attacks on the Emirati and Turkish targets might be the ongoing efforts to put together a coalition government in Iraq. Shiite cleric Moqtada al-Sadr, the winner of the October elections, has irked Tehran by pushing for a majority government with two Sunni blocs and the Kurds, excluding pro-Iranian Shiite parties. While Tehran is pressing for a united Shiite front, as has been the case since 2005, Sadr’s plan appears to overlap with the interests of both Turkey and the UAE.

Sadr, too, has opposed to Turkey’s military operations in Iraq, but he seems to be a more reasonable option for Ankara than the rival Shiite bloc whose leaders include former premier Nuri al-Maliki.

Sadr was given a high-level welcome in Ankara in 2009, including meetings with the then-president and Erdogan, who was prime minister at the time. Several other contacts with Sadr took place in ensuing years, but with little result. In 2016, Sadr supporters were at the forefront of a protest against the Bashiqa base outside the Turkish embassy in Baghdad. Sadr himself has argued against foreign powers using Iraq as a theater of influence and criticized Turkey’s anti-PKK operations on Iraqi territory.

In the Emirates, the Houthi attacks and Herzog’s visit have overshadowed a recent thaw with Iran, and reportedly precluded plans for an Iranian presidential visit in early February. Citing the UAE’s ties with Israel, the Houthis have threatened further attacks, while Israeli Prime Minister Naftali Bennett has offered “intelligence and security support” to the Emirates in a letter to Abu Dhabi Crown Prince Mohammed bin Zayed.

Israeli Defense Minister Benny Gantz, meanwhile, sealed a security cooperation accord with Bahrain during his first visit to the kingdom Feb. 3.

Israel’s addition of intelligence and defense cooperation to its ties with Gulf states is certainly alarming to Tehran. In a phone call with his Emirati counterpart Feb. 2, Iran’s foreign minister said that no one would benefit from the continuation of the war in Yemen and warned that Israel’s growing presence was a threat to all regional countries.

Iran has held fence-mending talks also with Saudi Arabia, but because of the escalation in Yemen, the dialogue, brokered by Iraq, has failed to ripen. Preparations are still under way for a fifth round of talks.

Amid all those developments, Erdogan has made it clear that the energy rivalry in the Eastern Mediterranean is a major driver in Turkey’s quest for normalization with Israel. In remarks to reporters Feb. 3, he played down Iran’s temporary cut of gas supplies to Turkey, while highlighting gas cooperation with Israel as one of the main topics in upcoming talks with Herzog in Ankara. Turkey, he said, is ready “to use the Israeli gas inside the country and, furthermore, be part of a joint endeavor to carry the gas to Europe.”

As Ankara looking to woo Israel with energy partnership and the UAE and the Saudis with defense cooperation, including the sale of armed drones, such realignment of regional powers would hardly please Tehran. Iraq appears to be the first front where Iran’s annoyance with Turkey is surfacing.