A research and studies department in a local investment company affiliated with Hayat Tahrir al-Sham in Idlib suggested turning Idlib into a cashless society, as a solution to price increases and inflation. 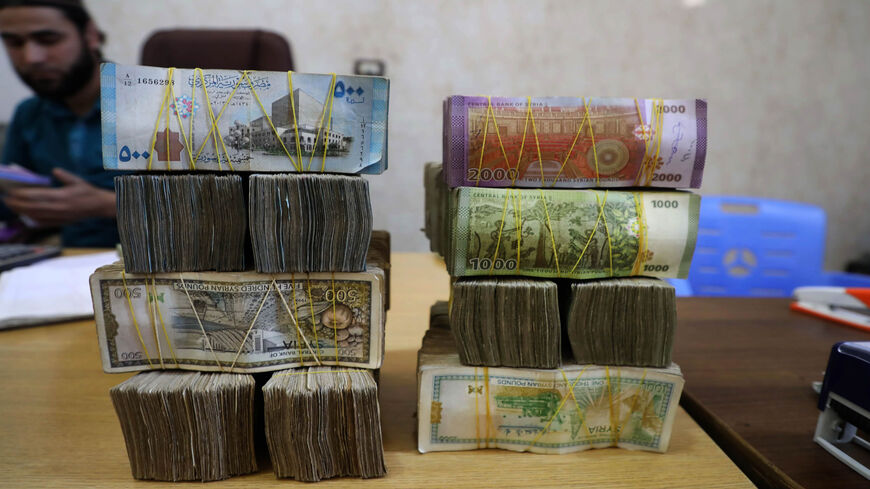 Syrian pounds are pictured at a currency exchange shop in the town of Sarmada, in northwestern Idlib province, Syria, June 15, 2020. - Aaref Watad/AFP via Getty Images

ALEPPO, Syria — Anger is prevailing among Syrians in the northwest province of Idlib due to the current inflation as the prices of goods depend on the Turkish lira’s exchange rate against the US dollar, which has now depreciated to approximately 14 liras to the greenback, as of the time of this writing.

The so-called Syrian Salvation Government affiliated with Hayat Tahrir al-Sham (HTS) in Idlib had adopted the Turkish lira as an official currency in its areas of control in June 2020, instead of the Syrian pound.

Idlib is currently suffering under inflation due to several factors, the most important of which is the purchase of food commodities and goods by sellers in US dollars and selling them in Turkish liras, in addition to the absence of small denominations of both currencies.

Among the suggested solutions is a proposal put forward by the research and studies department of Namaa Investments, a local HTS-affiliated company in the city of Sarmada in the northern countryside of Idlib. The department conducted an opinion poll on transforming Idlib into a cashless society, as one of the solutions to the uncontrollable inflation and high prices of goods.

An economic official close to HTS in Idlib told Al-Monitor on condition of anonymity, “The people of Idlib are suffering under a real economic problem. Sellers price their goods according to the exchange rate; they buy in US dollars and sell in Turkish liras. If customers want to purchase goods in US dollars, the seller will have to calculate the value of the change in Turkish liras, as there are no small denominations of US dollars circulating in the north. The exchange rate will not be fair in either case, as the seller will sell the goods in US dollars at a higher price, and the customer will lose in both currencies.”

He said, “This is exactly why the Idlib economy suffers, which is resulting in great controversy and causing inflation. The only way to resolve this is to adopt the Namaa proposal. It would thus be possible, for example, to create central payment cards, and all parties will have to adopt this method of payment. This is a simple explanation for the so-called cashless societies, bearing in mind that the approved currency here must be the US dollar.”

The official noted, “In order for this method of payment to be easy to use, it must be linked to cellphones, not credit cards. The latter requires the presence of a POS machine in every store, while mobile payment only requires an account and a small QR code for each e-wallet, which is the approved method for all cryptocurrencies.”

Yahya al-Sayed Omar, freelance researcher focusing on the Syrian economy, who resides in Istanbul, told Al-Monitor, “The importance of transitioning to a cashless economy is increasing worldwide, and some countries have made important strides in this field. A cashless economy is intended to enhance electronic trade and reduce dealing with traditional banknotes. This method has several benefits, including combating tax evasion, terrorist financing, money laundering and illegal trade, among others.”

He said, “A cashless economy in Idlib is a theoretical proposal that is not applicable at least in the foreseeable future, as the region does not have a banking system, which is the main obstacle. A developed banking system is necessary to switch to a cashless economy. But the majority of the local community in Idlib lacks a banking culture or has no bank accounts. This takes decades to achieve. On the other hand, the cashless economy cannot reduce the intensity of inflation in the HTS-controlled areas because it is imported inflation. This proposal is more for show; it cannot be adopted on the ground.”

Namaa Investments, established in 2021, is considered the largest economic project in Idlib. It is also the first project of HTS’ General Monetary Agency for Cash Management, which was announced on May 11, 2017, in Idlib, with the aim of regulating exchange operations and preventing monopoly and price manipulation. The agency is concerned with managing the movement of cash in Idlib and is responsible for granting licenses for exchange companies and money transfers and following up on their work.

Omar stressed, “It is impossible to solve the problem of inflation in Idlib without knowing its real causes, the most important of which is inflation in the areas of the Syrian regime; this is imported inflation. In fact, it is impossible to separate the Idlib economy from the economy of the regime-controlled areas, because mutual remittances and smuggling operations overlap between areas, so inflation moves from the regime’s areas to Idlib.”

He added, “Turkey also suffers from a high inflation rate, and Idlib's economy is strongly linked to the Turkish economy, so inflation is imported from Turkey as well, through the Turkish lira.”

It seems that all economic proposals in HTS-controlled Idlib are aspirations that cannot be achieved in reality, given the modest capabilities and infrastructure. HTS is using such proposals in the media to appear as an authority keen on keeping pace with global economic developments. It seems that HTS and the Turkish-backed Free Syrian Army, which controls the areas of Aleppo countryside in northwestern Syria, cannot find real solutions to alleviate the suffering of the people, amid high inflation rates and even higher unemployment rates.