Why is Ankara pouring Turkish liras into Syria?

Taking advantage of Syria’s currency havoc, Ankara has funneled Turkish liras into “liberated” areas in northern Syria, but any plan to fully sideline the Syrian pound in those areas appears unrealistic. 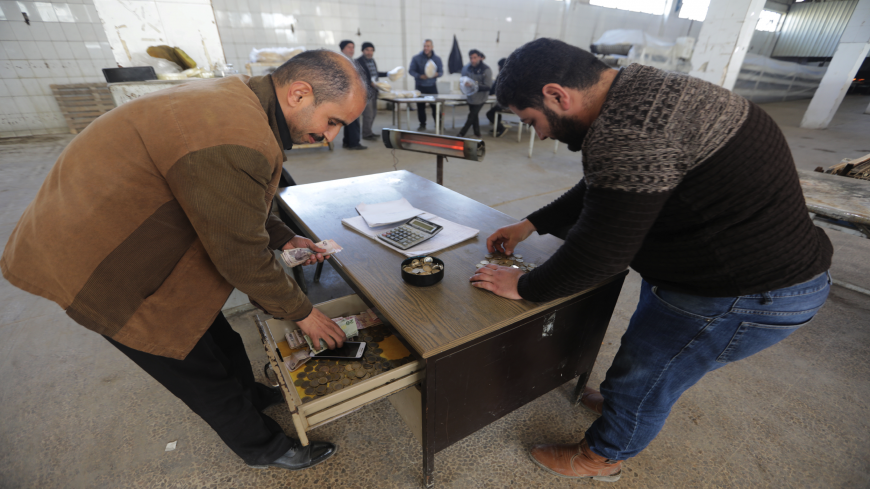 The dizzying nosedive of the Syrian pound on the eve of fresh US sanctions has unleashed developments that threaten to economically cut off northern Syria from Damascus. Amid the currency upheaval, Turkey has poured Turkish liras into northern enclaves under its military control as well as into rebel-held Idlib, where it maintains a heavy military presence. The trend suggests that Ankara might be seeking a de facto “Turkish lira zone” atop its military zones, but this looks like a tall order.

The Syrian pound, which traded at 940 pounds to the dollar in January, hit 3,000 against the greenback June 8 amid fears over the impact of fresh US sanctions under the Caesar Act, expected to kick in June 17, coupled with jitters from the banking turmoil in neighboring Lebanon. Seeing Syria’s currency crisis as an opportunity, Ankara quickly took action, although its own currency has been badly battered over the past two years.

Following Mustafa’s remarks, trade chambers and city councils in Azaz, Akhtarin, Jarablus, Marea and Sawran made statements encouraging the use of the Turkish lira.

The Syrian Salvation Government (SSG) in Idlib, which is affiliated with Hayat Tahrir al-Sham (HTS), the jihadi group that largely controls the province, announced a similar currency switch. SSG finance chief Ibrahim al-Ibrahim spoke of an earlier decision to pay employees in dollars this year, but because of the scarcity of dollar bills, he said, a decision was made to use Turkish liras, as employees objected to being paid in the plummeting Syrian currency. Meanwhile, images shared on social media showed the arrival of bags full of Turkish coins and stacks of 5- and 10-lira bills, worth $0.7 and $1.4 respectively, to an HTS-controlled bank in Idlib. According to some sources, 20-lira bills were also put into circulation.

Turkey designated HTS a terrorist organization in 2018 in line with a decision by the United Nations, but no one in Ankara seems to have any scruples when it comes to banking ties with HTS and the group’s switch to the Turkish currency.

Ostensibly, Turkey aims to contain the economic fallout of the Caesar Act sanctions in the areas it holds, but the move raises the specter of a de facto financial annexation atop military control. Ankara’s foreign policy has traditionally been averse to sanctions, even with respect to UN sanctions against Iraq under Saddam Hussein. In Syria’s case, however, Ankara has welcomed US sanctions, hoping they will bring about the end of Syrian leader Bashar al-Assad.

Could the currency switch involve some prompting from Washington? The area to the east of the Euphrates River, where Syrian Kurds have collaborated with US forces, is the best place to look for any signs to that effect.

Aldar Khalil, a senior leader of the Democratic Union Party, the dominant Syrian Kurdish party, said last week the Caesar Act was imposing a shift to the Turkish lira or the Iraqi dinar, but objections to such a move were raised. In striking remarks that seemed to allude to a likely bargaining on the issue, Khalil said, “They are switching to the Turkish lira in areas invaded by the Turkish state … on the pretext that the Syrian pound is losing value. Things are different in our region; we are using the Syrian pound. And we have no intention of breaking away from Syria. According to what the Caesar Act envisages, we are supposed to use Turkish liras or Iraqi dinars or dollars. These are all tough options. We don’t accept the Turkish lira anyway. And Iraq has its own challenges. Let’s assume the dollar is used; then, a central banking system is required. Also, this would be a political decision. We are part of this country.”

Asked about Khalil's remarks, Omer Cheleng, an economist from Afrin, told Al-Monitor, “The Caesar Act does not impose [the use of another currency], but that’s what one needs to do to avoid its repercussions. It is not a condition but a consequence. I haven’t heard of any US demand for the use of an alternative currency instead of the Syrian pound.”

Ahmet Pelda, an economist who closely follows Syria’s Kurdish-run areas known as Rojava, believes a currency switch would fray the region’s ties with Damascus and thus kill the chance of a political settlement. “Rojava’s use of the Turkish lira or the Iraqi dinar would amount to [dependency] on Turkey or Iraq, meaning separation from the Syrian regime,” Pelda told Al-Monitor. Using the dollar, he said, is the most reasonable option. Pelda added, “In this way, [Rojava] would not be separated from Syria and would not develop any dependency on Iraq or Turkey. Yet this requires enough dollars and an adequate financial administration.”

Syria experts note that the Turkish lira’s replacement of the Syrian pound in a region of several million people would deal further blows to the Syrian economy. Still, one needs to ask here whether Turkey’s currency move is merely propaganda or a step toward economic annexation.

Small inflows of Turkish liras into the Syrian market could be of little relevance to the notion of a Turkish lira zone. Unless further steps are taken to that effect, current decisions to use the Turkish lira might boil down to propaganda. No doubt, paying members of the Turkish-backed Syrian National Army in liras is something that serves Ankara’s interests. An expanded usage of the Turkish lira would appease objections to salaries in Turkish liras and make it easier for Ankara to finance allied groups and covert operations in the region. The lira, however, needs to be convertible, meaning that it has to be used in trade, including imports and exports. And some serious conundrums emerge here.

Most goods flowing into the areas that Turkey seized through operations Euphrates Shield, Olive Branch, Peace Spring and Spring Shield are coming from Turkey. In Idlib, for instance, 95% of such goods come from Turkey and only 5% from government-controlled areas. Yet 90% of Idlib’s sales go to government-held areas and only 10% to Turkey.

So, the Syrian pound inevitably comes into play in commercial exchanges in cities controlled by Damascus where the Turkish lira is of little relevance. In other words, exports to Turkey have to increase to the level of imports so that the use of the lira could gain significance. And any expectation that Turkish-controlled areas could fully sever their economic ties with government-controlled regions is hardly realistic.