Many people in the Kurdistan Region rejoiced while playing in the snow, but such conditions can be dangerous for others, especially those living in displaced people camps. 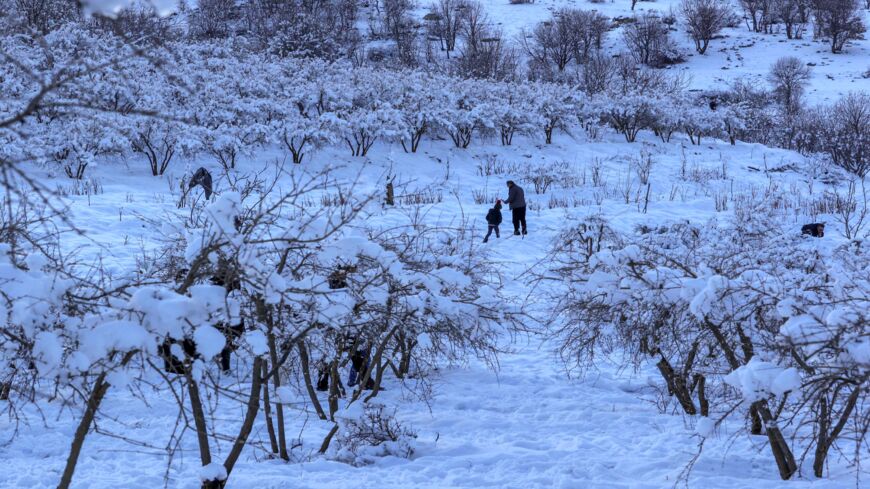 Iraqis play at the snow-covered Safin Mountain on Jan. 18, 2022, near the city of Erbil, the capital of Iraq's northern Kurdish autonomous region. - SAFIN HAMED/AFP via Getty Images

People in the Kurdistan Region capital, Erbil, awoke to find their city blanketed in snow, which pleased many residents.

“The happiness was easily seen in people’s faces. They started posting pictures and videos of the snow on social media,” Zirak Jamal told Al-Monitor.

Jamal said the last time Erbil received heavy snowfall was in 2004. He said the mountains in the Kurdistan Region near the border with Turkey regularly get snow. Erbil received around 3 centimeters of snow this time, according to him.

Snow also fell in northern Syria. Jihan Filik braved the storm with her family in Bayramjah, west of the city of Afrin. The area is controlled by Turkish-backed Syrian rebel groups. She said roads were closed for two days until local authorities reopened them on the evening of Jan. 20.

“Everyone was at home. If you had a car, you couldn’t use it,” Filik told Al-Monitor.

She said the last time the area received snow was in 2003. They received a whopping 30 centimeters of snow, she estimated.

Filik’s family heats their home in a fireplace with wood. They also have a gas-powered generator, and they purchased sufficient food to last them while stuck at home.

“We secured bread and have a generator, but others don’t have this,” she said.

Indeed, the storm created hardship for some in the region, especially those living in displaced people’s camps. The United Nations Office for the Coordination of Humanitarian Affairs (OCHA) said yesterday that 362 tents housing displaced people were affected by the storm in rebel-held northwest Syria. The Abraz camp in Maabatli — just west of Bayramjah — had to be evacuated due to the harsh conditions, OCHA said in a press release.

Smaller amounts of snow fell last night in other areas as well, such as in the Syrian capital, Damascus. Syrian authorities closed the country’s Mediterranean ports yesterday due to the weather conditions but reopened them today, the official state-run news bureau SANA reported.

The storm appears to have passed. AccuWeather’s radar showed no precipitation in Iraq and Syria the night of Jan. 20, only a rainstorm above Iran in the Caspian Sea.