A blizzard has destroyed hundreds of tents in the camps of northwest Syria, where thousands of displaced residents live without heat or medical services. 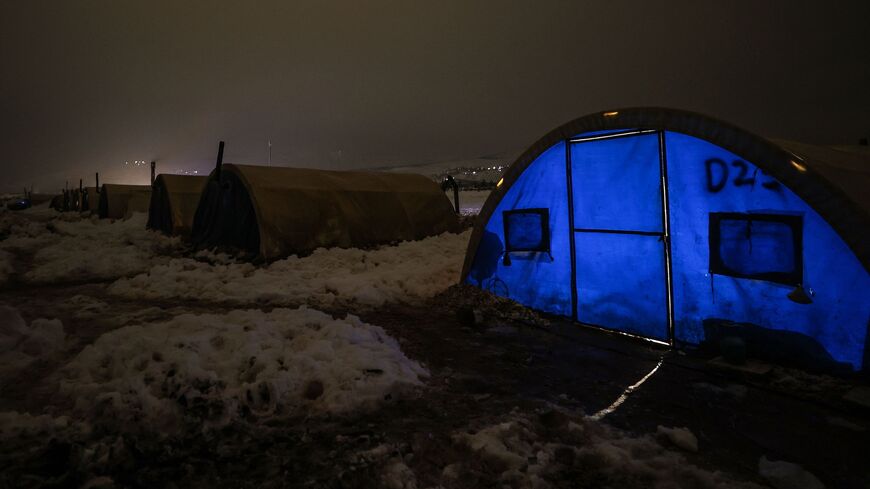 Tents in a camp for internally displaced people are surrounded by snow in the town of Rajo in the countryside of Aleppo in northwestern Syria, late on Jan. 21, 2022, following a winter storm. - OMAR HAJ KADOUR/AFP via Getty Images

The snowstorm that has been raging in the region for days now has wreaked havoc in dozens of displaced camps and destroyed thousands of tents.

The Syrian Civil Defense Organization (White Helmets) reported Jan. 22 that 72 camps housing about 2,250 families in northwestern Syria have sustained varying degrees of damage from the blizzard hitting the region since Jan. 18.

A cry for help

In an interview with Al-Monitor, the director of the Al-Amin camp in Kafr Uruq in the countryside of Idlib said that several families in the camp have been affected by the snowstorm and the closure of the road leading to the camps. He said the child's death has ratcheted up fear in the frigid camps, which have very sparse medical services and few residents have any heat at all.

Fatima al-Ali, who was displaced from Sinjar to a camp in Afrin, told Al-Monitor how she and her family were woken in the middle of the night when their tent collapsed over them. “I was crying out for help. This was the one of the worst nights we faced during this storm. We've struggled with heavy rainfall, but this storm is much worse,” she said.

According to preliminary statistics published in the past few days, the snow storm and heavy rain have destroyed around 920 tents and damaged 1,900 others in 72 camps.