The coldest weather in decades cripples life and transportation in Istanbul, with stranded passengers staging protests at Istanbul airport. 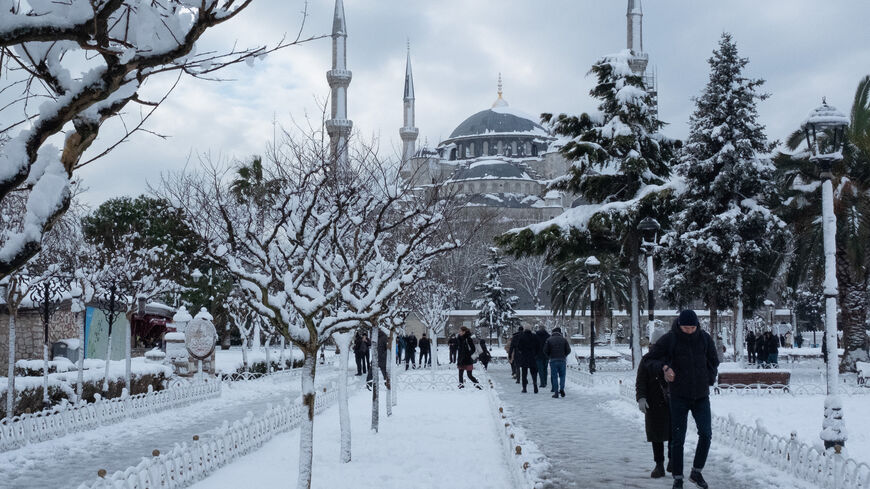 People walk through snow in front of the Blue Mosque in the Sultanahmet District on Jan. 25, 2022, in Istanbul, Turkey. - Chris McGrath/Getty Images

As the worst snowfall in decades paralyzed life in Istanbul and crippled its links to the outside world, the government and opposition-held municipality exchanged barbs on just who was to blame and lauded their own efforts. Meanwhile, television channels and social media showed footage of stranded cars and trucks along highways in Turkey’s largest city.

Ekrem Imamoglu, Istanbul’s social democrat mayor and a potential candidate against President Recep Tayyip Erdogan in the upcoming presidential elections, was the main target of the ruling Justice and Development Party’s (AKP) salvos. Opinion polls consistently suggest that he would beat Erdogan in the race that is scheduled to be held in 2023.

Betul Sayan Kaya, the Istanbul deputy of the AKP, posted a photo on social media of Imamoglu entering a restaurant, claiming that the mayor was “enjoying dinner at a fish restaurant” while women, the elderly and children were out in the cold. “The roads are gridlocked, transportation is paralyzed and there is no snow clearing. … Imamoglu and his team made Istanbul residents miserable. Fortunately, our ministers and teams are helping the people out,” she tweeted. It emerged that Imamoglu had dinner with UK Ambassador to Turkey Dominick Chillcott. The dinner was cut short when he returned to join the snow-control efforts hindered by rush hour traffic.

“We are doing our best to ease the difficulties of the residents and to coordinate with all related parties,” a tired-looking Imamoglu said at a press conference Tuesday morning. He shifted the blame to the Transport Ministry, saying it was the central government’s responsibility to keep roads open and free of snow.

Imamoglu said that during the snow the municipality had continued with subsidized bread sales from dedicated sales points called “halk ekmek” — or people’s bread — which are continually sabotaged by local AKP municipal officials through various means, including conducting needless road works around them.

The mayor said he had provided emergency food packs to some 65,000 people in the 16-million strong megapolis and two tons of food to Istanbul’s fabled feline and canine strays.

In a show of force for the government, Interior Minister Suleyman Soylu and Transportation and Infrastructure Minister Adil Karaismailoglu, accompanied by Disaster and Emergency chief Vali Yunus Sezer, flew to Istanbul Tuesday. They announced that the snow control of the intercity highways and the highways around Istanbul was complete and 100 snowplows had been mobilized to help clear roads.

Transport on Marmaray, Istanbul’s subway system, would be free of charge until Thursday.

Much to the amusement of AKP critics, the two ministers had to land at the old Ataturk airport because the AKP’s showcase Istanbul airport, located 42 kilometers (26 miles) away from the city center, had been closed and largely cut off from the city. Furthermore, passengers, who had been stranded for 30 hours there, had started protests asking for free accommodation, which prompted the airport management to mobilize large numbers of riot police. The Istanbul Airport, a $10.2 billion steel and glass structure with a capacity of 60 million passengers, was shut down from Monday noon to Wednesday, except for a few international flights Tuesday afternoon. This marked the first time that the airport was closed down since its opening in 2018. Passengers in Europe’s busiest airport spent Monday night at the vast complex, curled on the floor or on sheets of cardboard as they waited for their flights.

Travelers arriving before the blizzard complained that they too had been stranded because the motorways around the airport had been blocked for 12 hours. “I picked up my guest, who arrived from Kuwait, around noon Monday, then we toured around the airport for hours, hoping the roads would be cleaned and we’d be able to leave. Seeing that it was impossible, we went back to the airport parking and slept in the car, like so many people,” Mehmet Celik, a tourist operator, told Al-Monitor. “We were able to leave the airport and come to the city this morning. But now we have to try and get back to the airport to pick up his luggage, as the airline had not been able to get the bags to the luggage trolleys this morning.” Celik’s tweets, which showed his vehicle on a paralyzed road around midnight, spat anger at the AKP and Imamoglu alike under the hashtag #novotesforyou.

When a popular comedian posted a clip ranting that he had been stuck on the highway with nobody to come to the rescue for hours, an online joker tweeted, “Just share a Circassian proverb and you’ll be sure that someone will come immediately and get you.” The reference is to prominent journalist Sedaf Kabas, who, in a televised debate last week, cited the Circassian proverb, “If an ox enters a palace, he does not become a king. The palace becomes a barn.” Mere hours after the broadcast, she was detained for insulting the president.

Most of Turkey has been under snow since the beginning of the week.

“Precipitation will continue until Friday (Jan. 28). We will see more snow Tuesday evening,” Orhan Sen, a prominent meteorologist said, explaining that this was the coldest weather in several decades. The Mediterranean city of Antalya, a popular spot for European and Russian tourists, had the first snowfall in 29 years, and many residents posted happy images of youths playing in the snow.

But the overall picture was far from merry: Turkey’s Disaster and Emergency Authority announced that some 4,600 people were left stranded and thousands had been placed in temporary housing across the country. The Directorate of Communications announced that 75 major roads are currently closed to traffic due to snow or storms.

Since Monday, residents of Istanbul struggled to get to work, school or the hospital, with some ditching their cars on the road and walking to work. The Istanbul governor’s office announced that all private vehicles have been banned from entering traffic and intercity buses are stopped until Wednesday morning; civil servants, other than those working in security, health and transportation services, were granted administrative leave until Thursday. Disabled and pregnant civil servants were to remain home until next week. It was also announced that universities would be closed until Jan. 31. Other schools are already on winter break.