TV media figure Sedef Kabas is the latest among tens of thousands to be investigated over insulting the president during Erdogan's time in office. 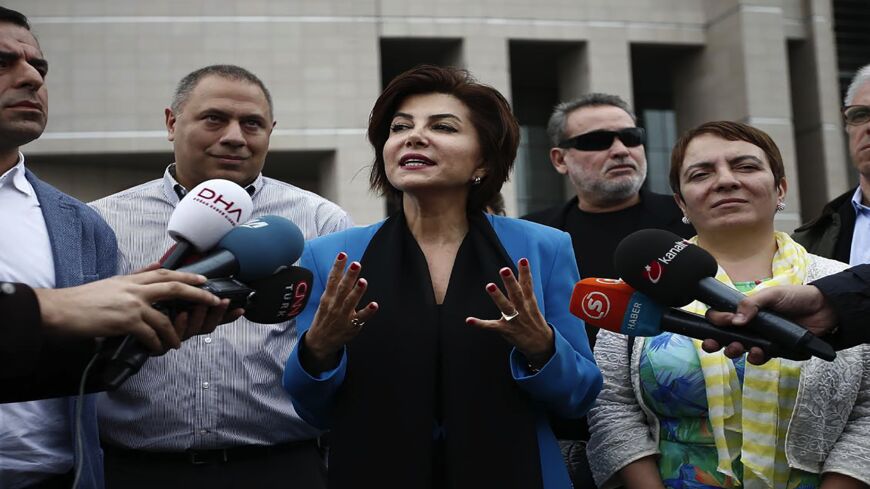 ISTANBUL — One of Turkey’s best-known TV journalists was spending a third night behind bars on Monday after being jailed on a charge of insulting President Recep Tayyip Erdogan.

Media rights groups and opposition figures condemned the Istanbul court’s decision to keep Sedef Kabas in prison ahead of a trial that stems from her reciting a proverb.

Tens of thousands have been investigated for insulting Erdogan since he became president in 2014 under legislation that critics describe as draconian and an obstacle to free speech.

After Kabas was remanded, the main opposition party said it would push for the abolition of the "insult law," which carries a four-year maximum sentence.

Police arrested Kabas, who has hosted a series of high-profile TV shows and lectured on the media in a career spanning three decades, at her home in Istanbul in the early hours of Saturday morning.

A week earlier, she had appeared as a guest on a political discussion show on TV channel TELE1, where she quoted what she described as a proverb: “When the ox goes to the palace, he does not become a king. But the palace becomes a barn.”

Her appearance was followed days later by attacks from senior government figures on social media over the remarks.

It added that her midnight arrest contravened the human rights action plan announced by the government in March 2021, which says suspects should be called to a police station themselves when appropriate.

“The main reason why clear constitutional and legal guarantees on rights and freedoms cannot be implemented in practice is the failure to ensure the independence and impartiality of the judiciary,” the association’s statement added.

In recent years, several high-profile cases have seen defendants held in prison for long periods without conviction. Osman Kavala, a business figure facing an array of charges many consider politically motivated, has been in jail for more than four years awaiting trial.

Kabas’ lawyer, Ugur Poyraz, criticized Justice Minister Adbulhamit Gul for a tweet sent on Saturday morning in which he said “outrageous and unlawful expressions” would “find the response they deserve in the conscience of the nation and before justice.”

A number of other senior members of the ruling Justice and Development Party (AKP) spoke out about the case before and after Kabas’ hearing, including spokesman Omer Celik who seemed to characterize her comments as “hate speech.”

After visiting Kabas, 53, in Bakirkoy women’s prison in Istanbul, Poyraz said she was in good spirits and unafraid “because she is right.” Kabas denies the charge. Poyraz said he had appealed against her detention.

Her case prompted an emergency meeting of Turkey’s broadcasting authority on Monday, according to an opposition member of the Radio and Television Supreme Council.

Ilhan Tasci, appointed as a CHP representative, said that the board fined TELE1 and banned the show on which Kabas appeared — Democracy Arena — for five weeks for “inciting hatred and enmity.”

Since 2014, more than 35,500 cases have been filed over insulting Erdogan, resulting in nearly 13,000 convictions, according to figures from the Justice Ministry.

Turkey has come under international pressure to change the legislation. In October, the European Court of Human Rights ruled a man’s freedom of expression was violated when he was detained in 2017 under the insult law.

CHP Deputy Chairman Ozgur Ozel announced the party would present a bill to repeal Article 299, which encapsulates the insult law.

“It is clear the president should … learn to tolerate different voices and different opinions and make an effort to listen to people who do not have his views,” he said.

Ali Yildiz, a Brussels-based human rights lawyer, said less than 260 people had been prosecuted for insult under the two presidents preceding Erdogan.

“Prosecutions on insulting the president of the republic have been weaponized to suppress critical voices,” he said. “Recently, the European Court of Human Rights found that Article 299 of the penal code bears a systematic problem and should be amended.”

Yildiz said the reason behind Kabas’ detention was “making her an example and sustaining the atmosphere of fear.”

Kabas was convicted of insulting the president in 2019, but a prison sentence of just under a year was suspended.

Her arrest comes as Turkey faces presidential and parliamentary elections next year amid the worst economic crisis of Erdogan’s time in power. In such a febrile atmosphere, the pro-government media has been quick to target dissenting voices.

Singer Sezen Aksu was recently targeted over alleged blasphemy in a song released five years ago.