Two reports, one from Amnesty International and another from Turkey’s Association of Journalists, have again drawn attention to Turkey’s deteriorating record on freedom of expression. 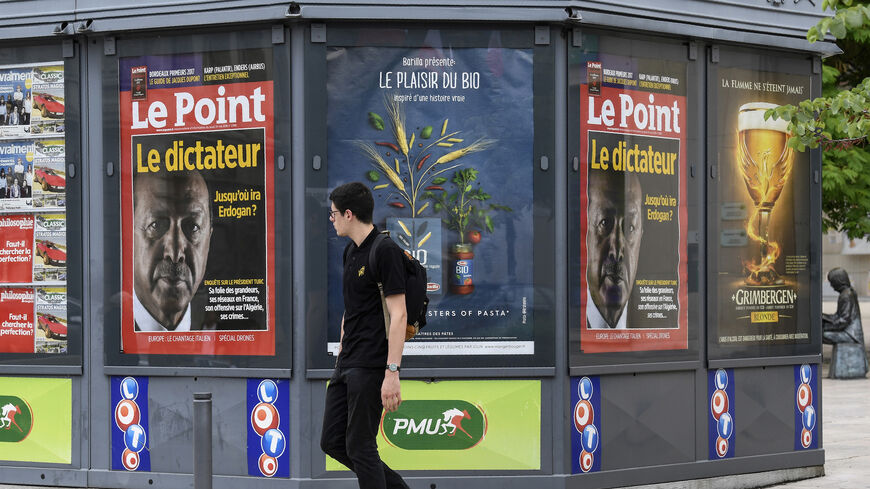 A man walks by a storefront displaying the front page of French news magazine Le Point showing a picture of Turkish President Recep Tayyip Erdogan and reading "The Dictator" on May 30, 2018, in Valence, at the newsstand whose owner was forced by supporters of Erdogan to remove it the day before. - PHILIPPE DESMAZES/AFP via Getty Images

ANKARA — As Ankara basks in its newfound popularity amid the Ukraine crisis, a report by the human rights watchdog Amnesty International held up a mirror this week to Turkey’s Achilles’ heel: democratic backsliding and a politicized judicial system.

The report, which described 2021 as “a story of betrayal and hypocrisy in the corridors of power” in the world, cited Turkey’s withdrawal from the Istanbul Convention, a pan-European accord that tasks the signatories with preventing and punishing domestic violence, as one of the worst moments of 2021 in Turkey.

The report also flagged the last year's high-profile human rights cases, many of which went on into 2022. One of them is the push for the closure of the People’s Democratic Party (HDP), the main political movement of the Kurdish people and the third largest party in the parliament, as well as banning dozens of its members from politics. The report pointed out that the four-year prison sentence of Selahattin Demirtas, the HDP’s former co-chair, was upheld by the Court of Cassation. Demirtas was accused of “making propaganda for a terrorist organization.” The report pointed out that the Council of Europe’s Committee of Ministers has repeatedly called for his immediate release. The report also referred to CoE’s Committee of Ministers’ initiation of infringement proceedings against Turkey for its failure to comply with the judgment to release philantropist Osman Kavala, who is kept behind bars for nearly four years on charges of attempting to overthrow the constitutional order and espionage. Kavala will face court once more on April 21.

Another document, the Annual Media Monitoring Report 2021, also raised a red flag on the freedom of expression and press freedoms in Turkey. “In 2021, 241 journalists stood trial, 73 journalists were detained, a radio broadcaster was killed and 115 journalists were physically attacked,” read the report prepared by the Media for Democracy Project by the Ankara-based Association of Journalists. Released two days before the Amnesty document, the home-grown report pointed out that conditions are deteriorating for Turkey’s journalists, who face restrictive laws, censorship, online threats and bureaucratic barriers to obtaining press cards. A professional satisfaction survey found that 73% of the journalists interviewed said that they could not practice their jobs freely and 60% said that they had their articles censored.

“Over one-third of journalists we have interviewed have been arrested, prosecuted or have an ongoing trial,” Kenan Sener, secretary-general of the association and the report's co-author, told Al-Monitor. “Journalists or anyone with a critical stance toward the government were obstructed with smear campaigns both online or by pro-government media or online threats. More concerningly, such threats were then turned into physical attacks.”

“Despite the fall in the number of journalists behind bars since 2016, Turkey still has the highest number of imprisoned journalists,” Sener said. After that year's unsuccessful coup attempt in Turkey, 158 journalists were jailed.

Journalist Sedef Kabas pointed out that in percentage of journalists jailed in comparison to population, Turkey overtakes China on the list. Kabas herself spent 49 days behind bars for a remark she has made at a news show. “An ox does not become a king simply because it has entered the palace. Rather, the palace becomes a barn,” she said, quoting what she said was a Circassian proverb. Mere hours after the remark, she was taken from home in Istanbul and placed in prison under Turkey’s infamous Article 299, which makes insulting the president a crime. On March 11, she was sentenced to two years and four months in prison, but appealed the sentence. “I will go to the higher court, then to the Constitutional Court and even to the European Court of Justice if necessary,” Kabas said.

“Journalists put in jail are not even news in Turkey,” she said at a conference in Ankara titled, “The Heavy Toll of News.”

“The reason that my case has become a headline is because I might be the only journalist in the world imprisoned for quoting a proverb,” she said. “The whole thing is surreal — how could quoting a proverb be an insult? Proverbs, folktales, jokes are anonymous. But whatever happens, I will go on speaking and so should you, so that we will not go into a spiral of silence.”

A new draft bill by the ruling party places still another control over journalists. Submitted last week by Bulent Tufenkci from the ruling Justice and Development Party, the law would punish journalists whose reporting damages the reputation of financial companies with up to three years in prison in addition to fines that are already in place. The articles say that journalists may be charged with defamation even if they do not explicitly name the company. Journalists, lawyers and opposition deputies have claimed the bill is an attempt to obfuscate the dealings of companies close to the government.

“This law is against the freedom of press, whose duty is to expose corruption,” said Ali Mahir Basarir, a deputy of the opposition Republican People’s Party, implying that this was a made-to-order law aimed to prevent press scrutiny on pro-government companies that enjoyed hefty credits from state banks.

Heaping praises on Turkey’s geostrategic importance and blocking criticism of Ankara’s patchy human rights record seems very much the order of the day in Ankara. The two European Union leaders who visited Turkey in March — Germany’s newish Counselor Olaf Scholz and Dutch Prime Minister Mark Rutte — carefully refrained from any harsh words on Turkey’s human rights issues. Instead, they said they did not see eye to eye on human rights and freedom of expression with their host, President Recep Tayyip Erdogan. It was only after he was asked by Dutch lawmakers upon his return to the Netherlands that Rutte shared that he had raised the issue of Demirtas and Kavala staying behind the bars during his talks with Erdogan. German daily Frankfurter Allgemeine Zeitung warned that a genuine rapprochement between the EU and Ankara should not be expected unless Ankara drastically improves its failing human rights record. A good part of the German media was critical of Scholz for his timid mention of human rights in Ankara.

But others, like Nacho Sanchez Amor, the European Parliament’s rapporteur on Turkey, maintain that despite Turkey’s growing geopolitical importance, any institutional change would need to be coupled with democratic reform. “Until there is democratic reform, the European Parliament is unlikely to support opening of new accession chapters,” said the Spanish social democrat in a video message to the “The Heavy Toll of Journalism” conference. Amor maintained that the next European Parliament report, which would come to parliament’s agenda late May or early June, would tie the upgrading of the customs union to the condition of improvement on human rights, democracy and the rule of law.

Though the Ukraine crisis has provided a window of opportunity to Turkey to address its issues with the Western countries, it would be impossible to advance the ties on geopolitics alone, according to Sinan Ulgen, a former diplomat and the founding chair of the Istanbul-based Centre for Economic and Foreign Policy Studies. “There is no doubt that there is an advantage now but in order to realize the full potential, the geopolitics card has to be accompanied by the democratization card, otherwise it would not go very far,” he told Perspektif magazine. “There should be no questions on just what side Turkey belongs to in the divide between authoritative states and liberal democracies.”