Palestinian prisoner Hisham Abu Hawash has agreed to end his 141-day hunger strike with the news that Israel will finally release him from administrative detention next month. 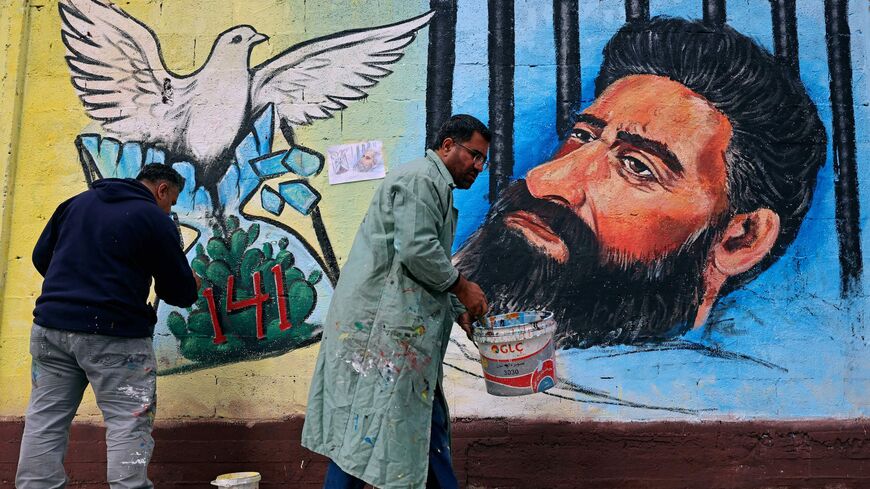 Palestinian artists work on a mural of Hisham Abu Hawash, a Palestinian prisoner who ended his hunger strike after Israel committed to his eventual release, in Gaza City Jan. 5, 2022. - MOHAMMED ABED/AFP via Getty Images

Abu Hawash, a 40-year-old resident of the West Bank village of Dura, near Hebron, has been held in Israel under an administrative detention order since October 2020. According to the Shin Bet, he is member of the terror group Islamic Jihad, but he has never been charged. Upon his arrest, the Shin Bet presented confidential documents to justify his detention. The legal measure allows Israeli authorities to arrest people deemed to pose an imminent security threat and hold them without charges or setting a trial date.

Abu Hawash started his hunger strike after the Aug. 17 renewal of the first administrative detention order in October. Since then, he has avoided food and drank only water and his health has deteriorated.

Palestinians across the West Bank and the Gaza Strip have protested in recent weeks in support of Abu Hawash. Islamic Jihad has threatened Israeli with military action if he dies in custody. The group’s Secretary General Ziyad Al-Nakhala warned, "We will consider this a premeditated assassination carried out by the enemy, and we will deal with the matter in accordance with the requirements of our commitment to respond to any assassination.”

The Saudi-based Organization of Islamic Cooperation issued a statement Jan. 4 saying that the leadership "expressed grave concern over the critical health situation of the Palestinian prisoner Hisham Abu Hawash, who is on an open hunger strike for the 141st day in protest against his detention without trial in the Israeli occupation jails."

Israeli assessments from yesterday said growing tensions on the Gaza border in recent days were related to this affair and instigated by Islamic Jihad. Other reports said that the prolonged detention of Abu Hawash and his death could escalate tensions in the West Bank, especially on the backdrop of the Dec. 28 meeting in Israel between Defense Minister Benny Gantz and Palestinian President Mahmoud Abbas. The meeting in Gantz’ home in Rosh Ha’ayin was followed by the announcement of a series of confidence-building measures for the Palestinians. Still, Abbas was criticized by several Palestinian groups over the meeting.

Reports say that Egypt has been involved in recent efforts to secure Abu Hawash's release that intensified over the past two days, with the Palestinian Authority's intelligence chief, Maj. Gen. Majed Faraj, getting involved. Faraj was also present at the Dec. 28 meeting between Gantz and Abbas in Rosh Ha’ayin.