The recent spike of violence in Yemen has killed the hopes of Yemenis for a better chance for peace as this year begins. 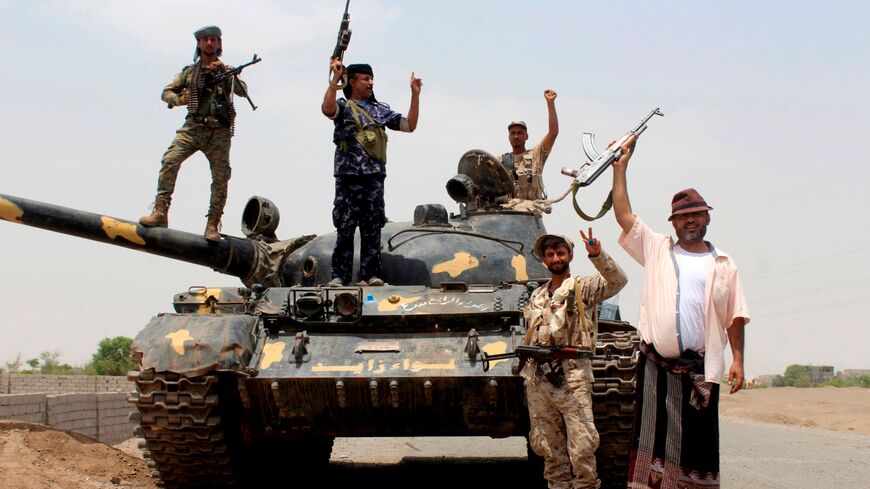 Fighters of the UAE-trained Security Belt Force, dominated by members of the Southern Transitional Council, which seeks independence for south Yemen, celebrate on the outskirts of the Abyan province in southern Yemen on Aug. 29, 2019. - SALEH AL-OBEIDI/AFP via Getty Images

The seven-year war in Yemen has not subsided, and it appears to be escalating further in 2022. The recent spike of airstrikes by the Saudi-led Arab coalition and the movements of the armed forces in southern Yemen have killed Yemenis' hopes for peace this year.

The coalition is determined that military force will bring a political resolution. It blames the Houthis for failing all peace initiatives presented since the beginning of the war. On Dec. 26, Turki Al-Malki, the Arab Coalition’s spokesperson, said, “The political solution is the best option for the crisis in Yemen, but the military tool seeks to achieve this goal.”

Malki pointed out that the coalition has several targets, but it has not hit them out of care about civilians. He added, “We avoided attacking many targets in Sanaa because civilians are a priority for the coalition, and the [Houthis] have to remove all weapons from civilian sites. We take the decision when and where to target the Houthi capabilities.”

The aerial bombing is not the sole escalation. Ground fighting has been deadly over the first week of January in Marib, with 200 fighters killed from both sides in 24 hours, medical and military sources said on Jan. 4.

Early this week, massive ground forces moved from Yemen’s Shawba, advancing towards the Houthi-controlled districts of Usailan and Baihan. The troops also intend to push towards neighboring districts in war-ravaged Marib province.

In a recent interview with Sky News Arabia, Yemen’s Prime Minister Maeen Abdulmalik Saeed said there is political support for these military movements and "we will see extraordinary developments in the coming days.”

A political commentator in the Houthi-dominated Sanaa told Al-Monitor that the present scenario points to the two sides’ dependence on the battlefields, and a viable political settlement is still unlikely.

“When the Houthis started fighting the Yemeni government, they used to have fewer weapons than now. Now they have missiles and drones, and this means it is hard or impossible to defeat them overnight,” the commentator said, preferring to remain unnamed.

He believes that the rapid military solution is not feasible, and the political dialogue has made no headway over the last seven years. Therefore, as the war prolongs, the humanitarian crisis will worsen nationwide.

On Dec. 28, the UN envoy to Yemen, Hans Grundberg, said the scale of the latest escalations is “among the worst we have seen in Yemen for years, and the threat to civilian lives is increasing. Airstrikes on Sana’a have resulted in loss of civilian lives, and damaged civilian infrastructure and residential areas.”

The UN envoy admitted that 2021 ended on a tragic note for Yemenis as poverty, hunger and severe restrictions on freedom of movement affected millions of people. Such a tragedy will not vanish this year.

Malki told the Saudi Press Agency that the Houthis hijacked a UAE-flagged cargo ship off Hodeida on Sunday, Jan. 2, carrying medical equipment from Yemen’s Socotra to Jazan in Saudi Arabia.

Malki called on the Houthis to release it, “or the coalition forces will undertake all necessary measures and procedures to handle this violation, including the use of force if necessary.”

While the coalition said the ship carried no military hardware, the Houthis announced that the vessel carried military vehicles and rifles. In a news conference, Houthi military spokesperson Yahia Saree said that the ship “entered Yemeni waters without authorization” and was carrying out hostile acts.

Abdulsalam Mohammed, the head of Abaad Studies & Research Center, said the Houthi seizure of the ship will spark a military escalation. It "is a serious matter, regardless of the type of the ship’s load or nationality. The incident will likely prompt a military escalation on the [Hodeida] coast based on international consent, and this may affect the coalition’s and the government’s obligations towards the Stockholm Agreement.”

Like politicians and military experts, civilians expect the turbulence not to wane this year. Aseel Nasser, a 28-year-old resident in Sanaa, told Al-Monitor that an abrupt end of war is still unrealistic. However, he said, the developments in the country herald a prolonging conflict.

“Over the first three years of war, I used to think a miracle would happen and the war would stop. Now seven years have passed, and the war has not lost its momentum. Both warring sides pin hope on the force, not dialogue, to stop the conflict,” said Nasser.