Ten years after founding his own party, Foreign Minister Yair Lapid keeps low profile so as not to jeopardize his chances of taking over the premiership in a year and a half. 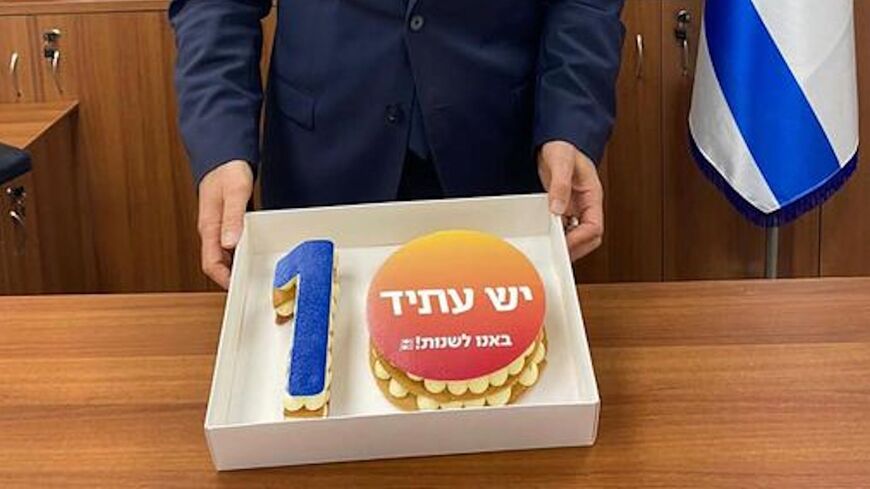 Until January 2012, Lapid was a popular TV host and columnist. At 48, he was considered one of the most influential people in the country’s television industry. He hosted Channel 2’s “Friday Studio” and wrote the most highly read column in the “Seven Days” weekend supplement of the Yedioth Ahronoth newspaper. He spoke and wrote extensively about secular and liberal ideals while expressing his deep desire for a new kind of politics to transform the country.

A decade later, in January 2022, Lapid can look back with pride at what he has achieved. Unlike so many other centrist parties that disappeared almost as quickly as they emerged, the party that he founded survived, and Yesh Atid is now the second-largest party in the country. Today, Lapid stands at the forefront of the center-left bloc, and barring any surprises, will become prime minister in another year and a half. He has the backing of a party with hundreds of thousands of supporters and tens of thousands of activists.

The party Lapid created is a mirror image of the Likud, and he is a mirror image of its head, former Prime Minister Benjamin Netanyahu. Netanyahu is the unchallenged leader of an alliance of the dispossessed, while Lapid represents the wealthiest members of the upper middle class, living in the well-to-do areas in the center of the country. His constituents are for the most part secular Ashkenazi Jews.

Lapid has created a political home for them and a sense of pride in their identity after 12 years of Netanyahu and the Likud. He took advantage of a political situation in crisis and rode the wave of an enormous protest movement that wanted to replace Netanyahu.

Nevertheless, his political ambitions and plans are still unclear.

Lapid may be Israel's alternate prime minister, but he is keeping a low profile in the battle against the coronavirus. By leaving management of the pandemic up to Prime Minister Naftali Bennett, he can avoid being associated with any failures. In the same vein, he has kept his views on foreign policy to himself, even sometimes coming off as contradictory. He supports Defense Minister Benny Gantz’ meetings with Palestinian President Mahmoud Abbas, but insists that there will not be a diplomatic process. As for steering clear of corruption, Lapid has proved time and again that he is really good at sloganeering, but not quite as good at putting all those lofty words into practice. He tried to appoint his sister-in-law Keren Ilil to a public position only to renege, and he is responsible for one of the most bloated and wasteful governments in Israel’s entire history.

The question “Who are you?” asked by the international press on the morning after the January 2013 election is just as relevant today as it was almost a decade ago.

Lapid was a complete unknown at the time to anyone outside of Israel. Who was this man who came out of nowhere and won 19 seats, just a year after diving into Israel’s turbulent political pool? How did he suddenly become head of the country’s second-largest party?

Foreign journalists cobbled together a profile of the man being mentioned as a future prime minister. There wasn’t much to work with despite his colorful past as a journalist, TV personality, playwright and author. He was also frequently described as one of the sexiest men in Israel.

Lapid was at the forefront of a new spirit of change in the country. He was the voice of a new generation, someone who came to change the economic and political system from the inside out. He was carried on the back of the widespread social justice protest movement that swept the country in the summer of 2011 and posed a threat to Netanyahu himself.

“We are Israelis. We are patriots. We are a party of moderates. The biggest political struggle we face is no longer between right and left. It is between the center and the extremists, and the center is winning. We believe that change will come if good people decide to take responsibility. We will let people on the outside scream and cuss even if it brings this country to a very low place. We have a sense of responsibility. We are the ones who saved Israeli democracy, who saved the Israeli economy and who saved Israel’s international relationships.”

Is all that true?

But judging by the growing cleavage in Israeli society, Lapid is not a unifier. The man who successfully won five seats away from the Likud in the 2013 election has since distanced himself from those constituents. They see him as a condescending elitist. Regardless of all the kind words and rhetorical flourishes he uses to present his philosophy, his rhetoric is a problem because it depicts Netanyahu’s million voters as a herd, blindly following its shepherd.

Another issue working to Lapid’s detriment is that he founded and controls a one-man party. No one can run against him, despite efforts to give the idea that the party has primaries. Perhaps out of the trauma of his father’s experience, the younger Lapid has designed a the party he controls in perpetuity. He alone appoints branch leaders, Knesset members and ministers.

And that is why Yesh Atid has little future as a party without him. Lapid is young — not yet sixty — and at full strength, on his way to becoming prime minister. However, if he wants his party to survive after him, he most start cultivating political heirs. Will he?