Foreign Minister Yair Lapid has abandoned his aspirations for leading the center-right, targeting instead the center-left camp. 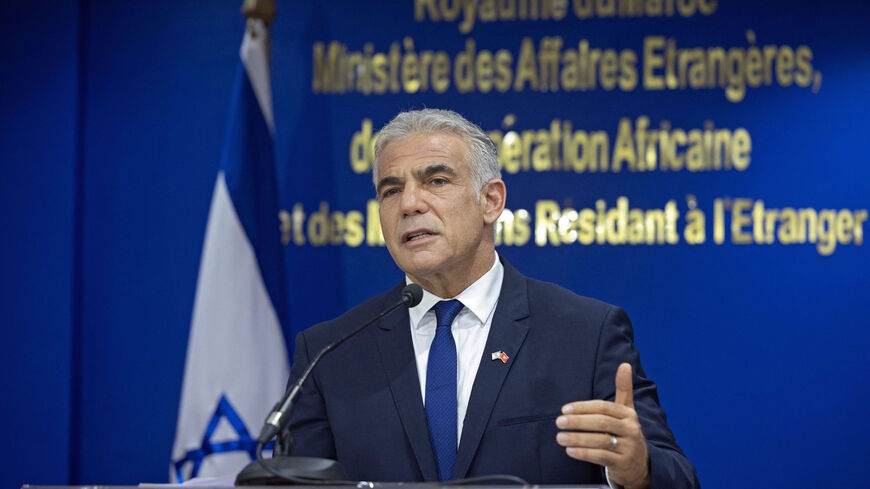 Israeli Foreign Minister Yair Lapid is pictured during a press briefing with his Moroccan counterpart, in Rabat on Aug. 11, 2021. - FADEL SENNA/AFP via Getty Images

As a novice politician in late 2012, Israeli Foreign Minister Yair Lapid tried to target the political center, but with a wink and a nudge to the right.

He had lofty goals, too. He wanted to be prime minister one day, and he believed that the only way to achieve that in Israel was by moving voters from the soft right to the center. He fought hard against the BDS movement to boycott Israel, and made a big deal of every missive he fired off to some international organization or other. He built up a reputation as a patriot with hawkish security views, too. So, for instance, in his 2020 campaign, he announced that, “On our watch, the next time they shoot missiles at Israeli citizens, the heads of Hamas won’t be getting anymore suitcases stuffed with dollars. No, they’ll be getting a missile, delivered straight to their homes.”

For years, he also fought back against anyone who described his Yesh Atid party as center-left. He asked journalists personally not to refer to it that way, claiming that it was only “centrist,”  and that he actually grew up in a rightwing home. He often told people that his father, former Minister Joseph Tommy Lapid, supported iconic Likud Prime Minister Menachem Begin, who won the hearts of the Mizrahim and other underrepresented sectors of the population in the 1970s.

Every so often, he would even lash out against Arab members of Knesset, intending to associate the group with the actions of former Knesset member Haneen Zoabi of the Arab Balad party. Zoabi earned notoriety back in 2010, for participating in the flotilla to Gaza, together with various Palestinian organizations.

The strategy had no real results. The Likud remained the dominant party. Even if Lapid managed to win a few Likud voters, his base consisted of more affluent individuals in the wealthy cities and towns of the country’s center. They were the people once called the “White tribe.” They were Ashkenazi, and they were secular.

But Lapid has undergone a transition since then. He still dreams of being prime minister, and is set to take the position in a year, according to the coalition agreement, but he has also realized that he will never win over the Likud’s base. He therefore decided to adopt a new strategy. As soon as the Blue and White party leader Benny Gantz crashed, he realized that there was a leadership vacuum, which he could fill as leader of the Israeli center-left.

Judging by his statements, this new Lapid is no longer seeking the support of Mizrahim and people who live in the periphery. He has started using divisive rhetoric against them, effectively insulting an enormous swath of the population in Israel today.

This was evident in a speech he delivered last week at a Yesh Atid gathering to mark 100 days of the new government. His speech was full of lofty language about national unity and healing the rifts left behind by former Prime Minister Benjamin Netanyahu. With this speech, Lapid became the official leader of the “White tribe.”

The foreign minister decided to hold the event at Kibbutz Shefayim, long popular with center-left leaders. The old Lapid, who tried to build bridges to the Mizrahi periphery, would likely have chosen another venue.

“Today, Yesh Atid is the most influential political movement in Israel,” Lapid declared as he began his remarks. With 17 Knesset seats, his party is, in fact, the second-largest in Israel, but far smaller than the Likud, which walked away from the election with 30 seats. True, the Likud is now in the opposition, but its base hasn’t abandoned it. In fact, the party has actually grown stronger. With his remarks, what Lapid really did was erase a good part of the Israeli electorate. Hearing what he had to say, they rallied around their leader, Benjamin Netanyahu.

But that was hardly Lapid’s most problematic statement. The best was yet to come. Lapid boasted that the new government had managed to heal the rifts in society. “We restored a sense of normalcy. We created something new, something that the whole world is watching. The whole world wants to study our new model.”

But is that really the case? Israel’s largest party, the Likud, was kept out of the new government because the person who heads it — Netanyahu — was boycotted. Thus, one million voters feel as if their voice was erased. Now Lapid is drawing a distinction between them and the “normal” camp. In other words, anyone who doesn’t belong to his camp — i.e., the right and the ultra-Orthodox — is in some way not normal.

This is a clear case of identity politics, intended to give Lapid’s supporters and potential voters a sense that they are the good guys, the people with values and a strong moral code, especially as compared to “the Other.”

The problem is that “the Other” is not some marginal group in Israel. It is a large and stable political movement. Lapid shows no qualms about portraying himself as victims of the Likud’s hatred. He said, “[Prime Minister] Naftali Bennett somehow manages to smile, when he hears the opposition call the prime minister of Israel a ‘traitor’ and a ‘con artist.’ I don’t know how he does it. I can’t. I can’t help being shocked by all the hatred they spread.”

Are the one million people who voted for the Likud really spreading hatred? Far from it. Most Netanyahu supporters are law-abiding citizens, who pay their taxes and serve in the IDF. They are the very same people whom Lapid once tried to win over to his own cause. Now he disparages them. Sadly, he is doing the very same thing to them that he once accused Netanyahu of doing. He is promoting polarization.

In his speech, he assured his audience: “It won’t help. This government has already changed the country. People can agree with it. People can disagree with it. Regardless what they think, however, this is a normal government led by normal people, who come from the right place.” Not only is he picking a fight, it seems. He is belittling and disparaging a large sector of the population. He seems to have determined that only those people who support the new government are “normal,” because it serves the new Lapid, leader of the “White tribe.” He has effectively divided Israel into Us and Them.

Nothing that Lapid said could have healed the divisions in Israel. But his speech was devoted to the exclusion of the other. Very soon, Lapid will be prime minister. Why, then, is he resorting to the lowest form of identity politics and divisive rhetoric?

The only possible explanation is that he has given up on the periphery, and that he is preparing for the possibility that the new government does not survive. If it falls, he will head to the next election as leader of the center-left, or the “White tribe.”