Mohammed al-Halbusi is Iraq's speaker of parliament for a second term despite opposition from Shiite parties aligned with Iran. 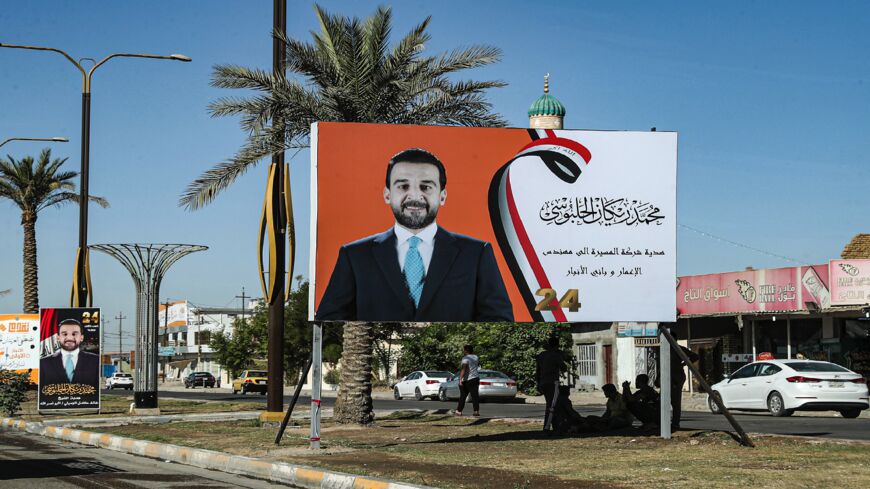 BAGHDAD — The first session of Iraq's new parliament was held on Jan. 9. In that session, new parliament members voted that Mohammed al-Halbusi will serve a second term as speaker of the Iraqi parliament.

From the start of the day, different party members showed their strengths via different methods.

Independent members representing the Tishreen protest movement made their way to parliament in tuk-tuks. The three-wheeled vehicle became a symbol of the protesters during the 2019 October demonstrations, eventually representing the entire Tishreen movement.

Sunni members from both rival groups, the Taqaddom Alliance and the Azm Alliance, gathered around for a photo op before the start of the session. Kurds and other minority members wore traditional clothing to the session.

The strongest presence was that of Sadrists, who tied white fabric on their shoulders symbolizing burial shrouds as a means to send a message to their rival Shiite parties that they intend to fight to the death.

Shiite parties were sharply divided after the elections. Sadrists (the biggest winners) won 74 seats and are calling for a majority government. Their Shiite rivals — including among others the Fatah Alliance (affiliated with the Popular Mobilization Units), Ammar al-Hakim’s Hikma bloc, Nouri al-Maliki’s State of Law Coalition and Haider al-Abadi’s Nasr coalition — are calling for a consensual government. They all gathered under the name of the Coordination Framework with a total of 59 seats.

The main reason behind the dispute between the Sadrists and the Coordination Framework is that the former wants to form the government with its Kurdish and Sunni allies and without other Shiite parties. But Framework members, who lost the elections to the Sadrists, want to remain in power and receive a share of the new government.

Coordination Framework members strongly objected to the election results as they realized that Muqtada al-Sadr's rise to power would eliminate them from the government. Hence, they claimed election fraud and pushed their followers to protest at the Green Zone.

Protesters set up camp for two months, demanding the annulment of election results and a new election. The protests turned violent a few times, but protesters quit and went home as they realized that their demands would not be met.

Having said that, the first session of Iraq's new parliament wasn’t calm at all. The Coordination Framework tried to prevent Sadr from pushing the wheels for the majority government.

Sadr had brokered a deal with the Sunnis and Kurds. Less than a week ago, he received Sunni Taqaddom party leader Halbousi at his home in Najaf. This is while Sadr’s delegation traveled to Erbil to court Kurdistan Democratic Party (KDP) votes.

An anonymous source from Sadr’s political office told Al-Monitor that “Sadr has already built his coalition and has secured enough votes to form a majority government.”

Although Sadr has 74 seats, the abovementioned alliances provide him with enough votes to form a majority of 165 in the parliament, which is required for electing the parliament speaker and prime minister. Halbousi has 37 seats. The KDP controls 31 seats, which brings the number of Sadr’s coalition to 142. Sadr also has been granted the support of the Azm Alliance led by Khamis al-Khanjar, which provides him with 14 more seats. Sadr secured the remaining seats on Nov. 25 when he met with independent members who had won 43 seats.

Yesterday's vote was a clear indication that Sadr’s majority government is moving ahead. Halbousi has received 200 votes against his rival, Mahmoud al-Mashhadani, who was nominated by the Coordination Framework.

Members of the Framework left the hall prior to the vote as they felt Mashhadani would not win. Mashhadani himself also tried to postpone the session for another day, but after he faced objections from Sadrists and their allies, he left for the hospital, claiming he was attacked by Sadrists.

This did not stop the session, and Halbousi was finally elected. Sadrist parliament member Hakim al-Zamli and KDP parliament member Shakhawan Abdullah were, respectively, elected as first and second deputy speakers of parliament.

The next phase is to elect the president; this requires two-thirds of parliament members. But the main challenge will be electing the prime minister, which takes place after the president is elected.

On Jan. 7, current Prime Minister Mustafa al-Kadhimi traveled to meet Sadr at the cleric’s home in al-Hananah district in Najaf.

In response to Halbousi’s victory, Kadhimi tweeted, “A historic and great day for Iraq, and an opportunity for all to unite to build a strong state.”

Iran reportedly has sought to sway Kurdish and Sunni parties to avoid their aligning with Sadr, fearing that such an alliance would undercut the influence of those parties aligned with Tehran.

Their efforts seem to be so far unsuccessful.