Iraq's Sadrist movement head Muqtada al-Sadr seeks to lead the Shiite political decision and establish himself as the sole representative of the Shiites in the next Cabinet. 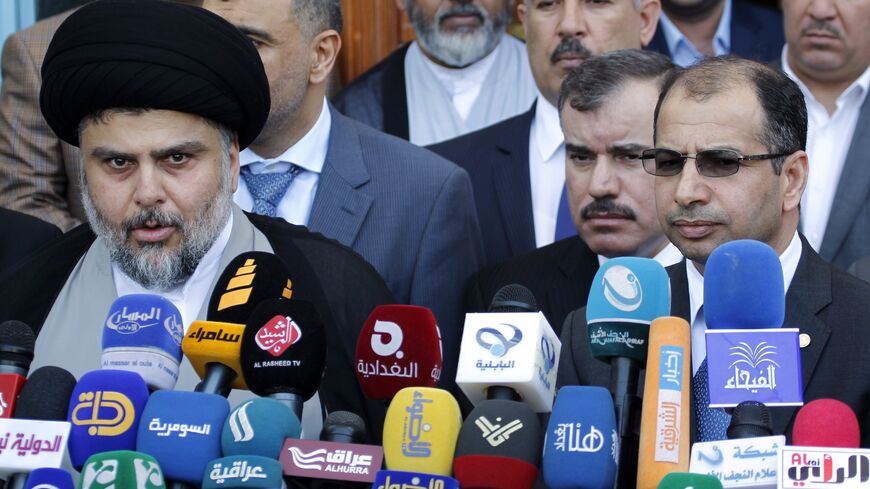 Iraq's political parties are going through a tough negotiation process to form the next government. While this been happening each time after an election, this is the first time that the inter-Shiite division casts a shadow over the entire Iraqi political scene.

Inter-Shiite divisions and tension have climaxed to the point of pushing regional and local parties to assume the role of mediator in a bid to bring closer the views between the vanquishers and vanquished in the elections that took place on Oct. 10, 2021.

This division would reshape political alliances and the next Cabinet, which may be the first government in which there is no representation of Iran's allies that had always been present and controlled the Iraqi governments since 2006.

The Sadr-KDP-Sunni alignment includes 162 seats of the 165 majority required to form a government – 73 from the Sadrist alliance, 54 from the Sunni blocks including Muhammad Halbousi's Taqaddom and Khamis Khanjar Azm, and 35 from the KDP.

With approximately 45 independents which the majority of them are are likely to align with the winners, the Sadr led group can form the government easily and they only might require a small number of representatives from the framework parties to close the deal on the election of the president that requires two third of the votes, 219 in particular.

On Jan. 31, Iraq's Sadrist movement head Muqtada al-Sadr welcomed a dialogue with “the national opposition,” after he reiterated his commitment to form a “national majority” government following the elections.

Sadr's position was announced after he met with his Kurdish and Sunni allies — Kurdistan Region President Nechirvan Barzani and parliament Speaker Mohammed al-Halbusi, at his residence in Najaf, the stronghold of the Shiite religious strength.

The pro-Iran Shiite parties fear that Sadr will solely ally with the Kurdistan Democratic Party, led by Massoud Barzani, and the sovereignty alliance led by Halbusi and Khamis al-Khanjar, in the Cabinet formation.

Sadr solely allying with the Sunnis and the Kurds implies that all other Shiites will not be included. Hence, Iran rushed to remedy the situation. Al-Monitor learnt that Iran's Quds Force commander Esmail Ghaani met with Massoud Barzani in Erbil in late January, and asked him not to ally with Sadr without including the rest of the Shiite parties.

Sadr did not shut the door in the face of his opponents or former Shiite allies. On Jan. 27, he arrived in Baghdad on a visit without any reasons. However, sources indicated that the visit aimed to send to his Shiite allies the message that it is about time for an alliance, based on his conditions. Yet he returned to Najaf without meeting with anyone.

Sadr's visit came two days after the Coordination Framework, which includes Shiite forces and parties, threatened to join the opposition’s ranks in case it was excluded from the next Cabinet that Sadr seeks to form.

Rahman al-Jubouri, former senior researcher at the National Endowment for Democracy in Washington, told Al-Monitor, “There is a great possibility that Sadr forms a government without the Coordination Framework.”

He added, “Sadr is seeking to monopolize the Shiite ministries.”

The Coordination Framework, which fears that Sadr forms a government alone, without including the rest of the Shiite parties, warned that "Iraq would pay the cost, especially in light of the security, economic and administrative risks and challenges facing the country and the region as a whole.”

The Coordination Framework’s statement came after Sadr tweeted Jan. 25 that he would form a “national majority government.” This nomenclature did not circulate before, and Sadr is considered to be the first to be using it.

Sadr does not want to form a majority government without including all Shiite parties. On the contrary, he wants to involve some of them, while excluding the State of Law Coalition, perhaps due to personal differences.

Sadr said in a speech Jan. 25, that he “sent a message to the Coordination Framework and informed them that he welcomes their presence in the government he seeks to form, except for Nouri al-Maliki.”

Zeidon al-Kinani, political researcher and doctoral student at the University of Aberdeen in Scotland, told Al-Monitor, “While Sadr is indirectly willing to form a consensual government with the Coordination Framework, he wants to make sure that it will have limited powers and influence by dividing it.”

He said, “Sadr wants to see the Coordination Framework without Maliki. That is his attempt to weaken the framework and reduce its strength.”

Sadr is now playing the role of the strong winner, and one can say that he is using this psychological card with the Coordination Framework, which is a rival for the Sadrist bloc supported by Iran, to not allow the Sunni and Kurdish parties to deal with Sadr solely.

A source close to the Coordination Framework told Al-Monitor, “Sadr is using that as a pretext. He does not want to involve the framework, but rather some parties within this framework, such as the Hikma Bloc led by Ammar al-Hakim and Al-Nasr Alliance led by Haider al-Abadi.”

Sunni and Kurdish parties are currently seeking to bring closer the views between Sadr and the Coordination Framework and to create an understanding between them, following the delivery of messages from Iran and its allies at home that “an alliance with Sadr without us will deepen the crises and portend great dangers.”

The Sunnis and the Kurds do not want to engage in problems with the armed Shiite factions, especially since they are accused of having targeted Erbil airport several times as well as the headquarters of Halbusi’s party. This is why they tend to involve everyone, but not at their own expenses in the next Cabinet.

However, Sadr wants to control the entire Shiite share in the next government, and to present himself as the official political body representing the Shiites.