Iranian Quds Force commander Esmail Ghaani is seeking to maintain unity among the Shiite political ranks before the formation of the new government, including a role for parties affiliated with Iran. 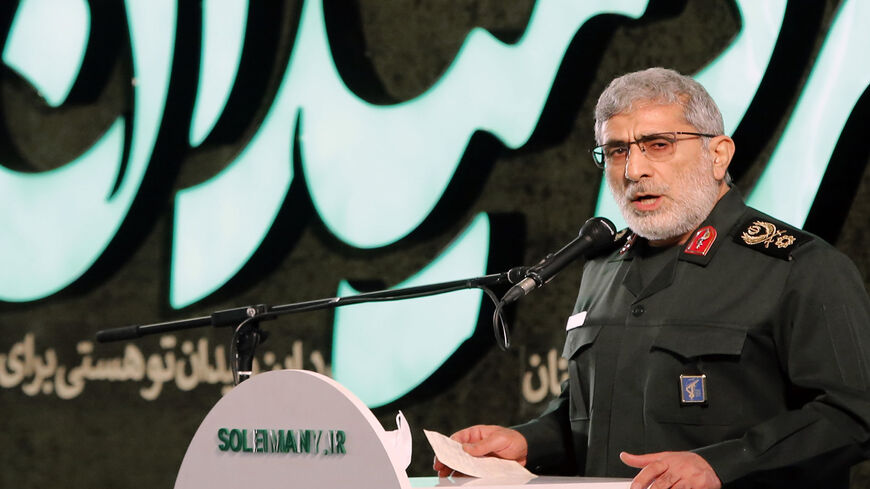 The official website of Muqtada al-Sadr, leader of the Sadrist movement in Iraq, published Feb. 8 a brief statement noting that Sadr received the commander of the Iranian Quds Force, Esmail Ghaani, that same day.

The website did not publish a photo of the two during the meeting, nor did it mention any details even after it ended. However, Sadr tweeted a few hours later, “Neither Eastern nor Western — a national majority government."

With the phrase “neither Eastern nor Western,” Sadr means that the government should be subservient to neither Iran nor the United States. According to Arabic Khamenei website, Sadr is quoting previous speeches by leader of the Iranian Revolution in Iran Ruhollah Khomeini.

This is the third time that Ghaani has visited Iraq after the approval of the election results on Dec. 27, to facilitate the formation of new government. He had previously tried to meet Muqtada al-Sadr, but it only happened in the most recent visit. Ghaani was carrying a message from the Iranian supreme leader, Ayatollah Ali Khamenei.

According to a source close to Sadr's office who spoke to Al-Monitor on condition of anonymity, “the message was regarding the necessity of preserving the Shiite house and bridging the gap between the Sadrist movement and the Coordination Framework that includes armed Shiite political forces objecting to the results of the recent elections.”

According to the source, Khamenei's message stressed “prohibiting division within the Shiite house."

He said, “Sadr told Ghaani to convey a message to Khamenei that he is proceeding with the majority government projects with the participation of some parties, not all of the Coordination Framework.”

He added, “During a meeting between Ghaani and the leaders of the Coordination Framework, he informed them of the need to preserve the unity of the framework, and not to go with Sadr divided. Ghaani told them, ‘Either you all go with Sadr or all of you join the opposition.’”

Ghaani, who fears division within the Shiite house, advised that Sadr allies with the Coordination Framework to create a Shiite parliamentary force, the source noted.

The current Shiite political division represents Iran's greatest challenges in Iraq, and perhaps in the region. The Shiite-Shiite conflict can undermine the influence Iran has achieved during the past 19 years, so Ghaani has made about four visits to Iraq since the beginning of 2022.

During these visits, he met with Shiite and Kurdish leaders, most notably Sadr and Massoud Barzani, leader of the Kurdistan Democratic Party. Leaked information indicated that Ghaani told Barzani that “going with Sadr without the other Shiite parties would endanger Iran's national security.” This was a warning and a threat.

Abbas Kadhim, Iraq Initiative director at the Atlantic Council, told Al-Monitor, “Iran’s interest in forming Iraqi governments includes preventing division among Shiite blocs and preventing strife between Shiites and Sunni and Kurdish forces that have ties with Iran, so that Tehran does not have to choose between its Iraqi allies and friends. Ghaani's task is to preserve the Iraqi consensus that Iran considers best for its interests in Iraq.”

He said, “Iran wants an Iraq that is strong enough to remain coherent and resistant to scenarios of chaos, but at the same time it does not want an Iraq that is too strong and threatens its interests.”

Kadhim noted, “Iraq is Iran's economic and geopolitical lung and is part of the geography over which its allies extend to the Mediterranean Sea. It does not want Iraq to be ruled by a party or an alliance that changes this equation.”

It cannot be said that Iran’s influence on Sadr is great, nor that it does not exist, which paves the way for several scenarios — the most prominent of which is that Sadr starts thinking about the possibility of reconsidering his choices. But this would probably not amount to a withdrawal from his positions toward Nouri al-Maliki and Qais Khazali, who represent the stumbling block to Sadr's alliance with the Coordination Framework.

Toby Dodge, professor of international relations at the London School of Economics focusing on Iraq, told Al-Monitor, “It seems that Iran is only now intensifying pressure on Sadr given his refusal to move toward a consensual government. However, if Sadr continues to refuse to agree to what Tehran wants, it does not appear that Iran, at least for the time being, is willing or able to force him to make concessions.”

Dodge noted, “I am certain that Ghaani has neither the influence nor the strategy of his predecessor Qasem Soleimani. I suppose he wants to persuade Sadr to agree to an inclusive consensual government, but he cannot achieve that.”

The role that Ghaani plays in Iraq today is weak compared to that of Soleimani, who had broader relations with Shiite leaders to unite their ranks, but also with the Sunnis and the Kurds.

Ghaani does not have the power to impose visions and requirements on the Iraqi parties. Rather, he tries, as much as possible, to preserve the gains achieved over the past years, especially in light of the possibility of some Coordination Framework parties forming a government with Sadr.

What Iran fears the most at the moment is Sadr’s success in dismantling the Coordination Framework and forming a government that includes Sunnis and Kurds, while excluding Iran’s most prominent allies in Iraq — Maliki and Khazali. So Ghaani’s shuttle visits between Baghdad, Erbil and Najaf must stop Sadr’s project aiming to form a “national majority” government.