What is Muqtada al-Sadr doing in Iran? 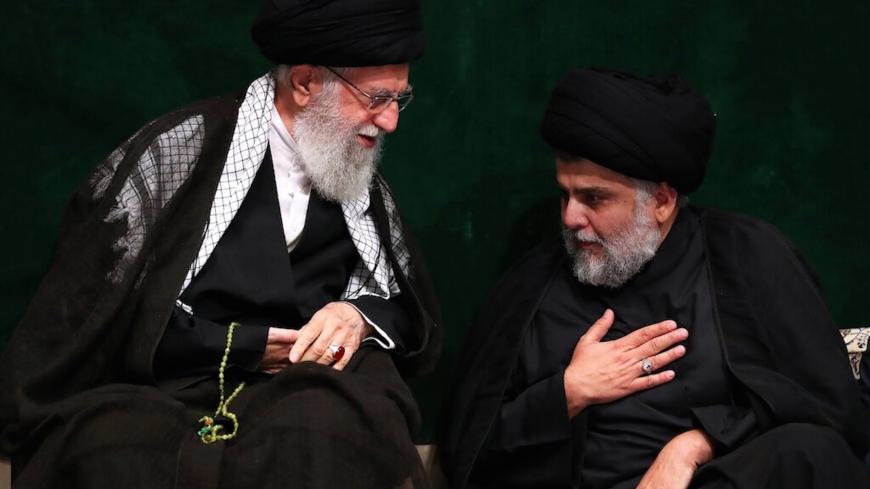 Sadr has criticized Iran’s regional policies, especially in regard to Iraq, since former Iraqi Prime Minister Nouri al-Maliki took office for the second time in 2010. Sadr showed a clear divergence from Iran, leaning more toward the Arab world and calling for Iraq to return to its Arab environment. The Arab world welcomed Sadr's continued criticism of Iraqi Shiite militias backed by Iran and their presence in Syria.

Sadr visited Saudi Arabia in August 2017, while the conflict between Iran and Saudi was growing. Crown Prince Mohammed bin Salman welcomed Sadr, and the mainstream Arab media praised him for his independent nationalistic position.

Sadr's presence at Khamenei's recent religious assembly has Iraqis asking questions. Former senior member of the Sadrist movement, Sheikh Ghaith al-Tamimi, commented on the issue, saying, “Who sits under the feet of the supreme leader cannot be the head of the Iraqis.” Tamimi was referring to how Sadr sat on the ground at the assembly and Khamenei sat in a chair. He added, “You [Muqtada] have devalued yourself before all Iraqis.”

Sadr left Iraq at the beginning of Muharram, about 10 days ago, following the controversial announcement of Popular Mobilization Units (PMU) deputy commander Abu Mahdi al-Muhandis that the PMU was forming an air force unit. When he left Iraq, he tweeted, “Farewell my country." In reference to the air force announcement, he said it was the end of the Iraqi state. "This is a transformation from a state of law to a state of riot. If the government does not take decisive actions, I’ll withdraw my support from it," Sadr added.

The senior leader of Sadr’s Sairoon Alliance, Sabal al-Saidi, said Sadr is performing a difficult job in terms of confronting the formation of a PMU air force, and he has already succeeded in preventing such a dangerous step.

Sadr's public presence between Khamenei and Soleimani is a clear sign that Sadr is discussing a political project with Iran.

Sadr has yet to remark upon his trip to Iran, but Al-Monitor has learned from a high-ranking, anonymous source in his office that he is trying to convince Iranians to replace Adel Abdul Mahdi with a stronger prime minister. Abdul Mahdi came into power with Iran's direct support, and they have been happy with his performance so far. Therefore Sadr is approaching them in this difficult time — as US sanctions on Iran become tougher — to convince them to remove Abdul Mahdi.

Sadr is not the only one working against Abdul Mahdi. While Sadr has criticized Abdul Mahdi, another Shiite cleric, Ammar Hakim, has formed a strong opposition against Abdul Mahdi. Hakim has also moved to form a shadow government in preparation for taking power if Abdul Mahdi fails to remain in office. Moreover, Hakim organized a wave of protests against Abdul Mahdi's government across Iraq last July, taking the lead on protests that Sadr had led for years. It seems Sadr's trip to Iran is a move to reclaim that lead from Hakim.

The differences between Sadr and Hakim come in the context of a long history of competition between the two families over the leadership of Shiite communities, especially in the religious seminary of Najaf.​

Sadr's presence at the assembly in Iran also indicates that he is trying to resume the role of Ayatollah Ali Sistani, the highest Shiite authority, in Iraqi politics. So far, Sistani has had the upper hand in forming governments and undertaking other big changes in the country. Now, Sadr — for the first time — appears between the two most influential figures in Iran, sending the message that he is representing Iraq in any discussion about Iraqi national matters.

Sadr's father, Mohammed Sadeq al-Sadr, criticized Sistani and called him a silent marja (religious authority), meaning he was too passive in political matters. The younger Sadr also started a war against US troops inside the city of Najaf in 2004 despite Sistani's objections and while he was on a medical trip to London.

These examples show the complexity of Iraqi politics. The map of political alliances is changing rapidly, and the political players are moving their agendas in multiple directions. In such an environment, Muqtada al-Sadr is the chameleon of Iraq's politics, someone who knows how to organize his moves and checkmate his opponents.